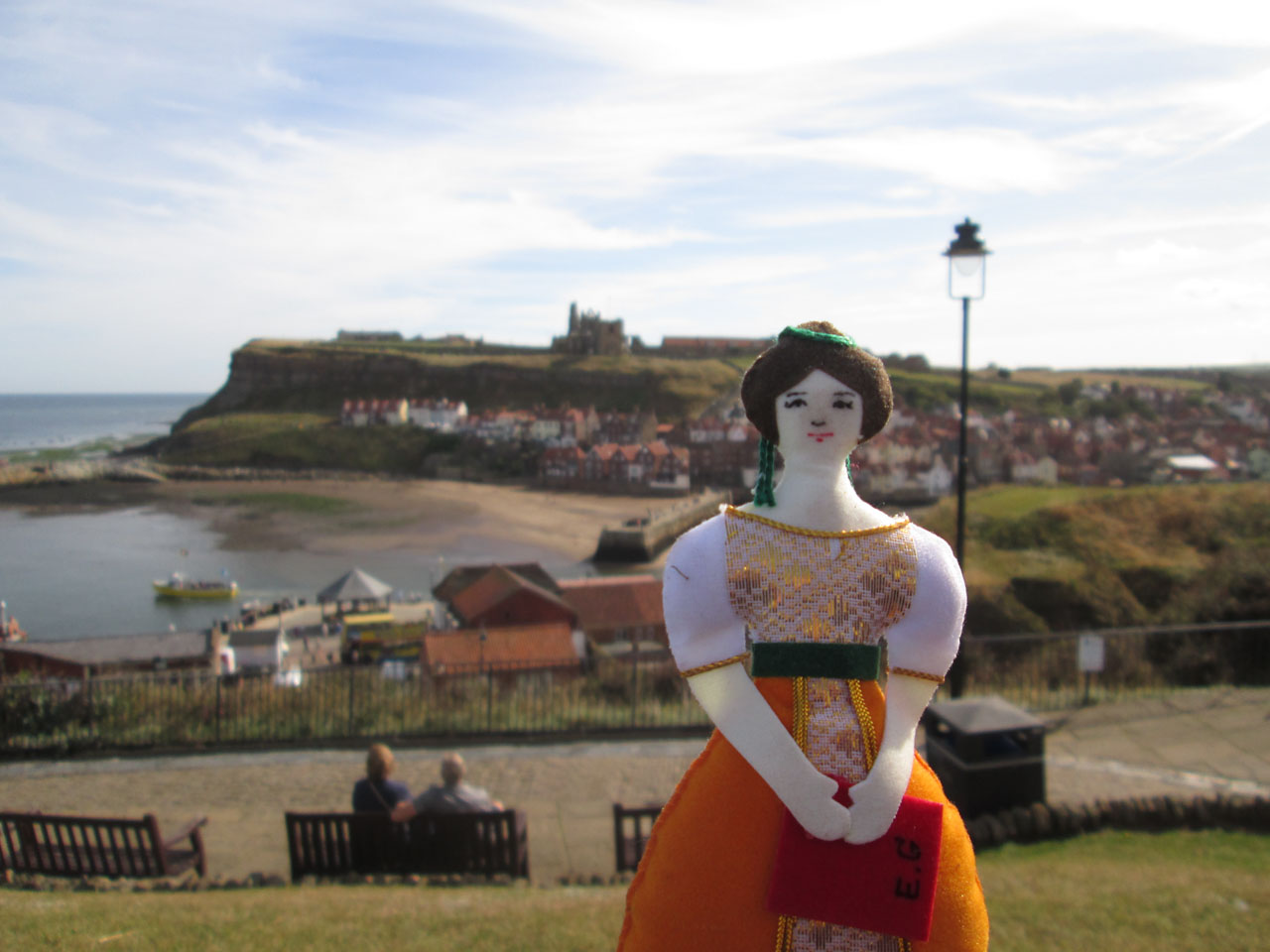 It’s November 1859 – and Elizabeth Gaskell is in Whitby

It’s Sunday October 30th 1859 and Elizabeth Gaskell is finishing a long letter to her friend, Charles Eliot Norton which she’d started five days before. She writes: I have missed the Saturday mail, – & Meta, Julia & I are going for a week or ten days to Whitby tomorrow.

And writing to George Smith on Wednesday November 2nd from Whitby, she says: We rushed here for 10 days on Monday… ( ) ‘We’ are Meta, & Julia – for whose benefit we are come, as she has outgrown her strength – six inches in the last 12 months.

While the trip to Whitby might have been to help Julia convalesce in the sea air, Gaskell spent much of her time collecting stories for her next book Sylvia’s Lovers, where Whitby is transformed into Monkshaven. The Whitby townscape is indeed still recognisable in her description of Monkshaven from chapter 2 of Sylvia’s Lovers:

The next turn of the road showed them the red peaked roofs of the closely packed houses lying almost directly below the hill on which they were. The full autumn sun brought out the ruddy colour of the tiled gables, and deepened the shadows in the narrow streets. The narrow harbour at the mouth of the river was crowded with small vessels of all descriptions, making an intricate forest of masts. Beyond lay the sea, like a flat pavement of sapphire, scarcely a ripple varying its sunny surface, that stretched out leagues away till it blended with the softened azure of the sky.

Gaskell, with her two daughters and Ann Hearn, took lodgings with Mrs Rose at 1 Abbey Terrace on the West Cliff. Abbey Terrace was part of a new residential development, financed by George Hudson in the 1850s to rival Bath and stimulate Whitby’s tourist trade. The house isn’t on the sea front but sits behind the Crescent – not quite premier Whitby accommodation!

In a letter to Marianne, written on Thursday 10th November, Gaskell reports: We are just going out. We do nothing but go out… But she put all this going out to good effect capturing Whitby stories to illuminate Sylvia’s Lovers as she explored the town and walked to St Hilda’s Abbey. Jenny Uglow reports that Elizabeth Gaskell spent time with Mrs Rose’s mother, Mrs Huntrods, listening to her reminiscences of the press gangs of the 1790s when she was a girl and living in one of the yards off Whitby’s cobbled main street which runs parallel to the harbour. She met John Corney who remembered the press gang riot of 1793 and who lent her his copy of Young’s History of Whitby. And she reciprocated by sending him an inscribed copy of Sylvia’s Lovers when it was published.

She also took time on 10th November to write to George Eliot, who she had just confirmed was the author of Scenes from Clerical Life and Adam Bede:

Since I heard, from authority, that you were the author of scenes from ‘Clerical Life’ & ‘Adam Bede’, I have read them again; and I must once more, tell you how earnestly fully, and humbly I admire them. I never read anything so complete, and beautiful in fiction, in my whole life before.

It seems likely from her letter to Marianne from the 10th November, that Gaskell and her two girls left Whitby on Monday 14th November. She writes: It rains here today, – besides being desperately cold. Julia is quite well now. ( ) I think we shall go home too on Monday.

We stayed in the wonderful Pigsty, outside Robin Hoods Bay which is managed by the Landmark Trust. Built by Squire Barry of Fyling Hall, who decided that his lucky pigs deserved a classical sty inspired by the architecture he’d enjoyed on his Grand Tour in the 1880s , it is now a cottage for two. All Landmark properties have extensive libraries of books of local interest, so no surprise I found a copy of Sylvia’s Lovers! Elizabeth Gaskell would have approved.