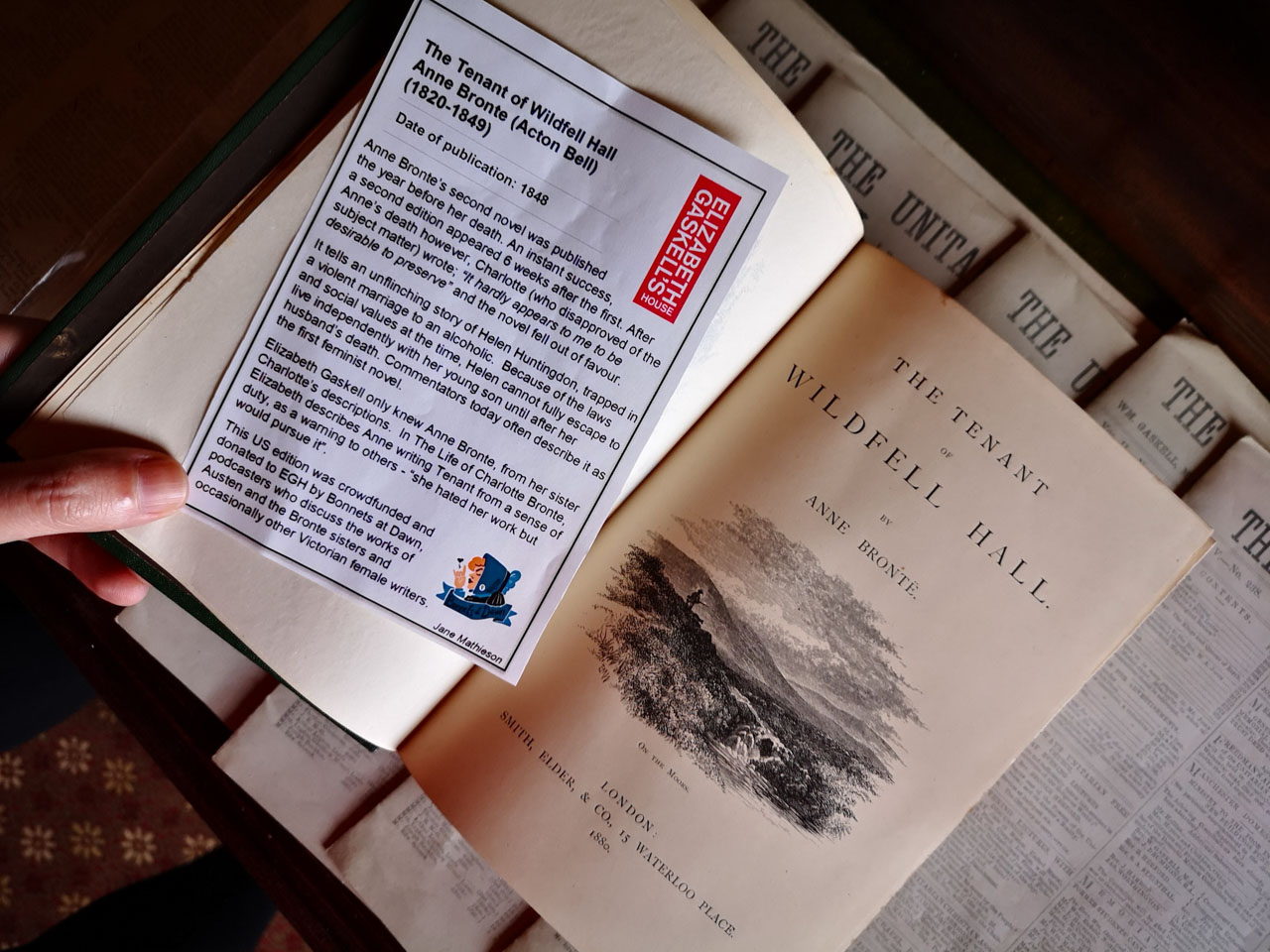 The Tenant of Wildfell Hall – A new book for our collection

We have recently added a splendid edition of Anne Bronte’s controversial novel The Tenant of Wildfell Hall to our collection. The book has been donated, following a crowdfunding appeal, by Bonnets at Dawn, a social media/podcasting duo who regularly discuss the works of Jane Austen and the Bronte sisters, with occasional detours into the works of other nineteenth century female writers.  Bonnets at Dawn, otherwise known as Lauren Burke and Hannah K Chapman (based in the UK and the US),  have visited Elizabeth Gaskell’s House more than once and are now well acquainted with the stories of Charlotte’s visits to 84 Plymouth Grove and the controversies surrounding Elizabeth’s biography The Life of Charlotte Bronte.

Why have Bonnets at Dawn donated a book?

Some time ago they became aware of a letter by William Gaskell that had come up for sale. Generously they thought of us and began a crowdfunding appeal to buy it. Unfortunately Elizabeth Gaskell’s House does not hold original archives and lacks suitable conditions in which to do so. John Rylands Library in Manchester however, does hold Archives and has a large collection of Gaskell-related manuscripts. They were alerted and managed to successfully buy the letter , so it has found its way back to Manchester where it was originally written.

With their crowdfunding appeal, the Bonnets had managed to create a spark of interest in funding literary donations to the House and we do have a collection of nineteenth century books. It was suggested to them, that we would eagerly accept donations of 19th Century books that had particular significance for the Gaskell family. Books by the Bronte sisters must be at the top of that list.  Elizabeth Gaskell never met Anne Bronte as she had already died before her first meeting with Charlotte, but she had heard much about her. Charlotte vividly described the life of all her family to the ever- eager listener at their meetings together. Anne is an integral character in the biography The Life of Charlotte Bronte even though Elizabeth never had the opportunity to form her own first-hand opinion.

In The Life, Elizabeth is rather dismissive of The Tenant of Wildfell Hall, describing its authorship as a labour of duty at odds with Anne’s “sensitive, reserved and dejected nature”. Her view, guided by Charlotte’s, is that Anne had brooded on her brother Branwell’s alcoholism and addictions and felt an obligation to describe them as a warning to others “she must be honest, she must not varnish, soften or conceal”. Anne defends her choice of subject matter in a preface to the second edition, saying “My object in writing the following pages was not simply to amuse the Reader, neither was it to gratify my own taste, nor yet to ingratiate myself with the Press and the Public: I wished to tell the truth, for truth always conveys its own moral to those who are able to receive it”…” when we have to do with vice and vicious characters, I maintain it is better to depict them as they really are than as they would wish to appear”. Charlotte felt that the subject matter was too much at odds with Anne’s reserved and gentle nature and that she was misguided in writing it. This was the rather patronising view that she managed to convey to Elizabeth Gaskell and it is a pity that we do not have a record of Elizabeth’s own reaction to the work, which she must have read.

Elizabeth does acknowledge the book’s success on publication and the fact that an American publisher thought it superior to both Jane Eyre and Wuthering Heights, whilst under the misapprehension that they all had the same author.

Today, The Tenant of Wildfell Hall has been rediscovered and is hailed as a classic, possibly the first, piece of feminist fiction. In a 2016 BBC programme Being the Brontes and in a companion article that appeared in The Guardian 26.3.2016  journalist Lucy Mangan champions Anne Bronte, saying that “to read it ( Tenant of Wildfell Hall) is to be armed forever against the traps into which the unwary Helen fell. Anyone who professes not to understand “why women stay” should read it- and be re-educated from top to bottom”. 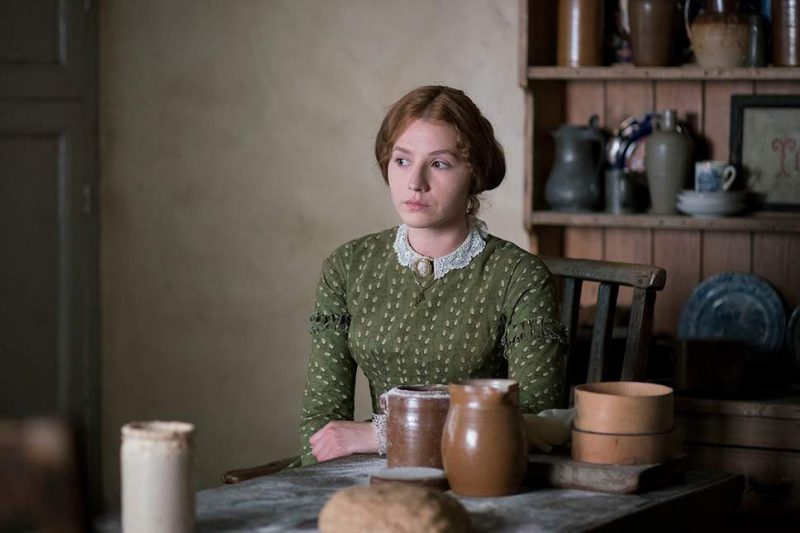 Anne Bronte depicted in the BBC production of To Walk Invisible

As an independent woman and the mother of four daughters I am sure that Elizabeth would have felt deep sympathy for Helen Graham, the central character of Tenant, if she had not been somewhat prejudiced against the book by Charlotte. Lucy Mangan continues “Context matters, especially when it contains an elder sister with a particular set of ideas fixes.  But to read the book now in a contemporary context is a liberation. We can see what her sister –  or Elizabeth Gaskell –  “could not. We are not blinded like Anne’s critics by her “coarseness” nor distracted by speculation about her sex.”

We are delighted to be able to give a home to this special edition of The Tenant of Wildfell Hall for all visitors to see and hope that those who generously donated funds towards its purchase will be able to view it for themselves in its place on the shelves of Elizabeth Gaskell’s House. 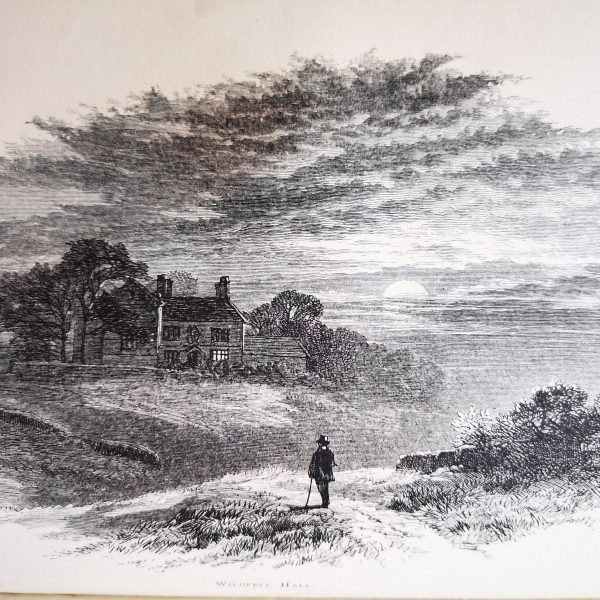 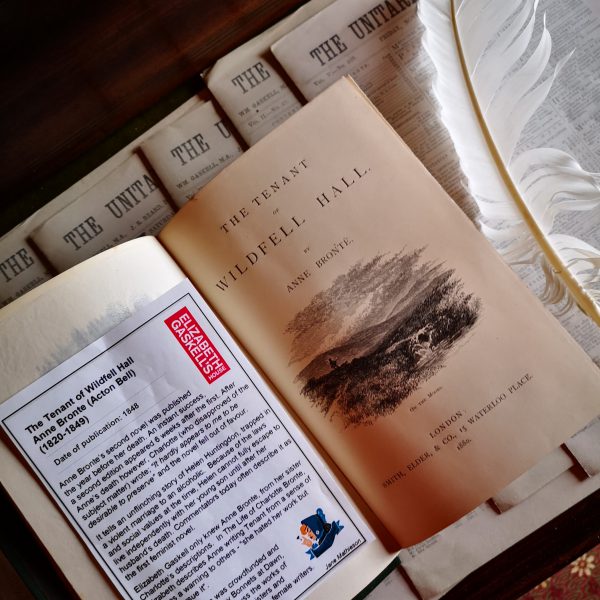