William Gaskell’s study is home to a collection of mainly 19th Century books which have reached Elizabeth Gaskell’s House through a variety of purchases and donations. I am currently creating an inventory of these books, which includes a note of any inscriptions or ownership attributions inside, thinking that some of these former owners will turn out to be interesting in themselves.

On the shelves are over 50 titles by John Ruskin, the leading art critic, artist and polymath of the Victorian age, as well as a number of biographies of him.  Elizabeth knew and admired Ruskin very much and once declared she would choose his Modern Painters as the book she would take with her if she were “shut up in prison or on a desolate island”. Ruskin visited the Gaskells at Plymouth Grove and Elizabeth visited him in London. Her daughter Meta, a gifted artist, was particularly drawn to friendship with Ruskin and his pre-Raphaelite circle of  artist acquaintances. 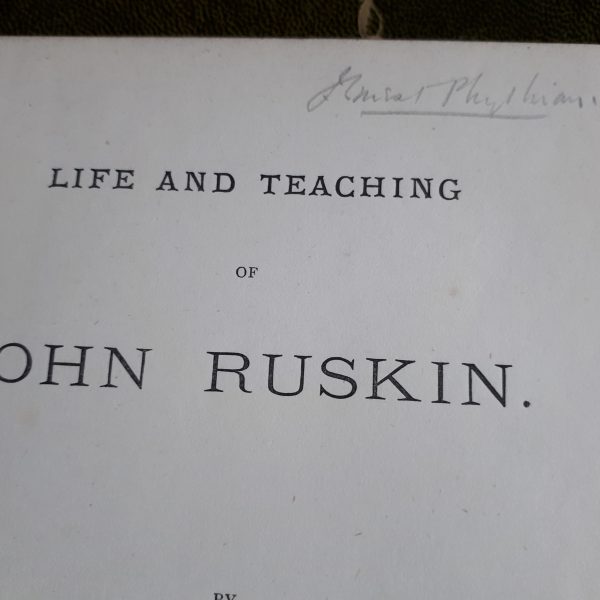 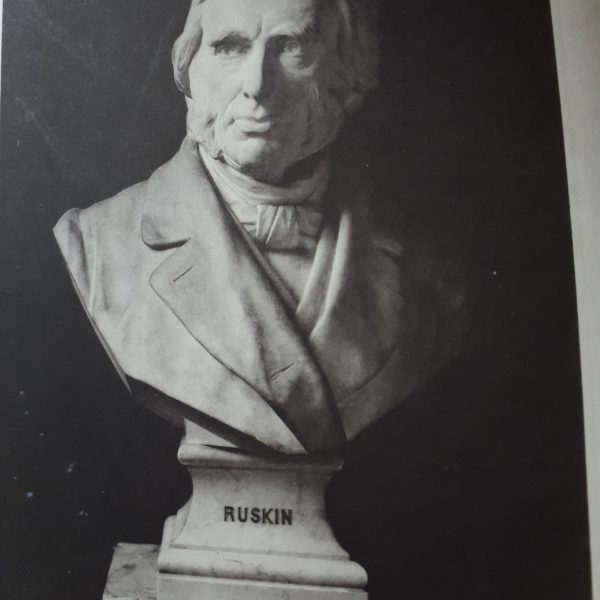 Almost all the Ruskin titles at Elizabeth Gaskell’s House carry a stamp on the first page which says “Donated by Dame Mabel Tylecote, D.B.E., B.A., PhD. A quick internet search tells me Dame Mabel’s dates were 1896 – 1987, so clearly this Ruskin collection did not come directly from her to the house in Plymouth Grove,  which was only restored in 2012/13. So who was Dame Mabel Tylecote and how did this substantial collection reach us? 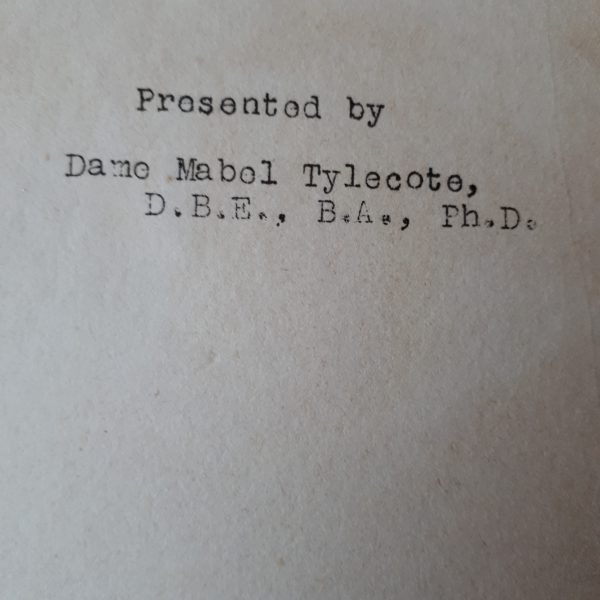 I was spurred into exploring this question further by the current “Women who Shaped Manchester “ exhibition at the John Rylands Library, which highlights significant women in Manchester’s late 19th/early 20th Century history. The exhibition picks out some key pioneers; one or two we have all probably heard of already- Emmeline Pankhurst (politics) and Annie Horniman  (theatre),  but others are less well known and deserve attention. Who should feature in the first display case but Dame Mabel Tylecote!

I learn from the exhibition that Dame Mabel was a pioneer for women’s education and became a leading figure in Manchester’s political and civic life. She studied and later lectured in history at the University of Manchester. She wrote a landmark book The Education of Women at Manchester University 1883-1933.

She stood unsuccessfully in 5 parliamentary elections, but did become a councillor for Manchester’s Collyhurst ward and fought to improve housing and health services as well as education. She was made a Dame in 1966 for “political and public services”.

Wanting to know a little more, I discover that Mabel was largely educated at home and was very influenced by her father John Ernest Phythian, whose faint pencil signature also appears in many of the books. He was a country solicitor who much admired Ruskin and who in middle age, gave up country practise to become an extension lecturer in art history for Manchester University. It is highly probable, therefore, that Dame Mabel inherited these books on Ruskin from her father.

John Ernest Phythian 1858-1935, wrote several books on art history as well as editions of a handbook of the permanent collection of paintings held by the Manchester Art Gallery in the early 20th Century. He was also the first Chairman of the Ruskin society in Manchester. He would have been too young to remember Elizabeth Gaskell, but perhaps he met William or Meta? And did he ever meet Ruskin? These questions remain to be answered.

In William Gaskell’s time the Unitarians ran a school for children and adults on Lower Mosley Street. When the Midland Hotel was to be built on the site in 1898, a new building, the College of Adult Education on the other side of Lower Mosley Street, replaced it. By the early 1970s the Manchester Education Committee had taken over the College from the Unitarians and moved it to another new building, on the corner of Oxford Road and Cavendish Street. In 1991 this building became part of Manchester Metropolitan University and was renamed the Mabel Tylecote Building.

At some point in her lifetime Mabel Tylecote presented the Ruskin volumes to the College Library. When the College of Adult Education was closed these volumes were left in need of a home, which they have now found in the study at Elizabeth Gaskell’s House. 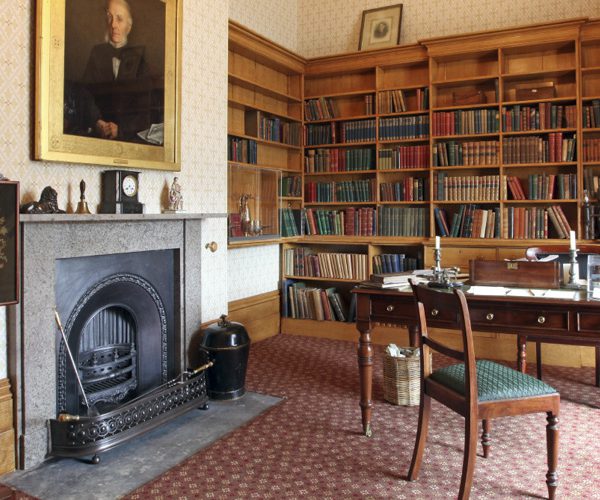 The House currently holds 58 volumes by John Ruskin and the collection reflects his wide ranging interests. As well as editions of his most famous works Modern Painters and The Stones of Venice, my favourite title from our collection is The Ethics of The Dust: Ten Lectures to Little Housewives, which isn’t a treatise on cleaning but is actually a series of essays on minerals and crystallisation presented as a dialogue between a teacher and a group of schoolgirls. As well as being a leading artist and art critic he wrote widely on subjects such as Architecture, Geology and Political Economy. I wonder if Elizabeth Gaskell would have enjoyed them all, if they had been available to her ?

The Mabel Tylecote building has now also been recently demolished, which seems to bring an end the connections between Adult Education in Manchester and the Unitarians. But it is worth celebrating Manchester Metropolitan University’s firm foothold in the city’s vibrant educational infrastructure which I am sure Dame Mabel would have applauded and we hope she would agree that Elizabeth Gaskell’s House is now an appropriate home for her father’s volumes.