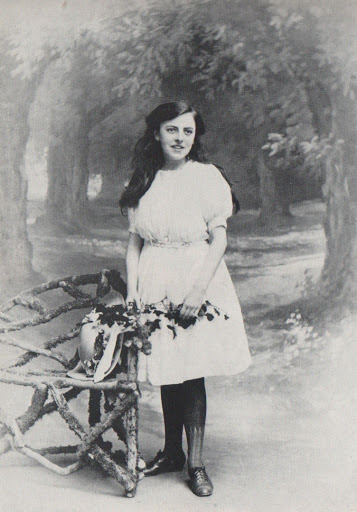 In the second of our Lockdown 2.0 blog series, I’m exploring the Manchester connections of Dodie Smith, who is probably best known as the author of One Hundred and One Dalmatians – released as an iconic animated film by Disney in 1961, and again as a live action film with the wonderful Glenn Close as Cruella de Vil in 1996. One of my best remembered moments of high cinematic tension comes from the 1961 animation, holding my breath until Pongo finally gets that plump little puppy through that tiny hole in the Great Escape! She is also the author of the much loved – and dramatised – I Capture the Castle, named in 2003 as one of the nation’s hundred best loved novels in the BBC’s The Big Read.

Dorothy Gladys Smith was born on 3 May 1896 in Whitefield in North Manchester, as Meta and Julia Gaskell were living in the Gaskell family house in Plymouth Grove. When her father, Ernest Smith, died in 1898, her mother Ella moved back to her family home to live with her parents, William and Margaret Furber. The house on Talbot Road in Old Trafford is still there and suitably blue plaqued. In the 1890s, Kingston House was ‘so quiet and semi-rural that the corncrake could still be heard’ though it would have to be a very lost and disorientated corncrake to find itself today on what is such a busy road!

Also living with her maternal grandparents were her two aunts and three uncles. She writes about her early life in Manchester in Look Back with Love – a Manchester Childhood, the first volume of her four part autobiography which was published between 1974 and 1985.

Dodie Smith would probably have described herself as an actor and a playwright rather than a novelist, and especially so when she was a young woman. She credits her family with giving her the three reasons why she became a playwright: her grandfather, as an enthusiastic theatregoer and with whom she discussed playwrights and the nature of the theatre; her uncle Harold Furber, who was a keen amateur actor; and her mother who had had ambitions to act.

Her mother re-married when she was fourteen and she moved to London. She later attended RADA though on leaving she had little success as an actor. It was in 1931, while she was working as a toy buyer for Heals, and writing as as C L Anthony, that her first play Autumn Crocus was staged and she achieved overnight success. During the 1930s and early 1940s , she wrote seven plays of which Autumn Crocus and Dear Octopus, written in 1938, were probably the most successful.

She moved to America in the mid 1940s with her husband Alec Beesley, and it was here and homesick that she wrote I Capture the Castle which was published in 1949.

It wasn’t until she moved back to London in 1953 that she wrote One Hundred and One Dalmatians. She loved dogs and kept dalmatians as pets – in 1943 she had seventeen! The first dalmatian she owned was called Pongo – our hero.The idea for the book was born when, looking at her dogs, one of her friends observed ‘Those dogs would make a lovely fur coat!’ And a wonderful book and two marvellous Disney films too!

The lovely copy of I Capture the Castle photographed above is from our store of second hand books. Our legendary secondhand book sale is held every second Sunday of the month – check our What’s On page for details.

This is the second blog in this series about Manchester women writers. Read about Frances Hodgson Burnett who features in the first here.