Come in through the front door of Elizabeth Gaskell’s House and look to the right. You will find yourself looking into William Gaskell’s study with its large library table positioned in front of original bookshelves and their collection of 19th century books. William’s benign portrait gazes down from above the fireplace.

Imagine yourself as William sitting in a chair behind this desk, writing a sermon or notes for a lecture, looking out of the window onto Plymouth Grove and wondering who is going to pull the bell-pull next.  The room is likely to have been hot, with the fire well stoked. On cold winter evenings the shutters would have been closed and the curtains pulled across to keep out draughts. It is easy to conjure up a serious yet cosy scene. 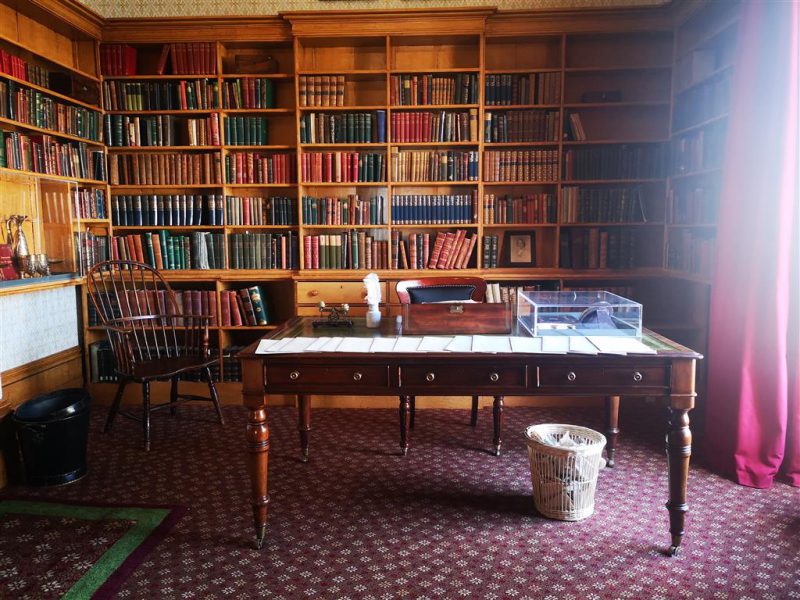 There are many stories about the furnishing of the house in Elizabeth’s letters. The one about William’s desk is particularly vivid. In a letter dated Tuesday(?) April 1855 Elizabeth Gaskell writes to Marianne from London, about a library table she has found in the Baker Street Bazaar “ mahogany, three drawers on each side, dark green leather top, five feet six inches in length, price £6… it is in first rate condition, as good as new!” She hasn’t yet bought the table as she is anxious to check that it will fit the space. She exhorts Marianne and Hearn (the housekeeper) to measure the size and see if it will fit.  She needs her answer by Thursday morning. We must assume she got her prompt reply.

It is worth digressing here as there is some very colourful history attached to the Baker Street Bazaar in London. Elizabeth will not have known of this, as the story developed long after her death, but she could well have met the proprietor, one Thomas Charles Druce who successfully ran the Bazaar until his death in 1864.  The Bazaar, a shop half way along Baker Street sold carriages, ladies’ requirements (!) and furnishings. The upper floors of the building housed Madame Tussaud’s waxworks for several years.

In 1898, long after his death, Thomas Charles Druce became the subject of a long series of legal cases instigated by a daughter-in-law Anna Maria who was probably actively seeking a source of wealth following the early death of her husband Walter, one of Thomas Charles’s sons. She stated that in 1874 she had met a Dr Harmer, then resident in an insane asylum, whom she was convinced was T C Druce. She then developed her story in various ways, claimed that a number of peers were involved – and that T C Druce was also the fifth duke of Portland in disguise. One of her more bizarre claims was that a tunnel linked the Bazaar in Baker Street to the London residence of the 5th Duke of Portland.

Over a long period of time and following several court cases Anna Maria’s claims were dismissed and she also eventually died in an insane asylum. However there were protracted repercussions for the remaining Druce family which stretched as far as New Zealand and involved many false witnesses and embellished tales of false identity and impersonation. The cases only ended with the exhumation of poor Thomas Charles’ body in 1907 when it was proved that it was indeed him in his coffin. The whole strange and tangled tale is rather too complex to be recounted here but can be read at this link https://www.historyfiles.co.uk/FeaturesBritain/Modern_DrucePortland01.htm

I’m sure Elizabeth would have found this involved tale very fascinating and it could have added a whole new aura to William’s desk for her.

The table in the study now is not the original table and was probably not handled by Thomas Charles Druce. That one will have been sold in the auction of house contents in 1914. But the restorers managed to find a mahogany “partner” desk with 3 drawers on each side and a green leather top and this represents a fine example of the carefully researched furnishing of the house back in 2012/13 when it was being prepared for opening. 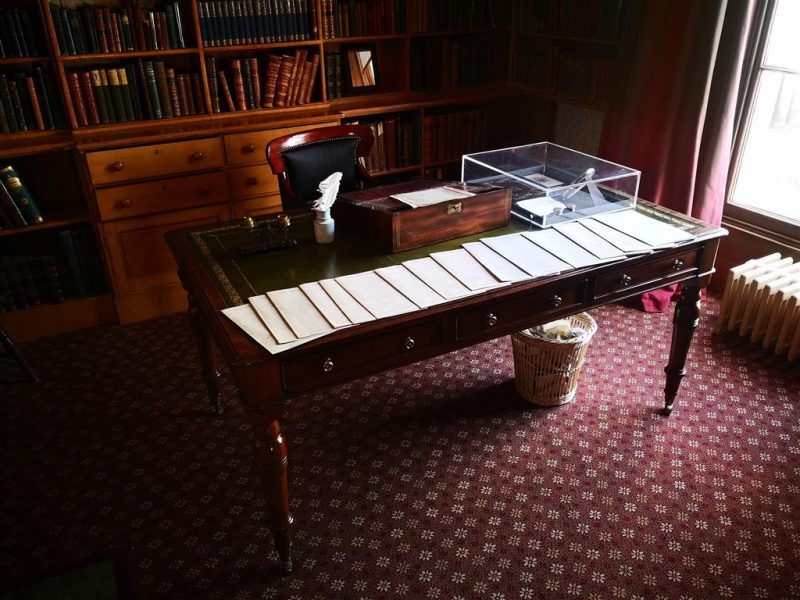 On the table are a few of William’s own possessions including a tooled leather blotter and inkwell. There are also some other objects likely to have been present: balances for weighing letters, a writing slope and copies of The Unitarian Herald which William edited for around 10 years. Elizabeth referred to this as “the plaguing Unitarian Herald; which takes up six or seven hours a week   (at the office) & a great deal of odd time at home”.  Jenny Uglow in her extensive biography of Elizabeth Gaskell notes that the family wished he would at least hand over the Herald to younger men but also quotes Elizabeth saying “I think he really likes all these things…And when he is at home we only see him at meal-times”.

So, to end where I began, think of William happily ensconced in his study, away from the hustle and bustle of the household, at his desk writing , reading, teaching and receiving a stream of callers from the many Manchester organisations he worked with. His library table was put to very good use.