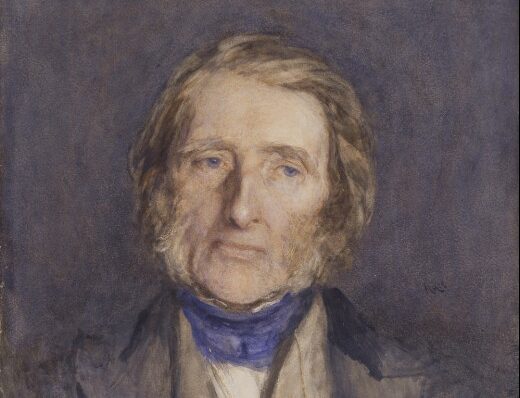 There is a deep blue aconite coming to the end of its flowering in the garden at present. It is almost the same shade of blue as the cravat worn by John Ruskin in the portrait painted of him in 1879 and now in the collection of the National Portrait Gallery. Apparently, John Ruskin liked the colour blue, particularly sky blue. It was his study of the change in the colour of the sky that lead him to write about the damaging effects of pollution in The Storm Cloud of the Nineteenth Century. The flowering of the aconite is a good opportunity, following the earlier blog about alpine strawberries, to pay a second garden tribute to John Ruskin in his centenary year.

John Ruskin had a long-standing interest in botany. A booklet, written by David Ingram, Honorary Professor, Lancashire Environment Centre, University of Lancaster and published in 2016 by The Guild of St George, discusses John Ruskin’s own botanical classification system.

He illustrated his system by taking apart and rebinding with interleaved pages of his own comments, two published botanical books by Baxter (1834-43) and Sowerby (1832-1840). In his reordering Ruskin kept the established botanical names but rearranged the plants on the basis of “unrelated, idiosyncratic and subjective criteria” (Ingram, page 4). These included colour, petal size, habitat etc. He ignored existing systems of classification including the male and female characters of the plants.

However, by using colour and habitat and similar criteria, Ruskin was making it easier for an amateur to identify a plant.

One of the Ruskin created classes is “Hoods” and his description of orders within this class of plants are sometimes whimsical and sometimes based on stereotypes we would not want to subscribe to. Among the whimsical is Order 2, “Knight’s Hoods-known by attached spurs” to which aquilegia belong. We had a good display of these in the garden earlier in the year.

Other “Hoods” in this class are “Sailors Hoods” of which ajuga is an example which grows on the edges of the fern bed in the front garden. With the next two we move into stereotypes we would no longer wish to subscribe to. Firstly, “Old Ladies Hoods” “Generally stooping or creeping; and very good for making tea or medicinal draughts”. Thyme is an example of this and we have used it around the cold-frame. The second is”young Ladies Hoods” “Generally pleasant to behold, an serviceable in households”. The sweet pea is an example of this.

And to finish with the Hood we started with Monk’s Hoods such as foxgloves, here shown growing in the garden at Brantwood, Ruskin’s home in the Lake District.

and the dark blue aconite now to be seen in the garden at Elizabeth Gaskell’s House.

« “Will you walk into my parlour?”
Volunteers on Tour : Samlesbury Hall »