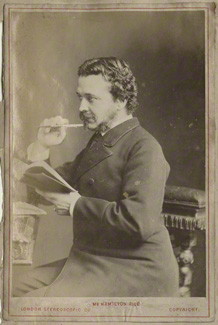 On March 28 1862. Elizabeth Gaskell writes a letter to George Smith, her publisher: It seems to me that you must have been thinking me very ungrateful inasmuch as all this time I have never thanked you for Mr Aide’s book. But at first I was ill(whh made the gift all the more valuable;) and then I thought I would read it first: and very pleasant it was to be carried out of murky smoky Manchester into something so purely Italian as the beginning is, – it is a regular atmosphere of Italy; I like the story much the best of any of his, don’t you?

So who is this mysterious Mr Aide? I’d never heard of him and certainly never read any of his books. Elizabeth Gaskell was obviously familiar with his work and had read other books of his. Time for some literary detective work!

Mr Aide is Charles Hamilton Aide. Born in Paris on November 4 1827, his mother was the daughter of Admiral Sir George Collier and his father George Aida, an Armenian merchant. ( Surely there’s a story here?) When his father was killed in a duel in 1831, his mother brought him to England. (And another story here?) He went to school in England and after attending university in Bonn, joined the British Army, leaving after seven years as a Captain. He settled back in England, living with his mother in Hampshire until her death in 1853 when he took rooms in London, though he spent much of the year travelling.

He was a man of considerable artistic talent: he wrote novels, songs and plays which were very popular in his day as well as being a skillful amateur artist. And he was a prominent player in London’s literary life. The Dictionary of National Biography describes him as a man of versatile accomplishments and abundant social gifts who devoted himself with equal success to society, music, art and literature while, perhaps less kindly, his friend Henry James called him The Diane de Poitiers of our time.

The book Gaskell is referring to in one of his most popular, Carr of Carlyon, which was published by Smith, Elder in 1862. George Smith seems to be promoting one of his stable of authors when he sends her a copy of the book , though knowing her love of Italy, it is a kind gift. And to be reading it in March means it’s hot off the press. The other work she would have known would be a volume of poetry Eleonore and Other Poems, published in 1856 and Aide’s first novel Rita, an Autobiography published by Bentley in 1858.

Gaskell wasn’t impressed with Rita when she read it, commenting in a letter to Smith written on February 14 1859 : It introduces one just exactly into the kind of disrepuble (sic) society one keeps clear of with such scrupulous care in real life, – it is not merely one character that is none of the best, – but every one we get a glimpse of is the same description of person. I don’t think it is ‘corrupting’, but it is disagreeable, -a sort of dragging one’s petticoats through mud.

But did Gaskell know Charles Hamilton Aide? And the answer is a resounding yes! She probably met him in 1857 – note to self, read Jenny Uglow’s biography with more attention! – and introduces him to George Smith in 1858 when Mr Aide is looking for a publisher for – possibly – Carr of Carlyon? This introduction does perhaps explain the gift of the novel to Gaskell on its publication. A gentleman, who is rather more than an acquaintance & less than a friend has asked me for an introduction to you, with a view of submitting a MS, (nature unknown,) to you. I have ventured to give it, & I shall be much obliged to you if you will ‘honour’ it. His name is Hamilton Aide. His mother was a rich Scottish heiress, his father a Greek exile, of good character; Mr Aide, pere, is dead; the son lives with his mother now, has been a captain in some rather crack regiment, but is now living in Hampshire, All that I know of him is that he & his mother have shown us great kindness in Paris & Rome ; that he acts beautifully in French or English private theatricals, sings enchantingly ( you could not transact your business with him in a duett, could you? Without any disparagement to your possible musical talents I think you would be a gainer by any mode of hearing him sing,) draws passably – and is altogether full of tastes – about the talents I am not so sure.

On February 10 1859, she writes about him again to George Smith: Nor am I in any hurry to express what I know will be my opinion (of Rita) to Mr Aide; for I like the little gentleman, – though I think he has too many tastes ever to excel in any one pursuit – He is writing /and composing/ an Opera now. Next he will be painting for the Exhibition. But he is to be liked, and I think respected by those, who know his life.

The acquaintance continued for the rest of Gaskell’s life. Writing to Marianne in November 1859, she mentions she’s received a letter from Aide; in 1863 she is discussing plans for Marianne to visit the Aides. And Charles Hamilton Aide travelled to Knutsford and was one of the mourners at Elizabeth Gaskell’s funeral, so we must understand the friendship between them as sincere.

« And so, to bed…
Elizabeth Gaskell’s House to receive £33,000 from second round of the Government’s Culture Recovery Fund »