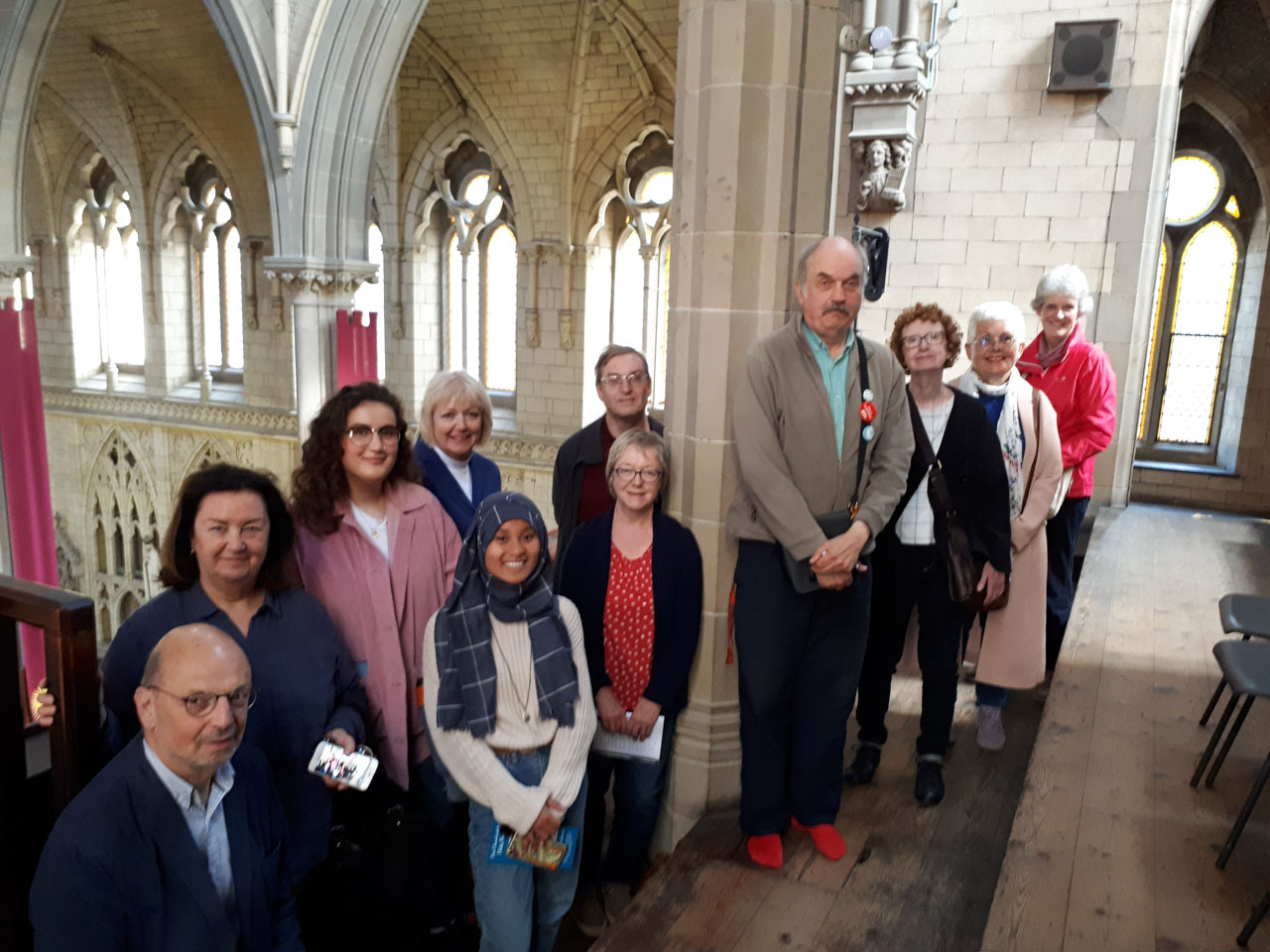 Volunteers on Tour: the Church of the Holy Name

It’s a long way theologically, but only a short walk geographically, from Elizabeth Gaskell’s House to the Church of the Holy Name on Oxford Road. A group of 10 volunteers, with staff member Dympna made a visit recently to this large Roman Catholic church not present in Elizabeth Gaskell’s lifetime, but which William would have been very aware of.

As a Unitarian Minister we wonder what William might have thought of the large and elaborate building which was being constructed close to home. The dictionary of Unitarian and Universalist Biography says  “Distrusting man-made ritual as much as man-made belief, Gaskell was especially unsympathetic towards Roman Catholicism. When his oldest daughter Marianne in 1861 returned from a trip to Italy wanting to join the Catholic Church, he and his wife made a great—and ultimately successful—effort to reclaim her for her childhood faith.” www.uudb.org/article/williamgaskell.html

The foundation stone was laid in June 1869. The church was designed by Joseph Hansom, inventor of the Hansom Cab, and opened for public worship on 15 October 1871. Despite being inspired by Chartres Cathedral which took a century to build, this one rose rapidly in only 2 years. It was able to go up so quickly as there is very little carved stone in the building. Much of the decoration is made from pre-moulded terracotta. The nave has elegant slender columns thanks to only having to support a lightweight roof made from hollow terracotta “pots”. The whole impression of the interior is light and elegant.

The church was built to accommodate at Sunday mass the recent large influx of labour from Ireland and Italy as well as from rural Lancashire and could seat a congregation of 1,000. 16 confessional booths testify to the great number of Jesuit priests who would assist in the church as well as to the demand from parishioners. 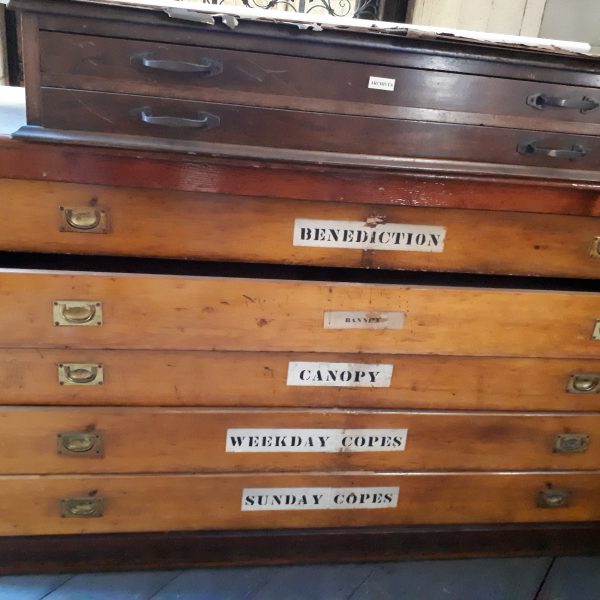 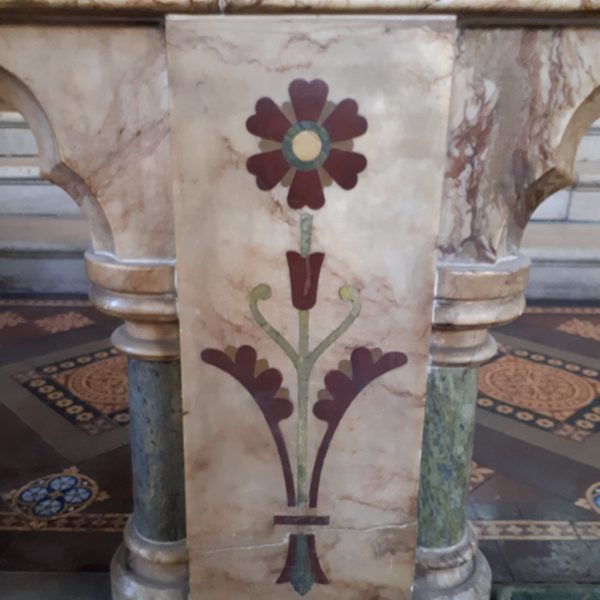 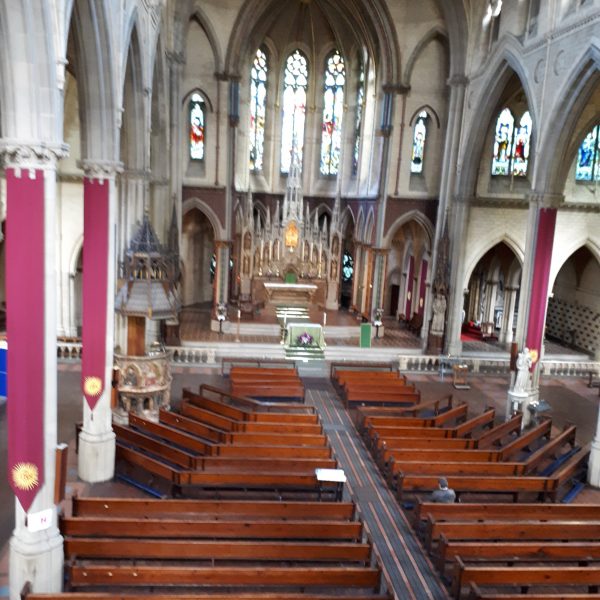 We were guided round the church and were able to look at its many fine features and decorations. As a Jesuit church it contains 2 statues of St Ignatius as well as one of St Francis Xavier, as well as many other statues There are a number of side altars and chapels and some beautiful mosaic work, particularly on it’s beautiful Derbyshire alabaster pulpit.

A small exhibition currently on display in the church includes maps of the area from different dates, showing the fairly empty district just edging Victoria Park, where Elizabeth Gaskell’s House sits, in the early 19th Century, to what became a densely populated area by the end of the Century. Following the 2nd world war, decline set in and much housing was demolished again during the 1960’s and 70s. The church has had to redesign its role in this changing area and now serves as the church of the Universities’ Catholic chaplaincy.

Towards the end of our tour we were led up to the organ loft to get a different perspective on the nave. Here we were shown a vestment chest which only fairly recently was found to contain all the original maps and plans for the construction of the church. These have been taken away for restoration and have now been digitised.

The distinctive tower was a later addition. Designed by Sir Giles Gilbert Scott and his brother Adrian, in Gothic style and built from Yorkshire granite to withstand the atmosphere of an Industrial city. The original plans had included a tower and tall spire but the city authorities prevented this as it was feared the weight would cause subsidence and affect the traffic on Oxford Road. The tower we see now was not added until 1928.

Despite a gulf of difference in doctrine and belief, I am sure that William Gaskell will have been in sympathy with much of the Jesuit ethos of travelling to where the need is greatest. Our guide told us much about the history of the Jesuits in Manchester and their involvement with the local community.

Over its 150 year history the church will have been the venue for countless baptisms, marriages and funerals. One of the largest events must surely have been the funeral of Charles Halle in 1895, when thousands were able to be present inside and out. The funeral sounds a magnificent event at which the congregation heard performances of both Mozart’s requiem and Beethoven’s Eroica symphony. As a young man Charles Halle, who lived close by visited Plymouth Grove to give piano lessons to Marianne .  I hope at least one of Elizabeth and William’s daughters will have attended the funeral of their former piano teacher and family friend.

The church is open daily and welcomes visitors. Whether like me, you have lived in the area for a long time and never been in, or if you are newly arrived, do step in and take a look. It is one of Manchester’s glories.

« Constance Harper’s songs at Plymouth Grove
“Will you walk into my parlour?” »