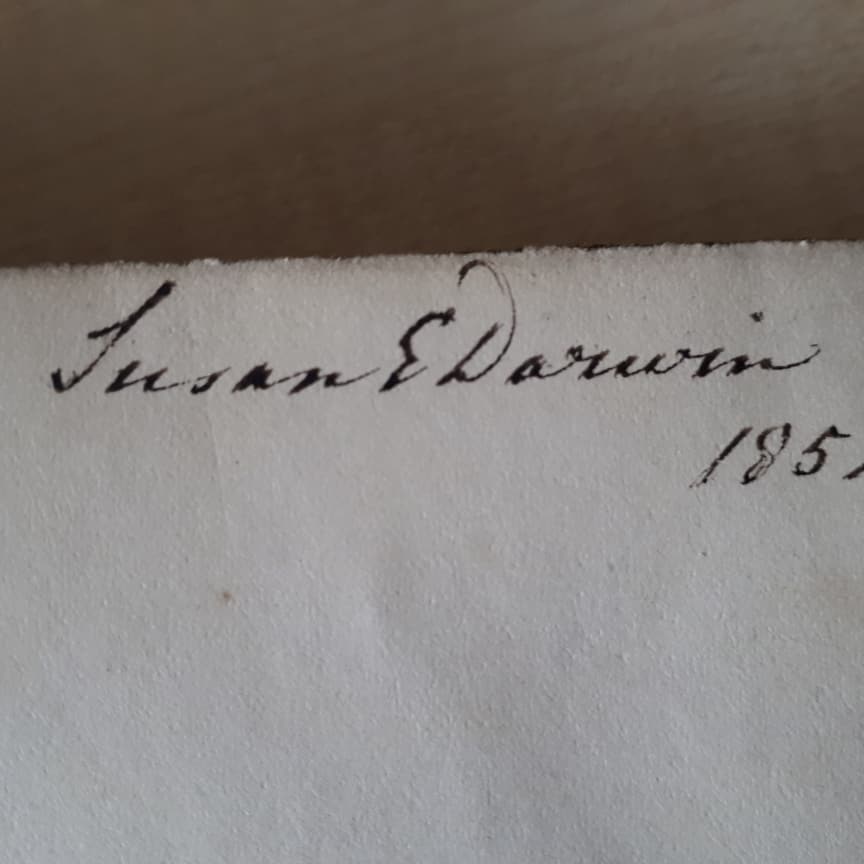 Continuing with my project of cataloguing all the books in William’s study I reach four undistinguished looking brown volumes by Lord Henry Cockburn. Inside both covers of a two volume life of Lord Jeffrey (1773-1850, Edinburgh judge and literary critic, co-founder of The Edinburgh Review), my eye is caught by a very clear inscription Susan E Darwin, 1852. As well as these signatures, in the top left-hand corner of the front board, a tiny little label from a bookseller in Shrewsbury. I knew that the Darwin family lived in Shrewsbury; there is a statue of Charles Darwin outside Shrewsbury library. I also knew that the Darwins were distantly related to the Gaskells. Could this Susan E be related to the more famous Charles?

I soon discover that Charles had one brother and four sisters, one of whom was called Susan Elizabeth (1803-1866). One of my co-volunteers Ann Hodges, quickly helps to track down some genealogical and census records for her.

Died 3 October 1866, Shrewsbury – and buried there in St Chad’s churchyard.

1841:- Living with father and sister Emily Catherine.  Both she and sister unmarried.

1851:- An ‘independent lady’, head of household consisting of Emily and various servants at Frankwell, Shrewsbury.

1861:- Still at Frankwell, The Mount, still unmarried and a ‘Lady’.  Her niece and nephew, Mary and Charles Parker, children of Susan’s older sister, Marianne, are living with her along with lots of servants.

Next, we needed to verify that “our” Susan’s signature matched that of Charles’s sister. 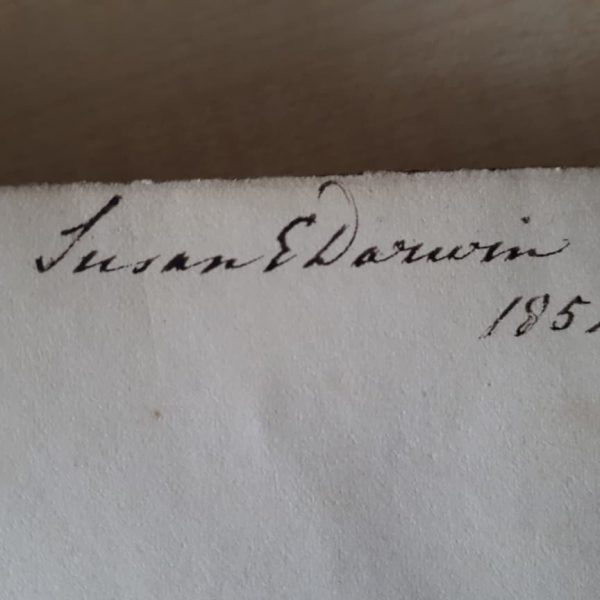 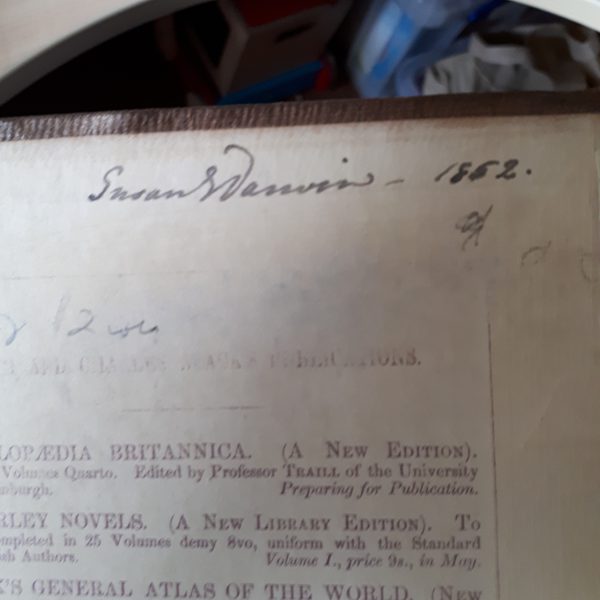 Cambridge University holds a major archive of Darwin Correspondence which finds and researches letters written by and to Charles Darwin. A search reveals that the archive holds several letters from and about Susan. Sally and I send off an enquiry to the archivist along with photographs of the signatures in our books.

The next day we receive a very comprehensive reply from Rosemary Clarkson, Research Assistant and archivist, confirming that it is highly likely that the signatures we have match those on letters held in the Darwin archive

“It looks as if the owner of the volumes was Charles Darwin’s sister, Susan Elizabeth Darwin.

The name was not common in the mid nineteenth century. A quick look for ‘Susan Darwin’ in the 1851 census produced only four hits: a Susanna Darwin in Melford, Suffolk, who is really Susanna Durwin; another in Boston, Lincs., aged 17; Millicent Susan Darwin in Sydnope, Derbyshire, aged 18, who is a half-cousin, and Susan E. Darwin, Charles Darwin’s sister, in Shrewsbury.”

“There aren’t very many letters from her in the DAR archive, and most of those were sent to her brother on the Beagle, so the signatures are rather cramped to fit as much writing as possible onto the sheet of paper.”

She sends us a photograph of Susan’s signature from one of her letters, which we aren’t able to reproduce here for copyright reasons, but they do indeed seem to match.

It was a lucky day for us when he stuck those tiny labels inside, as they help us to verify the link between Susan Darwin and Shrewsbury.

As well as the excitement of finding signatures from someone so well-connected, there is the added interest of the Darwin family connection to the Gaskells. Charles and Emma Darwin were cousins and both were grandchildren of Josiah Wedgwood. Darwin’s mother was Susannah Wedgwood who married Dr Robert Darwin.  Elizabeth Gaskell’s mother was Elizabeth Holland. She was the sister of Swinton Holland who married Nancy Willett.  She, Nancy Willett, was a daughter of Catherine Wedgwood, sister of Josiah.  So, Elizabeth Gaskell and Charles Darwin were both related to the Wedgwood family: Darwin closely, Elizabeth Gaskell more remotely.

These family connections meant that Elizabeth was able to visit various members of the Darwin family and she knew and admired Charles. In 1851 we know from a letter dated 13th July to her daughter Marianne, that she was at a gathering at a Mrs Wedgwood’s “Mr Darwin his two sisters all the children….made a great large party and very pleasant it was”. I wonder if one of these sisters was Susan Elizabeth?

The volumes that began this investigation, The Life of Lord Jeffrey, are not listed in the record of the Sale of Books from the house in 1914 and we do not know how they have come to be in our study. In an interesting further twist, the Darwin Correspondence archivist has told us that Charles Darwin himself finished reading this “Life” in May 1853 and recorded it in his reading notebook as “very good”.

Apparently no copies exist in the library of Charles Darwin’s books at Cambridge or in his home, Down House. This has led us to speculate whether or not he may have borrowed these volumes from his sister. Wouldn’t it  be exciting for us if we could find further evidence that these volumes were read by Charles Darwin himself?

Sadly the marginalia (see below) we discovered in volume 1 does not match Darwin’s hand so unless new letters come to light confirming that Charles borrowed his sister’s copy of the books we will just have to go with the fact that there is a  ‘reasonable possibility’ that he did. 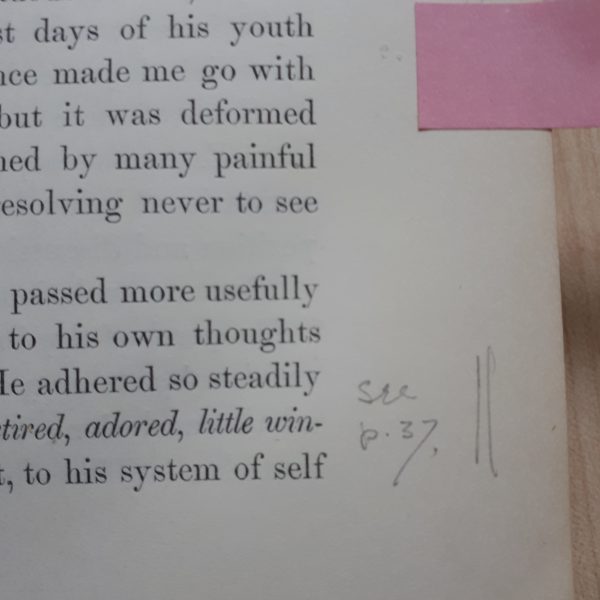 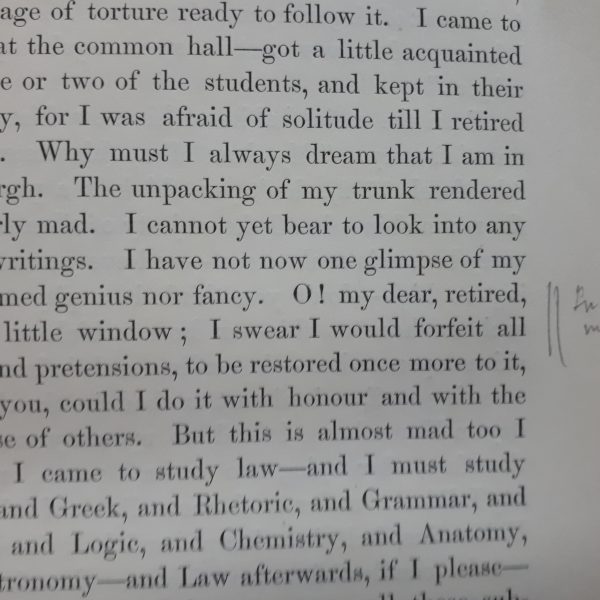