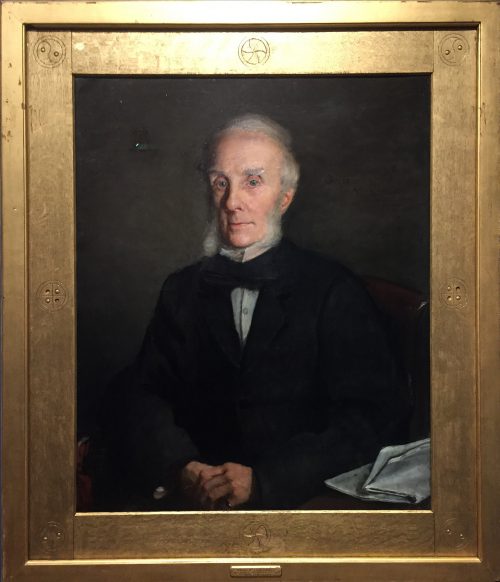 A visit to the archive at the Manchester Lit & Phil

As a member of The Manchester Literary and Philosophical Society, I had been asked to write a piece on our illustrious past member Ernest Rutherford. So there I was at Church House going through the Society’s files when my magpie brain suddenly thought about William Gaskell, who was also a member. Having found the information on Rutherford I looked up William and discovered that he had been a member from 1840 to 1884 and Vice President 1869 – 1876 and 1882 -1883. I also found the following in the Procedings Vol 1 1857-1860:

‘The Rev. W Gaskell read an extract from a letter of Rev Thomas Belsham (dated Hackney, August 16th 1805) containing an account of a visit which he had just paid to the Duke of Grafton, in which the following passage occurs, and Mr Gaskell wished to know whether any Member of the Society could confirm the statement made in it.

“ Admiral Cosby told me one circumstance which was curious. When he was Commander –in-Chief in the Mediterranean, during the last war, at the time that we were in possession of Corsica, and when Sir Gilbert Elliot was Governor-General of the island, General Paoli introduced Bonaparte, then a young man, to the Governor and to the Admiral, as a friend of his who would be glad to be employed in the service of England; but these wise men, not having Lavater’s skill in physiognomy, rejected the proposal, which obliged Bonaparte to offer his services to the French, and this was the rise of Bonaparte’s fortune. I had often heard that Bonaparte had offered his services to the English and been rejected, but I hardly gave credit to till I learned it from Admiral Cosby himself.”

Mr Hopkins and Mr Roberts said that in their boyhood, they had often heard a similar statement made, but were not aware on what authority it rested.’

I thought this was an interesting question and I loved ‘not having Lavater’s skill in physiognomy’! Johann Kaspar Lavater (1741- 1801), I discovered, was a Swiss writer, Protestant pastor and founder of physiognomics. ‘His belief in the interaction of mind and body led him to seek influences of the spirit on the features.’ Well I expect there were a few wrong decisions made if they were based on that philosophy!