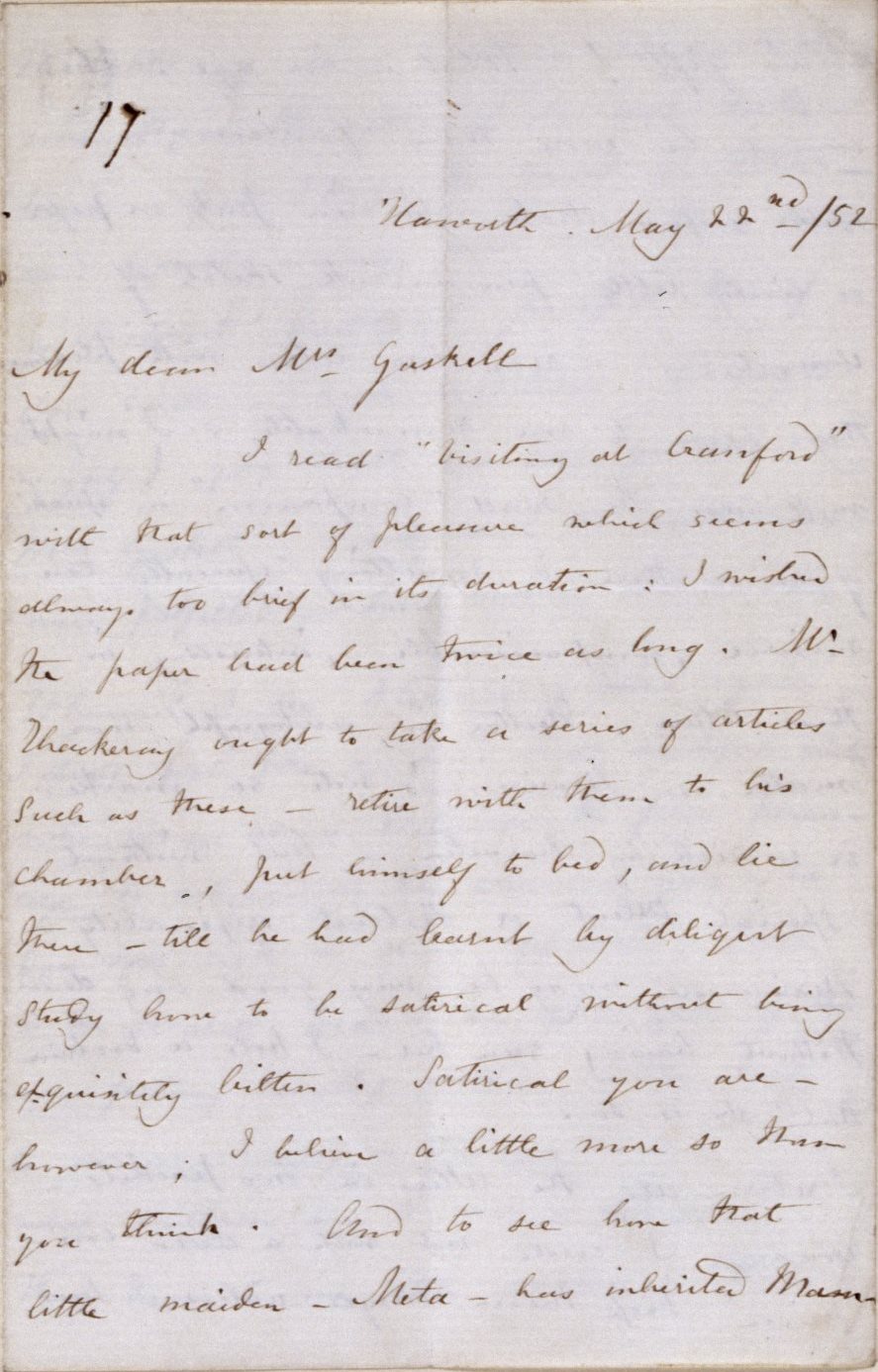 A Visit to the Parsonage

On 15 July 2022 I visited the Bronte Parsonage Museum in Haworth. The visit had been planned back in June after a visit from Anne Spiers, a volunteer at the Parsonage, to Elizabeth Gaskell’s House. I was particularly excited to be given access to the library which held a wealth of Bronte material, some relating to Elizabeth. I know the friendship between Charlotte and Elizabeth is popular with our visitors at Elizabeth Gaskell’s House, so I thought it would be good to hear the other side of the story!

On entering the library I was met by wall after wall of bookcases packed with Bronte material, days and days of happy reading, sadly I only had one afternoon.  Sarah, one of the archivists had extracted a very special edition of Elizabeth’s The Life of Charlotte Bronte. While this was an original first edition it had added to it six original manuscript letters, most to Ellen Nussey, but one was written to the Examiner in 1857by William Dearden of Halifax, a friend of Branwell Bronte.  Dearden is scathing in his criticism of Elizabeth’s presentation of Patrick and Branwell Bronte, setting out quite clearly the task of a biographer which he describes as ‘sacred’ and which in his opinion Elizabeth had not successfully accomplished:

No one should undertake it who does not feel sure that he possesses not only the ability to furnish, but the judgement to select, the best authentic information respecting personages, living or dead,…If he lack these essentials …-consequences often ensue, mortifying to the unlucky writer, derogatory to the character of the dead, and painfully afflicting to the feelings of the living.

So, lack of judgement and inability to select appropriate information are the main criticisms levelled at Elizabeth here and she was certainly mortified by the backlash that followed the release of her biography.

However in her defence, some information was restricted as these manuscript letters show.  Charlotte’s letters to Ellen have had many names redacted to protect people’s identity. Even before Elizabeth went to collect 300 letters from Ellen, the collection had been carefully scrutinised and many, Juliet Barker quotes 200, were kept back. This was a form of information control that Elizabeth had no control over, although that’s not to say she was innocent of careful selection and marshalling of information herself.

In the library I also met a young Parisian who was working on a graphic novel about Anne Bronte.   I was lucky enough to be allowed to photograph one of her sketches and look forward to seeing the published text.  Her idea is to introduce colour into the life of the Bronte family. She believes that their life was not as dull as it is often portrayed and she showed us some very vibrant examples of the artwork for her novel.

She also translated one of Charlotte’s letters that had been tipped into this wonderful book which the Museum is quite rightly proud to own. It became clear that Charlotte’s expression was at times quite quirky and hard to translate into clear modern English, it was also noted that there were a number of mistakes.  It was good to see that one of the great icons of English literature was human and fallible. The Honresfield Collection will be arriving at the Parsonage sometime in the autumn when hopefully more treasures will be available to view.

However, in the meantime a few items from the collection have made their way into the Museum. At present there is a wonderful exhibition of Charlotte’s costume. I found out that after her success as an author, Charlotte felt the need to reinvent her image. It seems that people viewed her as a rather drab individual and this needed to change as she would need to visit London and mix in a more cosmopolitan society.   There is a beautiful steel blue dress and some colourful shawls, one in particular caught my eye-it was white with self-coloured embroidery.  It is not clear whether these shawls belonged to Charlotte, Anne or Emily, so maybe we need to re-evaluate our view of all three  of the Bronte sisters.

At Elizabeth Gaskell’s House we have Elizabeth’s veil on display in the Morning Room so it was lovely to see Charlotte’s wedding bonnet on display at the Parsonage.

I spent a thoroughly enjoyable day meeting the volunteers and chatting about Charlotte and Elizabeth. I do hope that through the passion of the staff and volunteers at these two literary houses we can keep that friendship alive.

« NEW Gaskell Garden Trail
Day in the Life of a Volunteer »