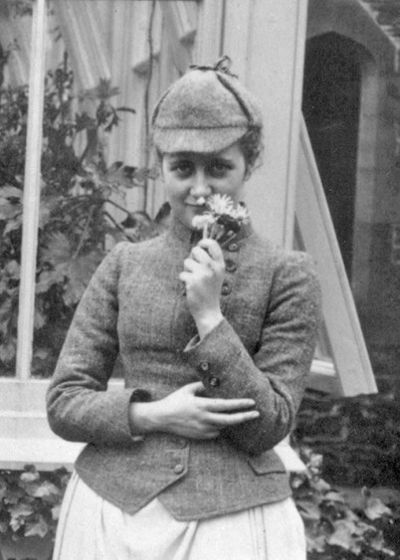 I hope you’ll allow me to claim Beatrix Potter as, in part, a Manchester writer! If she lived for the first forty years of her life in London, when she stayed with her grandparents she often came to Greater Manchester, and she spent many holidays in the Lake District. That’s good enough for me!

Her paternal grandfather, Edmund Potter was brought up within a deeply committed Unitarian family. Born in 1802, he was baptised at Cross Street Chapel. His wife, Jessy Crompton was also a committed Unitarian, and their social life as a young married couple revolved around the Unitarian community at Cross Street Chapel in Manchester. where a young William Gaskell was the Junior Minister. The Potters were rich industrialists. By 1862, Edmund Potter’s calico printing firm was the biggest in the world, producing more than sixteen million yards of calico each year. Beatrix’s father, Rupert, who was their second son, attended Manchester College when he was sixteen where William Gaskell was the Professor of English History and Literature. Rupert already knew him well from his attendance at Cross Street Chapel.

Her maternal grandparents , the Leeches, shared with the Potters a deep commitment to Unitarianism and education, as well as to the promotion of science and art in Manchester. By nineteenth century standards they were both enlightened employers providing educational opportunities for their workers. The Leeches were as equally financially successful as the Potters – indeed John Leech was known around the city as Ready Money Jack!

For the whole of the 1870s, Beatrix spent her summer holidays at Dalguise in Scotland with her family, and their party included many friends of her father who enjoyed the Scottish countryside. In addition to John Millais, these friends included William Gaskell. . For Christmas 1874, when she was eight, Beatrix knitted William Gaskell a scarf as a present and he sent her a charming note of thanks: ‘Big as I am I know I could not have done one tenth as well. Everytime I put it round my neck – which during this weather will be every day – I shall be sure to think of you.’

Beatrix was eighteen when William Gaskell died in 1884, and in her journal on June 12 she records her deep affection for him: ‘Dear old man, he has had a very peaceful end. If ever any one led a blameless peaceful life, it was he. Another old friend has gone to rest. How few are left. There has always been a deep child-like affection between him and me. The memory of it is one of the past lights bound up with the old home.’

She recalls the minister in his grey coat and old felt hat sitting in the warm sunshine on the doorstep there and herself as a little girl ‘in a print frock and striped stockings’ bounding to his side ‘with a bunch of meadowsweet. He just says ‘thank you dear’, and puts his arm around her. the bees hum round the flowers, the air is laden with the smell of roses. Sandy lies in his accustomed place against the doorstop… Shall I really never see him again? ( ) but she is gone with almost every other, home is gone for me, the little girl does not bound about now, and live in fairyland, and occasionally wonder in a curious, carefree manner, as of something not concerning her nature, what life means, and whether she shall ever feel sorrow. It is all gone, and he is resting quietly with our fathers. I have begun the dark journey of life. Will it go as darkly as it has begun? Oh that I might go through life as blamelessly as he!’ (p58)

I’m not sure William Gaskell has ever had a more poignant tribute. His gentle kindness and sensitivity towards the child Beatrix is very moving and gives a wonderful sense of the father he was to his own girls. Peter Rabbit and Benjamin Bunny are in the future but Beatrix Potter will carry influences from Manchester with her and into their creation.