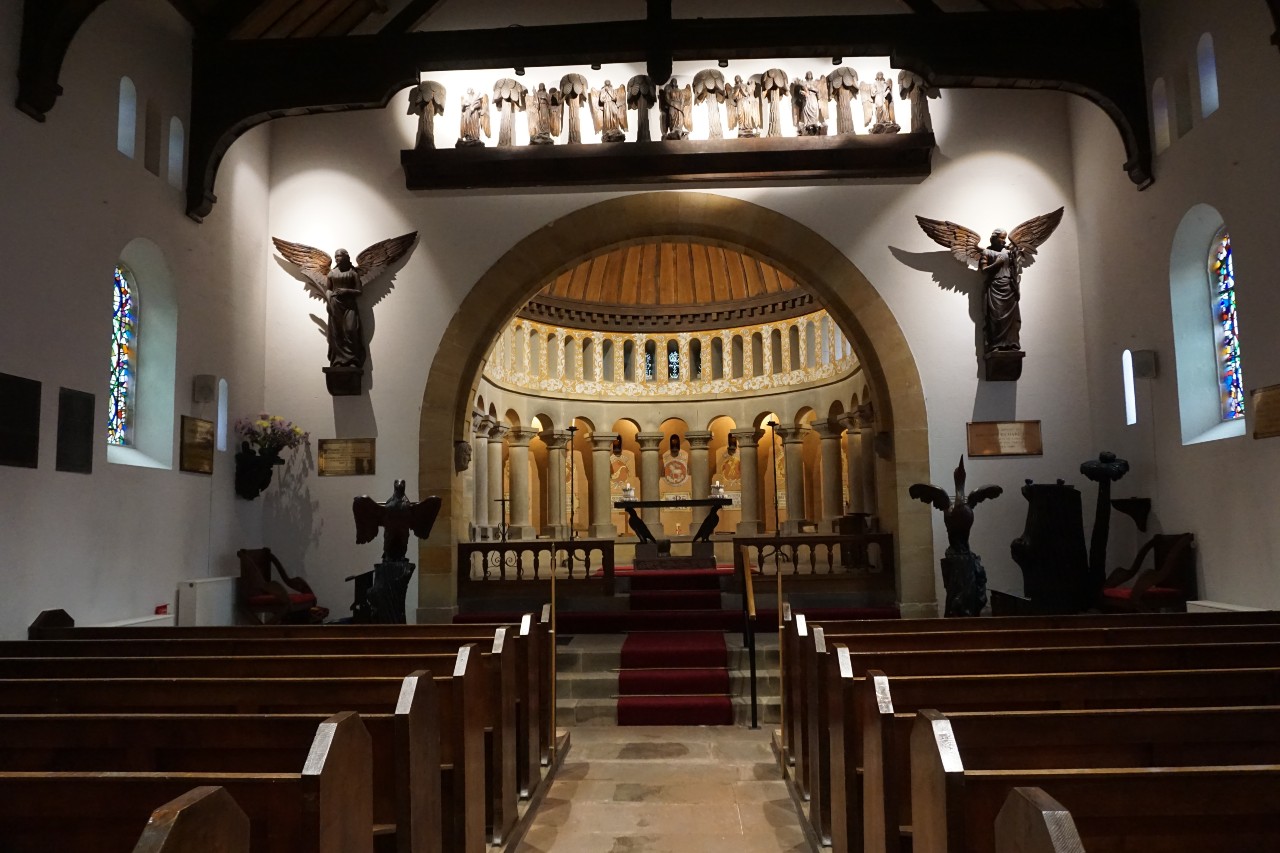 Sarah Losh and the church at Wreay

On a week’s holiday in Northern Cumbria recently, I was able to visit the little village of Wreay  (pronounced to rhyme with near) just south of Carlisle and within earshot of the M6. Sitting at the heart of a tiny village is a most unusual church which looks more suited to Tuscan hillsides, with its rounded apse and rectangular nave. It squats between a small village green and a school surrounded by a green oasis containing only trees and a few rough tombstones enclosed by a wall.

St Mary’s Church as well as other buildings in the village, are the creation of an extraordinary woman called Sarah Losh, who built it as a memorial to her beloved sister Katherine. Paid for out of her own pocket it includes ornaments and features worked by herself as well as by local craftsmen.

I was delighted to discover that there is a biography of Sarah Losh by Jenny Uglow , also  biographer of  Elizabeth Gaskell, titled The Pinecone. What’s more the Losh family was known to Elizabeth. So, a beautiful church with an intriguing history and a connection to Elizabeth Gaskell. Heaven indeed!

In the18th and 19th centuries, the Losh’s were a substantial family in the area of Cumberland near Carlisle, with interests in alkali manufacture and coal mines in Newcastle.  The family was well connected and knew such prominent Victorians as William Wordsworth and George Stephenson.

James Losh, a Newcastle lawyer and uncle of Sarah, was a Unitarian.  He was a close friend of the Newcastle Unitarian minister William Turner, the relative whom Elizabeth lived with for some time as a young woman before her marriage .Jenny Uglow describes William Turner as a pioneering figure who ‘looked to new men of power, the merchant the manufacturer, the engineer, the ship wright and the navigator‘ One of those new men was James Losh, an organiser of the anti-slavery campaign and passionate supporter of parliamentary reform.  At James’s funeral in 1833, William Turner, then 91 said ‘Mr Losh was emphatically the friend of the poor…no doubt that many persons present had been indebted to him for their education’. He had helped William Turner establish Sunday Schools for adults as well as a Mechanics Institute. He sounds not unlike William Gaskell, in that he was involved with many committees in Newcastle, such as The Literary and Philosophical Society, The Antiquarian Society and the Horticultural Society.

Elizabeth met James at William Turner’s home and we know from Jenny Uglow that she also knew ‘the forceful Miss Losh who inherited her father’s ironworks and ran them extremely successfully until 1847‘.

It was while staying at the Rev William Turner’s that a bust of Elizabeth was sculpted by the artist Dunbar which resulted in much teasing ‘Mr Losh told my cousins in town that he thought my bust so very like Napoleon- do you?’ she wrote to her friend Harriet Carr.   Uglow notes that Dunbar also sculpted a bust of Miss Losh of Woodside (the Losh family home near Wreay).

Sarah Losh and her sister Katherine lived all their lives at Wreay, both choosing to remain unmarried. They inherited wealth from their father in 1814, were land owning and thus landlord to many tenants, as well as maintaining interests in mines in the North East. They were not short of money.  Like Elizabeth Gaskell and her daughters, they were well travelled in Europe as well as this country and were influenced by ideas from the art and architecture of new places.

Heartbroken by the death of her younger sister aged 46 in 1835, Sarah determined to build her a lasting memorial. The existing church in Wreay was in a dilapidated state and Sarah applied to the Bishop of Carlisle for permission to rebuild a church at her own expense, on condition that she ‘should be left unrestricted as to the mode of building it’.

The church was built between 1840 and 1843 using local labour and built entirely to Sarah’s design and ideas. In form it is based on the form of a Roman basilica as used by very early Christians and of a design which Sarah would have seen in Italy.  She wanted the structure to be simple and decorated it with symbols that looked back to earlier times. Carvings around the doorway, on the font and around the apse, draw on more pre-Christian, pagan and personal references.  It is full of carvings based on nature, with images of insects, flowers fossils and pinecones, a symbol of renewal. The gargoyles are turtles and dragons. The windows are carved with ammonites, flowers and butterflies. The pulpit is a hollow tree trunk dug from a bog. The altar candlesticks are in the shape of lotus flowers.

While it is a church affiliated to the Church of England, in its natural symbolism it seems more closely in tune with more free-thinking Unitarianism. Sarah will have been influenced by her Uncle James in this.   Architecturally it is seen as an important precursor of the Arts and Crafts movement. When Nikolaus Pevsner, the architectural historian, visited  Wreay in 1967 he was astonished at the originality of the church, saying ‘Miss Losh was quite free in her interpretation and quite original’ and went on ‘its symbolic carvings have no parallel at all. In fact one might make the mistake of dating St Mary as one of the examples of Early Christian or Byzantine revival which took place about 1900 and its carvings as Arts and Crafts. The latter is indeed almost unavoidable’  It anticipates many of the ideas of Ruskin and William Morris which had yet to be expressed and which were unique in the 1840s.

As well as building a beautiful church, Sarah influenced the village in other lasting ways. She diverted the river, built a Dame School for girls, moved the graveyard (hence no gravestones beside the church apart from her own and those of her close family)  and built a sexton’s cottage, built a simple chapel of rest (now housing a small museum about the family) and a new school house. She died in 1853 and was then largely forgotten outside the village for many years.

Today the church doesn’t look exactly as it did in 1842. Pews have replaced high backed chairs (stolen) some memorials have appeared on walls (not wanted by Sarah) as have carpets and an organ. Restoration was carried out in 2006, as the roof was leaking.  But the essence of the church remains and it is a haven of peace and beauty.

I was delighted to discover that the architect of this beautiful place had a connection with Elizabeth Gaskell and would love to know more. Did Elizabeth and / or William Gaskell ever visit the church at Wreay? It’s not impossible.  Did Sarah Losh ever visit the Gaskells in Manchester? If anyone knows any more I’d love to hear.

For more information about the Losh family and the building of the Church at Wreay read: The Pinecone. The Story of Sarah Losh, Romantic heroine, architect and visionary by Jenny Uglow. Faber 2012.