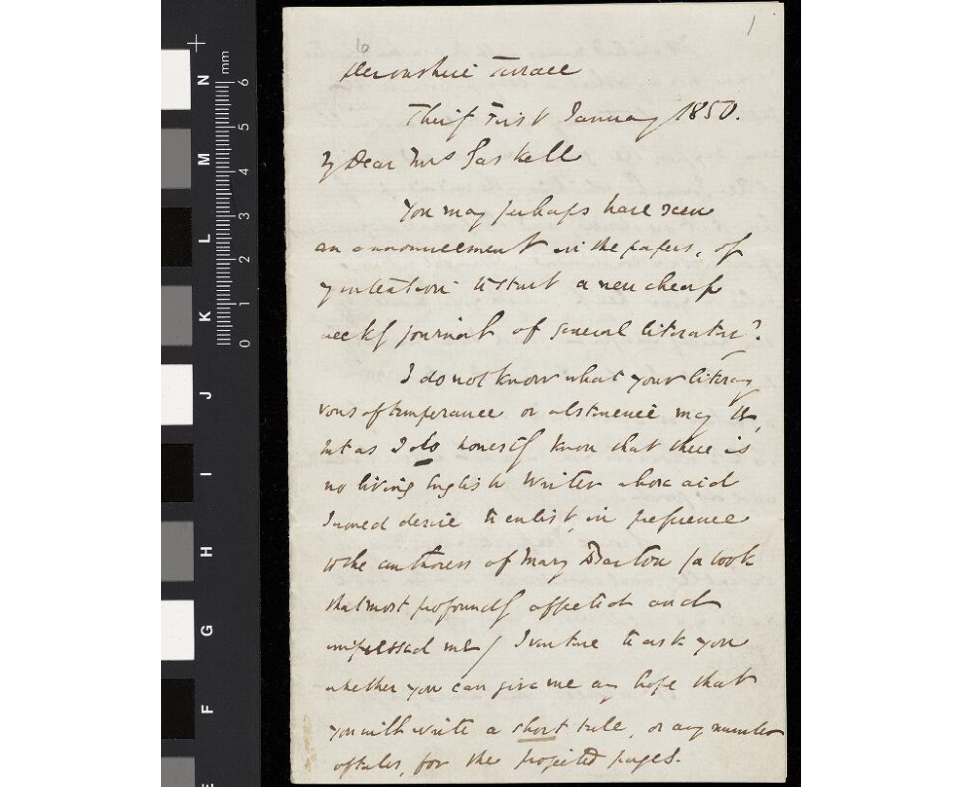 Thanks to popular demand, and time afforded to staff during lockdown, the John Rylands Library (owned and operated by the University of Manchester) has just announced that they have created a new image viewer that makes their Elizabeth Gaskell collection of letters and manuscripts more accessible to the public.

Those who saw Channel 4s Britain’s Most Historic Towns on 18 December 2020 may remember that presenter Dr Alice Roberts showed viewers a letter written to Elizabeth from Charles Dicken praising her first novel Mary Barton. (if not watch the clip below). This letter forms part of the collection held by the John Rylands and was brought to the house where Elizabeth lived and wrote, from 1850-1865, specifically for filming. It gives us a glimpse of how much of an impact Elizabeth’s first novel made on the literati of the time and the esteem she was held in by her fellow writers.

The letter is just one of many between Charles Dickens and Elizabeth that is held in the collection at the John Rylands Library and which will now be made available via this new image viewer.

Jessica Smith, Creative Arts Archivist  at The John Rylands Library explains more; “In the first months of lockdown 1 in 2020, a call went out in Curatorial Practices for suggestions of digitised material which could be transferred to our new image viewer, Manchester Digital Collections (MDC). My first thought was a collection of letters from Charles Dickens to Elizabeth Gaskell. I receive numerous enquiries about these letters, so much so that I’d requested their digitisation the previous year to facilitate access to them.

They’re predominantly about Dickens’ role as Gaskell’s editor, and the work that she published in his weekly magazine, Household Words. Gaskell was a regular contributor from 1850, and Dickens was the first to publish her novels North and South and Cranford in the magazine in serial form. “

Manchester digital collections are produced in collaboration by curators, the Imaging team, the Digital Technologies team, and the Collection Management team at the University of Manchester and the John Rylands Library.

You can access the digital viewer via this link – https://www.digitalcollections.manchester.ac.uk/collections/gaskelldickens/1