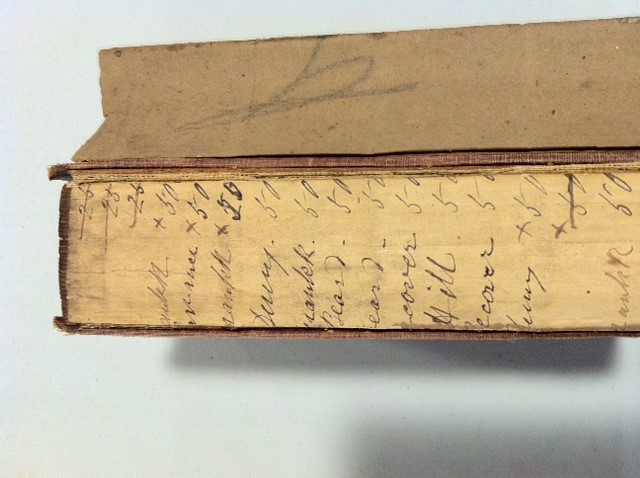 Last Monday, 17th Feb, a few volunteers who have been involved in restoring and repairing the house’s books, met to decide which tasks we should tackle next. During the morning we found a number of books where the spine was damaged so we were piling them up for repair when we noticed that, in two books where the spine had come adrift from one of the backing boards, there was old used paper underneath (see photos below). One was a volume of Wordsworth with paper printed in French attached to it and the other, Bacon’s Essays and Historical Works, had a more intriguing piece which was handwritten. This latter puzzled us for ages as it is difficult to read but we think it maybe a list of names with possibly wages next to them. Come and see it for yourself as we are open to other interpretations.

With further research I found this on the internet. It is taken from a post written by Venessa Haight Smith,head of Preservation Services at the Smithsonian Libraries:

‘When repairing older books, the Smithsonian Libraries conservators occasionally uncover evidence of recycling by the original bookbinders. Paper from damaged and discarded volumes was frequently used when binding new books……….While the use of binding waste has varied throughout the centuries we most frequently see it used to line spines. These paper linings were applied to the spine once the textblock was sewn. By the 19th century , most binding waste included parts of newspapers, catalog(ue)s and magazines……………..Waste used as spine linings is only visible when books are damaged in a way that exposes what lies underneath the covering. These scraps can provide interesting clues to provenance, location and dates.’

I think our copy of Bacon’s Essays and Historical works is especially interesting as the waste used is not printed but handwritten. And why is the waste used on the Wordsworth printed in French? Answers on a postcard please!

How interesting simple tasks can become! I’m very glad I decided to help with conserving our books.

« Volunteering as a student
Launch to recreate Elizabeth’s Bedroom »