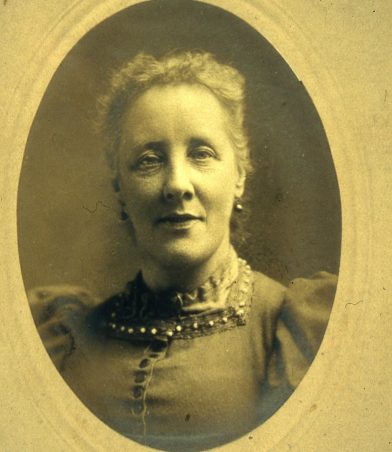 witty and wild and clever and droll, the pet of the house

Julia Bradford Gaskell was born in September 1846, the year after her brother William died and while the family was still living at 121, Upper Rumford Street. She was four when their new life began at 42 (now 84) Plymouth Grove.

Elizabeth’s youngest daughter was named after Julia Emma Bradford, formerly Taylor, the wife of an American merchant who lived for a while at 6 Cliff Point in Higher Broughton, Salford; then a very wealthy district of what is now the city of Salford – James Joule moved to 5 Cliff Point in 1868. Elizabeth and Julia Bradford became friends. They met at the Bradfords’ christening party in 1838 and there are many letters describing Elizabeth’s stays at the Bradfords’ home between 1838 and early 1841. The Bradfords moved from Manchester to Boston before the summer of 1845 when Elizabeth speaks of her friend in the past tense: “as dear Julia Bradford used to say”. In 1846, the year Julia Gaskell was born, her namesake reviewed Mary Barton favourably in a Boston newspaper.

So, what was the youngest member of the Gaskell family like? Establishing a detailed character for Julia in her early years is more problematic than it is for her sisters as less is written about her. She is mentioned regularly, but briefly, yet from the information provided it appears that she did not like being away from her mother. After Elizabeth’s visit to Capesthorne and Bollington early in 1850, Elizabeth explains that on her return the three- year-old “(baby as we call her,) took fast hold of my gown and stuck fast to me wherever I went”. Even at sixteen, Julia is unhappy “doleful and not feeling well” when she was sent to Knutsford, to Aunt Mary and separated from the family.  There was a twelve-year gap between Julia and Marianne, nine between her and Meta, so their nearness in age made Flossy and Julia very close throughout their childhood. Flossy was very protective of her younger sister and Elizabeth tells Eliza Fox how Flossy was “running about in the middle of the night because she thought Julia was ill”.

Julia was a bright and witty child although she seems to have had less obvious talents in either art or music than Marianne and Meta possessed. Her painting of the Wetterhorn exhibited by the piano in the Drawing room at Elizabeth Gaskell’s House is not so well executed as those of her older sister, Meta, displayed on the opposite side of the same room. The painting was probably done on one of her journeys to Switzerland as she was an energetic walker and mountaineer and was friendly with Edward Whymper, the first man to climb the Matterhorn.

While Julia may not have inherited her sister’s talents for producing music, she was an enthusiastic listener. In a letter, to her Knutsford friend, Isabella Green, dated March 1873 she writes “I felt almost stunned with the music, and as if everyday life, of catching trains etc. were quite forgotten”. In the same letter she remarks how much she would prefer a life in music and mathematics to “everyday duties such as finding kitchen maids.”

One aspect of Julia’s early life that stands out from her sisters is her relationship with Charlotte Brontë. Julia was a very sociable girl. Elizabeth calls her a “perpetual singer and chatter box”, and it is probably this aspect of her character that endeared her to Charlotte who was painfully shy. Charlotte found it difficult to socialise and, to her, children were as a different species. Charlotte writes to Elizabeth: “to what children am I not a stranger? They seem little wonders; their talk, their ways are all a matter of half-admiring speculation”. But Julia made a lasting impression during Charlotte’s stay in Manchester in 1853 by presenting Miss Brontë with a wildflower, which Charlotte subsequently pressed and treasured. In return Charlotte sent a book to Julia, aptly entitled New Friends, or a Fortnight at the Rectory and inscribed “To Julia with my love CB“. Elizabeth was very proud of the attachment between her daughter and her friend, so she added a note in her own hand to the inscription: “This book was given to Julia Gaskell by Charlotte Brontë, who lost her heart to the child”.

Charlotte Brontë foretold a bright future for Elizabeth’s youngest daughter: “I think hers is a fine little nature, frank and of genuine promise…I believe in Julia’s future; I like what speaks in her movement, and what is written in her face”. But did the youngest Gaskell daughter live up to Charlotte’s prediction?

Well, she never married and while there is evidence that all three of Elizabeth’s older daughters had romantic attachments, two leading to marriage, there is no mention of Julia attracting any male attention, although there is evidence that she did attend balls. This lack of information could just be a matter of timing; Elizabeth’s letters ceased in 1865 with her death, two months after Julia’s nineteenth birthday. Julia remained at Plymouth Grove, with her sister Meta, until her death in 1908. The two Miss Gaskells were actively involved in cultural and educational activities. Julia, like her sister, was a subscriber to the Royal College of Music in Manchester and was involved with the Manchester Art Museum and the Manchester and Salford Sick Poor Private Nursing Institution. She was also on the committee of the Manchester and Salford Women’s Trade Council and was joined there in 1902 by Christabel Pankhurst.

The year after her death in 1908, Meta Gaskell founded a nursing home on Swinton Grove in memory of her sister. When the home was demolished and NHS Gaskell House built on the land behind 84 Plymouth Grove, the dedication plaque was saved. It is now displayed outside the Servants’ Hall in Elizabeth Gaskell’s House.