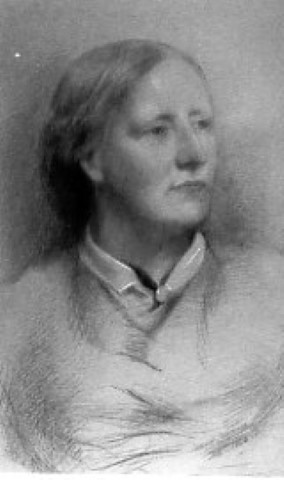 In February 1855, Elizabeth Gaskell was in Paris with Meta, and staying with her friend Mary Mohl. It wasn’t only a social visit – she writes to Marianne ‘Monday I had to go to Mme Scheffer’s to see her about business (;) back to meet a M. Hachette on the same business.’

So who was M. Hachette and what was the business Gaskell was conducting with him? Louis Hachette was the founder of a famous Parisian publishing firm which published many English novels in translation. Between 1854 and 1868, these included all of Gaskell’s novels and stories, and it seems likely she was meeting him to discuss these translations of her books. We know from a letter she wrote to him on 22 March 1855, that Gaskell was concerned to monitor and influence the quality of her translated work: ‘ I do not know if ‘Cranford’ will be one of my works which you will select for translation but if it were, I should be very glad, as far as I am concerned, if you and Mme Belloc could come to any agreement, as I fancy she is well acquainted with the delicacies of the English language.’

What is very interesting is a letter she writes to Louis Hachette after their meeting which reads as a response to his request for suggestions for other English writers he could publish. Gaskell writes ‘I have written out what I thought you would like to know about the novels by living writers.’ Her suggestions illuminate the range of her reading, detail the contemporary writers she read and rated, and open a window into her reading life.

So who does she recommend? It’s no surprise that Charlotte Bronte gets the top spot on her list: ‘Jane Eyre (a very remarkable book) ; Shirley ( not so good, but better than the best of most other authors) ; Villette – this is considered fully equal to ‘Jane Eyre’ as to talent, but the story is not so interesting.’

After recommending Wuthering Heights and dismissing the work of Anne Bronte ( Charlotte Bronte’s 2 sisters wrote novels, but only one of them succeeded), the next writer on on her list is a Mrs Marsh. ‘The lady has written about thirty novels, one or two of which are very good; three or four tolerable, and the rest forgotten as soon as read.’ The two books by the prolific Anne Marsh Caldwell which Gaskell recommends are The Two Old Men’s Tales published in 1834 and Emilia Windham published twelve years later. Is your appetite whetted to search them out? I’m not sure mine is!

Next up is Catherine Gore. Gaskell’s description of her work reminds me of a nineteenth century Jilly Cooper – a guilty pleasure! ‘You are probably acquainted with the writings of Mrs Gore, which are about as numerous as those of Mrs Marsh, and are of the class called in England ‘Fashionable novels.’ They have very little plot in them, their principal interest (for those who read them,) consisting in a lively, spirited epigrammatic description of the manner of lords and ladies. The best novel Mrs Gore has written is called Mrs Armytage.’

She rates Charles Reade’s Christie Johnstone – ‘a novel published about two years ago, which excited great attention, and the highest praise, and which was, I think, worth all Mrs Gore’s, and Mrs Marsh’s novels put together. I should be thankful if I could write with the glorious power of that book, with all its many faults.

Also making the cut are the novels of Geraldine Jewsbury, Margaret Oliphant, Dinah Mulock and Margaret Maitland – again writers who are probably less familiar to us today.

Coming out of left field is ‘a very brilliant novel, called Lady Lee’s Widowhood, The author is Major Hamley, who has distinguished himself in the Crimea, and is said to be writing a history of the campaign. His novel is very brilliant and clever.’ Has anyone read this one hit wonder? Do let us know!

Her final recommendation is Wilkie Collins – ‘a young writer, a friend of Mr Dickens, who is likely to work himself into a good place as a writer of fiction. He takes great pains, and devotes himself to novel-writing as to a profession. His style is considered very good. I do not admire his books myself, but many good judges do‘ She mentions ‘Antonina – a romance of the later Roman Empire, Basil – detestable, and Hide and Seek – reckoned very good.‘ Of course, Wilkie Collins best known and critically acclaimed novels The Moonstone and The Woman in White are in the future when Gaskell is writing.

Will I be following the reading list? It’s the detestable Basil that has piqued my interest! What about you?