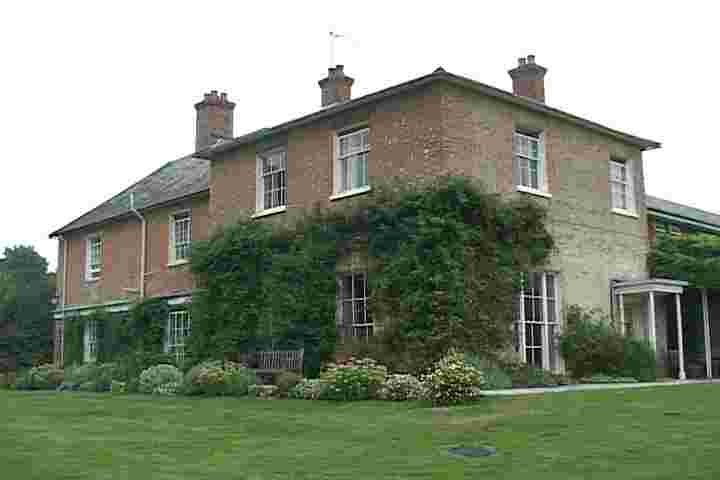 Posted
11th May 2020
in blog, blogsNnews, Gaskell House Blogs, other

…in a very pretty garden

Historic England describes The Lawn as an early nineteenth-century, two storey building. In 1829 it was occupied by William Barlow who owned several properties in Holybourne. Ten years later, William Barlow was dead, and in 1852 The Lawn, a freehold property numbered 119, London Road, became the residence of George Walpole White. It was from George White that Elizabeth Gaskell bought the house in 1865.

Elizabeth describes it as “large- (not quite so large as this [Plymouth Grove] in a very pretty garden (kitchen flower- garden & paddock between 3 and 4 acres).” Mrs Chadwick provides a more detailed description in her biography of Elizabeth Gaskell Haunts Homes and Stories (1910).

It is a large, detached house, standing at some little distance from the main road, well shaded with thick fir trees, and with a beautiful garden and a little brook a tributary of the Wey meandering through the grounds. The stream is crossed by a pretty wooden bridge, connecting the lawn and flower-garden with the orchard beyond….

The house is long and narrow and has been built at two different periods. There is a long, glass-covered porch, forming a conservatory, which is the main entrance. The oak-panelled hall extends the whole length of the building, from the front door to the door opening on to the lawn. On the ground floor, to the right, is a large drawing-room, with French windows on two sides, commanding a beautiful view of the grounds; also a smoke-room and dining-room. On the left are a billiard-room, a large kitchen, with rough, oak beams, and an ancient bacon-rack and a scullery with two large, old-fashioned “coppers.” There are ten bedrooms, some leading from one room to another, but there is only one stair- case.

Alice Chadwick goes on to compare The Lawn with Heathside, the house in Knutsford where Elizabeth had been brought up by her Aunt, Hannah Lumb.  The area was certainly rural, like Knutsford, which was probably a large part of its appeal.

During the three-year period between purchasing the property and hopefully taking up residence there with her husband and two unmarried daughters, Elizabeth needed to find a tenant. She had carefully calculated that an amount of £210 would be required to pay off the £200 interest to George Smith, pay £22. 10s rent on a piece of land adjoining the property and have £100 for herself. Elizabeth is quite clear about the fact that at the end of three years the house would be mortgage-free, and that would be the time to break the news to William, who was averse to borrowing money.

Unfortunately for Elizabeth, things did not quite work out as planned. When a prospective tenant was eventually found, the lady, Mrs Moray, was quibbling about the price, deeming £210 too much and offering only £170 without the extra land or £190 if the land was included, a profound blow to Elizabeth’s economic strategy. She sought male advice and was urged to accept the offer as Mrs Moray was known to be reliable. Elizabeth was disheartened, feeling that the property was being undervalued: “the house and garden seem to me alone worth £170, without the furniture”. Numerous problems were mounting into deep concerns which persisted throughout the summer months, exacerbated by the fact that George White was not prepared to move before the 29th September. This meant that while things could be organised, nothing could be put into place for over a month.

However, Elizabeth was encouraged to look to the garden as a way of generating extra income. George White had made nine tons of hay the previous year and she began to see the potential for a good profit as the selling price of hay had reached £6 10s per ton. In addition, George White had suggested that she could sell any surplus apples, potatoes and onions harvested from the land. Elizabeth also writes about selling their surplus apples at 1s -6d a bushel. However, for this work, she would need to employ a gardener, particularly as Ann Hearn (her maid) had noted that between June and September the grounds at the house were deteriorating rapidly. At the start of September, Elizabeth had found a man for the position, Mr Christian, and she began enquiring about his character. If he was her choice, it appears he was very satisfactory as in the same letter to Marianne she writes: “We like the gardener and his wife very much. They have 7 children & each works very hard and are very civil”.

Land and rental income, however, were not the only problems facing Elizabeth in her new venture. On 23rd August, she writes to Marianne that she had sent Hearn and Meta down to Holybourne to: “take measurements for choosing furniture, – and as far as they can, for matching the (already hideous) furniture”, a humorous comment on George White’s taste in décor. Decisions had to be made on what furniture to keep and what new pieces needed to be purchased before a valuation could be made. On top of this, Elizabeth had been told that the tenant had furniture, but she became increasingly annoyed and frustrated by the lack of communication on this matter from the Alton Agent.

All this was happening while Elizabeth was in the midst of writing a new serial for the Cornhill, Wives and Daughters, and the new house was proving too much of a distraction, causing Elizabeth to be behind with her writing. It was for this reason that Meta and Hearn were sent to Holybourne to organise the selection and valuation of furnishings, as Elizabeth did not wish to upset George Smith, her mortgage provider and publisher, by failing to adhere to deadlines. Moreover, it was from her writing that she expected to pay off her debt. By the end of August, her spirits were quite low and she was beginning to regret her impetuous decision: “it will be a perpetual worry, finding tenants & replacing furniture& worry tells on my writing.”

Meta was also anxious about having the sole responsibility for making decisions on the Hampshire property and ultimately asked her mother for advice. On the 30th August  Elizabeth took a cheap three-day excursion to London, travelling Wednesday, spending Thursday shopping and travelling back to Manchester the following day: “Shoolbreads, in the city (after carpets, – a failure-) Shoolbreads again, Heals, Copeland in Bond St. (for China & glass) -Mr. Smith gets us 22 ½ per cent discount there, -and did not come home till 8.” This rigorous schedule was exhausting and, coupled with the worry and expense began having adverse effects on her health which had not been strong that year. Bills were piling up, the furnishings themselves had added £500 to her £1,000 debt to George Smith. She writes to Marianne “its an unlucky house & I believe I was a fool to set my heart on the place at all.” It was to prove far unluckier than she could foresee!

By Early October she took a much-needed holiday, spending three weeks in Dieppe and a few days in Boulogne before returning to England. Marianne had gone to Manchester to look after William, and Flossy and Charlie Crompton had been invited to Holybourne as the first guests in the new home. Thurstan Holland, Marianne’s fiancé, was also invited in his role as a family member and as part of Elizabeth’s legal team. Just like a novel, this last drama of Elizabeth’s life was reaching its denouement.