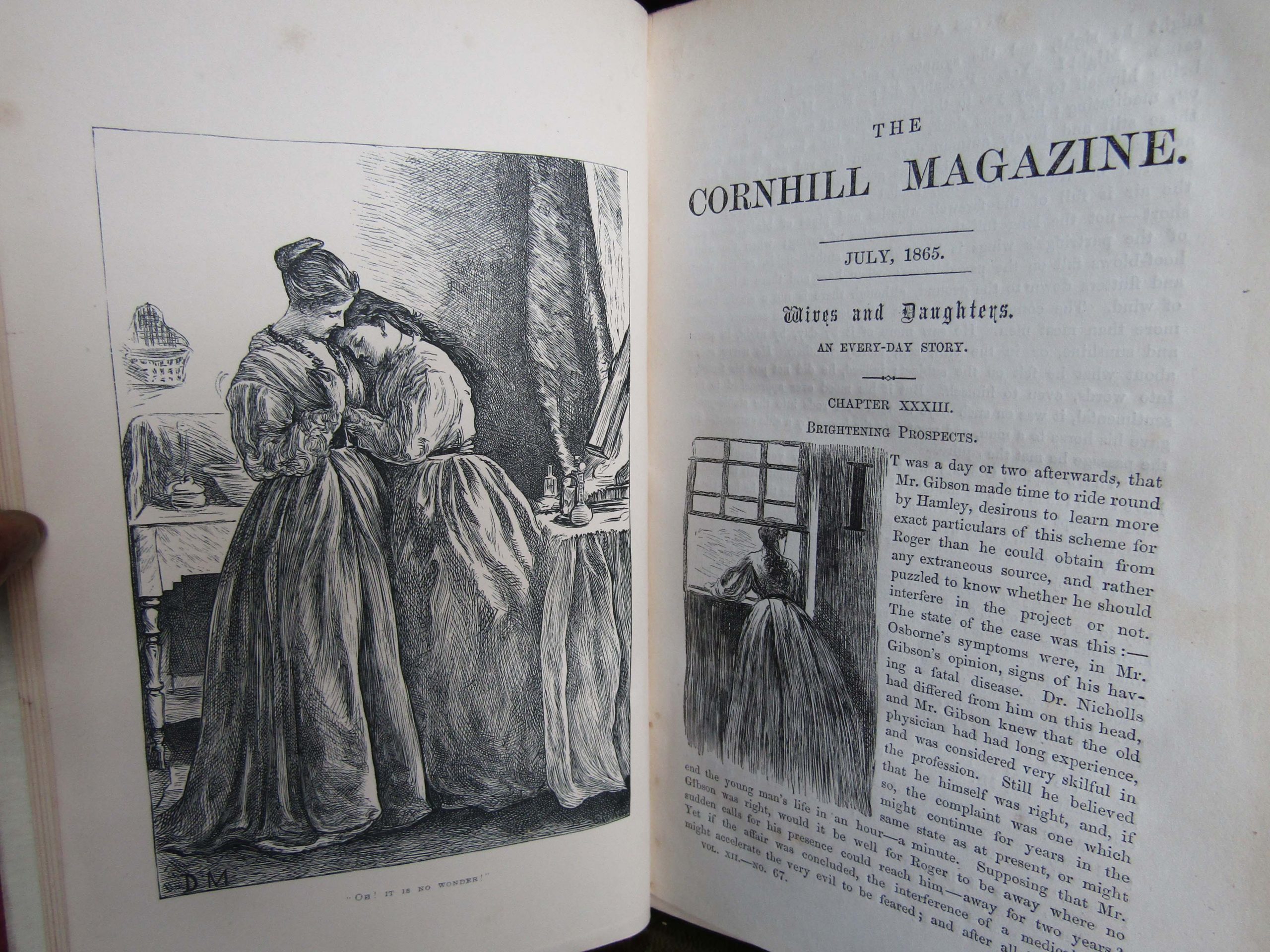 She is laid in Knutsford Chapel yard, by the aunt who was a mother to her

The last chapter of the Lawn’s historic connections with Elizabeth Gaskell is shrouded in mystery as the property was not registered with the Land Registry until the 21st century and all the old deeds are missing. The earliest deeds available pertaining to the Lawn in Holybourne, begin in 1921.

Elizabeth and her daughters returned from Boulogne at the end of October 1865. Two weeks later she was dead. The scene of that fateful Sunday afternoon in November is described in detail by Meta. The family gathering in Holybourne comprised Elizabeth, Meta, Julia, Flossy and Charles Crompton. Elizabeth had been to church in the afternoon, given a local widow a tour of the new house, and then taken afternoon tea. After tea Elizabeth “peeped out at her beloved garden” then settled in front of the fire to talk to Charlie Crompton about his father who had recently died. It was at this point that she fell forwards into Meta’s arms, dying almost immediately.  This moment was both highly dramatic and incredibly tragic. Elizabeth was only 55 years old and was, according to many critics, at the height of her powers. Wives and Daughters, which she had almost completed, is generally seen as her greatest novel.

Elizabeth’s death came at a crucial moment because at that point it is unclear as to whether the final particulars of the Deeds to The Lawn had been settled. We know from a letter in volume two of the Memorials of Two Sisters: Susanna and Catherine Winkworth that their brother-in-law William Shaen, the Gaskell family solicitor, had been invited down to Holybourne on Wednesday 15th November to settle a legal matter. Winifred Gerin in Elizabeth Gaskell: A Biography claims this is Elizabeth’s will and she was certainly negotiating the contents of a new will with William Shaen in August 1865. There is a letter to Thurstan Holland (Marianne’s fiancé and a lawyer, who was helping Elizabeth with the purchase)  August 31st, 1865 detailing her wishes for the disposal of The Lawn on her death.: “If the 4 daughters die without children, before Mr Gaskell & me, that it (Lawn) should go to their respective husbands…But I am too stupid to do more than refer to Mr Shaen who took down notes”. This is the last mention of a will in her letters. If William Shaen did indeed travel to Hampshire to finalise Elizabeth’s will, that was not his only reason for visiting The Lawn.

Jenny Uglow in, Elizabeth Gaskell: A Habit of Stories, states that William Shaen had been summoned to finalise the Deeds on The Lawn, a slightly different view to Gerin, but one which seems to chime with a paragraph in Meta Gaskell’s will which states that an Indenture was signed on: “15th November one thousand eight hundred and sixty -five between George Walpole White of the first part [the seller], the Reverend William Gaskell of the second part and Charles Crompton and Edward Thurstan Holland of the third part”. 15th November was exactly three days after Elizabeth’s death and the day on which Elizabeth had arranged for Shaen to arrive at The Lawn, sadly she was not there to receive him. Just what William Gaskell’s ‘part’ in the business was would depend on the terms laid down in the original documentation which so far has not been found. Thurstan Holland and Charlie Crompton (Florence’s husband) were initially acting on Elizabeth’s behalf since her gender and marital status would preclude her from acting in her own right. Whether their role remained the same or had changed is again a mystery. We know the house remained in the Gaskell family until 1918, but the details of ownership, without documentary evidence, are impossible to untangle.

Two other significant points can be deduced from Meta’s will dated 29th September 1913. One is that Meta Gaskell was leaving her ‘interest’ in the house to Marianne, suggesting that at least one other party had a share in the property. At that point Marianne and Meta were the only two of Elizabeth’s daughters living. Thurstan Holland and Charlie Crompton, the respective husbands of Marianne and Flossy, were also dead. Thus it is fair to assume that the other party was Marianne, especially as in 1918 Marianne, who had previously willed The Lawn to her eldest son, William Edward Thurstan Holland, put the property up for sale and altered her will to reflect this change in circumstances; bequeathing him the money from the sale instead.

The second point relates to a sale of land adjoining the house which was originally in the possession of Sir Charles John Hubert Miller, 8th Baron of Chichester. Charles Miller had extensive property in the area, including land at Chawton House. The land in question was originally rented, but at a later date was purchased by the Gaskell daughters and Charles Crompton: ‘Sir Charles John Hubert Miller of the first part my said sister Marianne Holland of the second part myself and Julia Bradford Gaskell of the third part and the said Charles Crompton of the fourth part’; again no original documentation is available so the finer details of the sale are lost. We do know that by November 15th 1865 William Gaskell knew all about his new house, a house he was never to retire to, despite his wife’s wishes. He could only honour those wishes so far – the house was bought, but it was subsequently rented. Sadly, we have no details on how the rental payments were distributed within the family-who got what is a mystery!

Much work has been done on the history of this house by a local historian, Mrs Jane Hurst. Using some of her information and entries from local directories, Electoral Rolls and newspapers it is possible to piece together a remarkable but not exhaustive chain of events in The Lawn’s history up to 1918 and beyond.

After Elizabeth’s death, it appears six years elapsed before there was any advertisement for a tenant. In April 1871, the house was advertised ‘To Let’ in the Hampshire Chronicle, but in the census of that year, there were only two residents listed, a cook and a coachman.  Four years later Elizabeth’s furniture was put up for auction and the house was advertised for rent as an unfurnished property. Several tenants followed, most of whom had connections with either the Church or the Royal Navy, much to be expected from a property close to Portsmouth and Southampton, and few stayed long, many died there.

The first occupier listed is in the 1878 Directory. He is Captain Edward Thornton formerly of the Bedfordshire Militia. By the time his will was proved in 1883, he moved from Holybourne to Reading. Following him, two clergymen resided at The Lawn. The first, Rev, Joseph Foster died there in 1880 at the age of forty-five. He could only have lived there for two years at the most, but his sister, Sarah Elizabeth, was living at The Lawn in 1881 with her nephew, a visitor and four servants. Six years later the Rev Frederick Rudge also died at The Lawn, still a relatively young man of fifty-eight. Five years after that, in 1891, William Wynne Apperley, another tenant, committed suicide there by blowing out his brains with a double-barrelled shotgun. He was only forty-one years old. So, within the space of just over ten years, The Lawn had seen the deaths of three consecutive tenants – an unlucky house indeed!

The next occupant appears to have fared better than his predecessors. Captain the Honourable Archibald Hewitt is listed in the 1895 Directory as living at The Lawn; leaving sometime around 1902 when his furniture was up for sale by auction. He did not die for another eleven years. Between 1904-1908 Rear Admiral Henry Charles Bigge resided at The Lawn. In July 1905, a small kitchen fire was noticed at 1.30 in the morning and the fire brigade was called. The local newspaper reports: “the fire was of small dimensions and confined to the kitchen”. It was probably this event which prompted a gift of £5 from Meta and Julia to the Alton Fire Brigade that same year.  Henry Bigge died at the Lawn in 1908 aged sixty-one, another name added to the list of ill-fated occupants. The last tenant there before Marianne’s notice to sell in 1918 was Robert Crossman, he managed to survive his residency during the years 1911-1915/16, his wife did not. She died there in 1914 aged fifty. Ironically the house is now a care home for the elderly!

After the sale in 1918, the house was occupied by Brigadier General Alfred Stokes and his wife, Margaret who appear on the Electoral roll for the years 1919 and 1920, but it was not until the sale house sale in 1921 by Florence Emily Luxton that any Deeds are filed.

This is a long and convoluted history much of which is shrouded in mystery because documentation is unavailable. I have tried to untangle as much as possible, but there is more to do if and when new evidence comes to light. If anyone has information that might help with this research, we would love to hear from you.