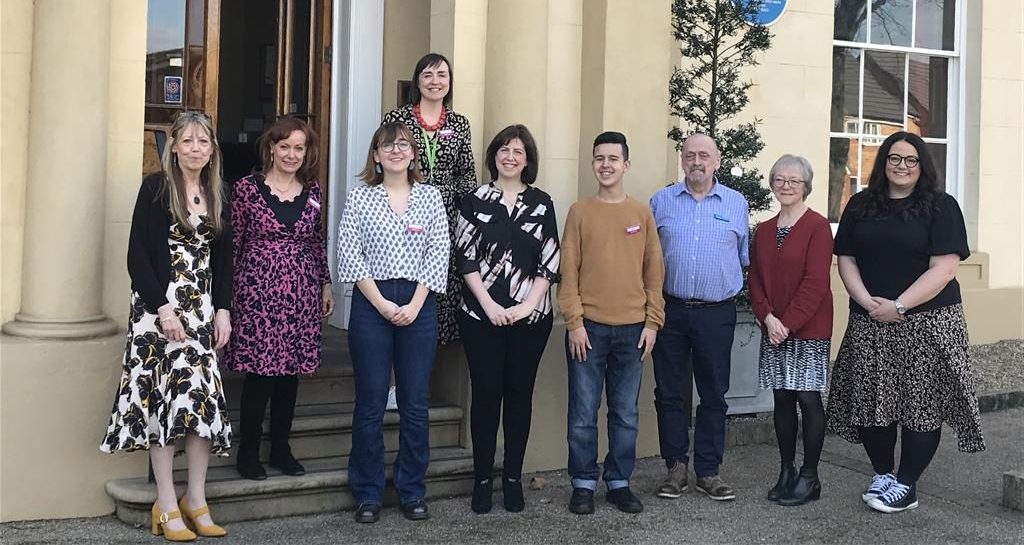 Lucy Powell MP has paid a house call to Elizabeth Gaskell’s House to mark the start of English Tourism Week (18 to 27 March) and to find out more about the important contribution to tourism made by the Grade II* listed Regency-style villa where Elizabeth wrote some of her most famous novels.

From the moment that the nation went into lockdown in March 2020 within days Elizabeth Gaskell’s House had launched its first online readalong.  This would lead to a trailblazing series of online events that have attracted an international audience across Europe, North America and even as far away as Victoria Island. And in 2021, despite being open from only May of that year, the North West regional Museum Survey indicates that Elizabeth Gaskell’s House had a positive economic impact of £129,318 on the Local Economy.

A highlight of Lucy Powell MP’s visit was meeting the small staff team and some of the many volunteers that help Elizabeth Gaskell’s House to function so successfully.  Their role in the last twelve months has included the reimagination of Elizabeth Gaskell’s bedroom.  Carefully sourced period pieces, objects from the Gaskell Family Collection, donations, commissions and the handcraft skills of volunteers have transformed a blank canvas into a room that adds a completely new and exciting dimension to the visitor experience.

Lucy Powell MP says, “Elizabeth Gaskell’s house is a fantastic site, and it was great to meet with some of their brilliant team of staff and volunteers to mark the start of English Tourism Week.  The house has had a huge impact on Manchester’s economy and I was particularly impressed by how they’ve managed to bring Elizabeth Gaskell – and Manchester itself – to an international audience with a series of online events during the pandemic.

“We’re incredibly lucky to have such a beautiful building with such rich history just outside the city centre and I’d urge anyone to find the time to visit.”

“Elizabeth Gaskell’s House provides a terrific example of the contribution that independent heritage makes to tourism in England. The story of the great novelist is told through the house in which she lived and the garden that she loved so much. At Historic Houses, we are delighted that Elizabeth Gaskell’s House is supporting English Tourism Week, which shines a light on wonderful destinations to visit all over the country.”

Looking to the future Elizabeth Gaskell’s House is adding its voice to the Historic Houses Association’s call for the temporary cut on VAT (from 20% to 12.5%) to be made permanent.  This move would put the country in line with the rest of Europe and make prices more competitive at a time when there is still so much more to do to ensure the survival of heritage attractions and to encourage national and overseas audiences back to the levels they once were.

Sally Jastrzebski-Lloyd, House Manager at Elizabeth Gaskell’s House, says, “We are all going to need political and public support to get back on our feet and promote Brand Britain to the world. It meant a great deal to us that Lucy Powell MP came to visit us at a time when English Tourism Week is helping to fly the flag for a sector that contributes so much to the economy and has the power to enrich people’s lives.  As a heritage attraction we are proud of the role that we play within Manchester, a UNESCO City of Literature.”

Elizabeth Gaskell’s House is open to visitors every Wednesday, Thursday and Sunday from 11:00am to 4:30pm.  Entry is £6.50 for adults, £5.50 for concessions and free for children under 16, when accompanied by an adult.  Tickets can be pre-booked via www.ticketsource.co.uk/elizabeth-gaskell-house.