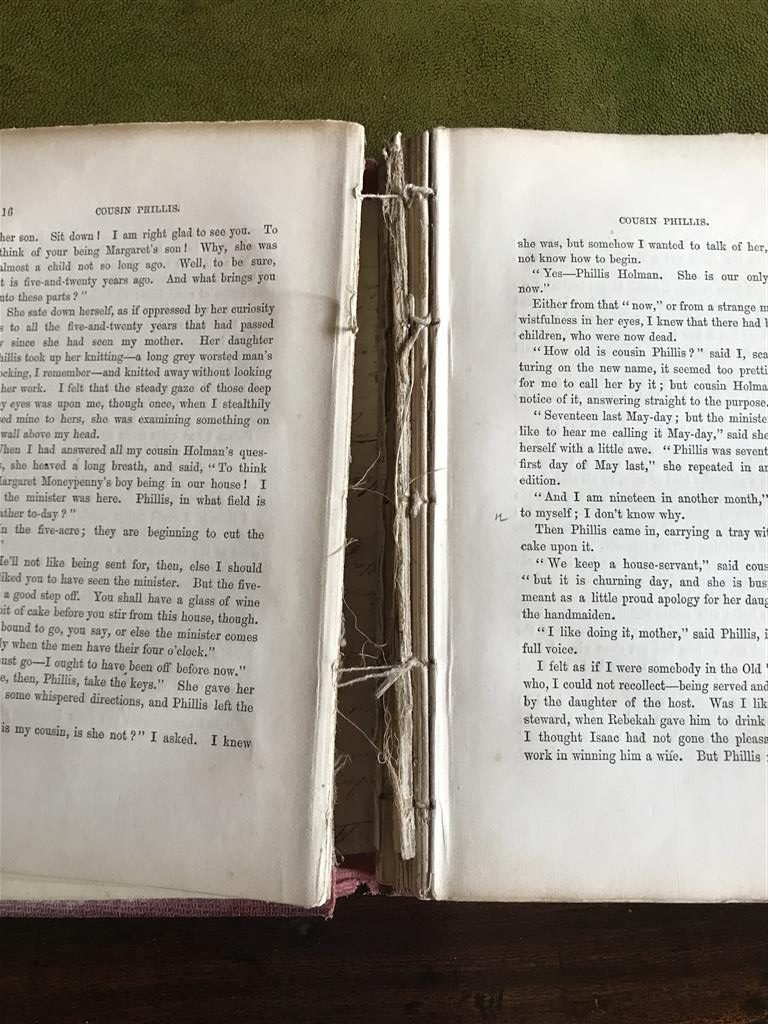 Late in 2021, Elizabeth Gaskell’s House received a grant from the Pilgrim Trust as part of the Association of Independent Museums (AIM) Collections Remedial Conservation Grant Scheme. Such grants are specifically for small to medium sized museums to care for their collections more effectively and efficiently and to meet the standards required for accreditation. They encourage applications from museums to bring in conservation expertise to ensure that collections care and conservation meets professional standards. As the house hopes to apply for accreditation in 2023 this would be a good way of demonstrating our care for some of the books in our possession.

At the House we have a policy of encouraging interested visitors to handle our objects and we have further encouraged interest in books by placing small bookplates inside many, explaining why they are of specific interest and relevance in our collection. Inevitably this means that with repeat handling, their condition starts to deteriorate, especially if they have been fragile since they arrived. To counter this, a small team of volunteers had already taken part in 2 hands-on workshops with a professional bookbinder, named Brian Cole, to learn how to undertake some book repairs, but we would not be competent enough to take on work required by these particular books. Brian works for The Leeds Library and has carried out some work for The Portico Library in Manchester. He was approved for this project by the AIM.

Sally (House Manager) asked us to pick eight books to send to Brian for repair. We already had several set aside which were too fragile to be on the shelves but too significant to be disposed of, so choosing eight was a straightforward task. We could have picked many more, as a significant proportion of books in our collection have damaged spines, detached covers and loose pages and we hope that there will be future opportunities to have more repaired. On this occasion we wanted to choose titles of specific interest and relevance to the house, and to ensure that some of Elizabeth Gaskell’s own titles were included.

We chose 2 Gaskell titles, Mary Barton and Cousin Phillis; Jane Eyre by Charlotte Bronte and a copy of Sharpe’s London magazine with relevance to Gaskell and Bronte; a 1st edition of Bleak House by Charles Dickens; works by Elizabeth Gaskell’s friends CE Norton and John Ruskin and an unusual account of the Battle of Waterloo published in Manchester.

The particular “needs” of each book were photographed and sent to Brian to ensure he could undertake the work required. He made an initial assessment and provided a quote and timeline for the work to be carried out. The books were duly parcelled up and despatched to him.

Each of the eight books has its own interesting story, in some instances rather too long to be written in full here. In brief, this is why they were chosen.

The Mary Barton sent was an 1849 edition published in Germany (in English) for travellers on the continent by the publisher Tauchnitz. This publisher was instrumental in establishing international copyright for English and American authors. Elizabeth knew him and valued his fairness in paying authors for the rights to publish their work.

Cousin Phillis (1864) had been serialised in the Cornhill magazine – an up-market periodical and aimed at a sophisticated audience.  In 1863 in a letter to the publisher it appears Elizabeth was unclear as to how many parts she was to submit.  Described by her as ‘a complete fragment‘ the novella has since been widely praised.  It was important that such a significant work should be available for our visitors to handle.  A new spine has been attached to the book ensuring its longevity.

Jane Eyre, published under the pseudonym Currer Bell established Charlotte Bronte’s reputation. Elizabeth was eager to uncover her identity and when they eventually met, they became friends who visited each other’s homes. She is an important part of the story we tell at the House and we needed a more robust copy to show to visitors. Our edition was published in 1885, though we know Elizabeth must have had an earlier copy as she had read it by April 1848, describing it as ‘an uncommon book. I don’t know if I like it or dislike it‘.

We sent a volume of Sharpe’s London Magazine dated May-June 1855 as this edition contains an anonymous article written about Charlotte Bronte shortly after her death. Enraged by the tone of the article, Charlotte’s friend Ellen Nussey suggested to Patrick Bronte, Charlotte’s father, that Elizabeth Gaskell should be approached to write her life, which became her famous Life of Charlotte Bronte. Our volume of Sharpe was completely broken and now has its covers firmly attached to the pages once more.

A copy of Bleak House by Charles Dickens was sorely in need of some care and attention – the front cover was completely detached leaving an exposed spine.  We were delighted when the book was returned, restored to its former glory.  It is a first UK 1853 edition, probably bound from the original serialised parts, and contains three typographical errors present in the first issue.

The American art historian and Unitarian Charles Eliot Norton was a friend and regular correspondent of Elizabeth right up until her death in 1865. However, such was the bond between him and the Gaskell family they continued to keep in touch.  In 1880 he sent a copy of his latest and influential work – Historical Studies in the Middle  Ages: Venice, Florence, Siena to her daughter Meta Gaskell who wrote upon receiving it… ‘thank you a thousand thousand times’.  Our copy of the book has been given a new lease of life by the repair of the front cover and spine.

We have a collection of over 50 titles either by or about John Ruskin, the leading art critic, writer and polymath of the Victorian age.  Elizabeth knew and admired his work; in 1857 she writes to Charles Eliot Norton that were ‘she shut up in prison or on a desolate island, the book by a living author she would take would be Ruskin’s Modern Painters’.  Our copy of another work by Ruskin, Lectures on Art is a series of eight public lectures given by Ruskin when he was appointed to the first Slade Professor of Fine Arts at Oxford University.  A new spine has been attached with new gilt lettering.

Finally, the oldest volume sent was a History of the Battle of Waterloo (vol 4) published in 1816 by Joshua Gleave, a Manchester bookseller and publisher. Interesting in itself, as it was written so soon after the battle in 1815, we were particularly excited by its Manchester origins which led us into trying to find out more about this Manchester business.  The book was in very poor condition with a cracked leather spine, detached covers and loose tissue. It now looks renewed and an asset to the shelves.

The books, now all returned from Brian,  have been carefully restored with appropriate colours and materials. They have returned to the shelves of William’s study and we will all be proud to show them off to many visitors for years to come.

Read more blogs about the Study and our collection of books