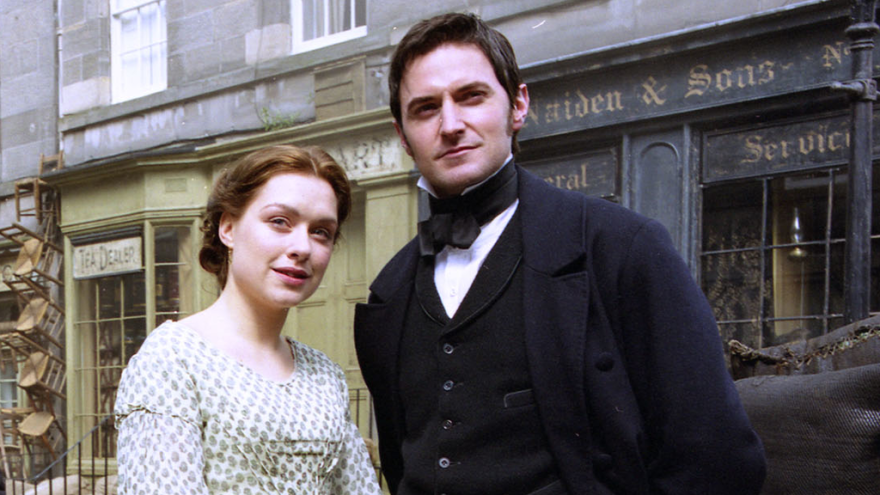 “He shook hands with Margaret. He knew it was the first time their hands had met, though she was perfectly unconscious of the fact.” North and South, 1855

Celebrate the classic North and South with a series of events in 2022 exploring the story, industrial background and TV adaptation of one of Elizabeth Gaskell’s most popular and enduring works. Written in 1855 and following the story of heroine Margaret Hale and her relationship with millowner John Thornton, it has been described as a ‘condition of England’ novel. Find out more with this season of special events including an exciting new partnership with Jane Austen’s House. All online unless otherwise stated. Look out for further events to be added in 2022.

North and South: An Introduction

Our new season of ‘North and South’ events begins with Elizabeth William’s introduction to one of Elizabeth Gaskell’s best known and most loved novels. One of the first industrial novels to describe class strife, it follows heroine Margaret Hale as she moves from the rural south to the manufacturing north and her conflicted relationship with mill owner John Thornton. Find out more about the context in which the book was written, including industrial Manchester and Elizabeth’s personal life, and arguments with her editor, Charles Dickens.

A Tale of Two Houses – Lizzy Bennet and Margaret Hale

With Libby Tempest, Chair of the Gaskell Society

In 2022 we are launching an exciting new partnership with Jane Austen’s House, exploring the work, life and times of two giants of 19th century literature, Jane Austen and Elizabeth Gaskell. In this lively online event we take a closer look at two of literature’s best loved heroines – Lizzy Bennet from ‘Pride & Prejudice’ and Margaret Hale from ‘North and South’.

Discover how our heroines each appear to defy convention in these classic novels by Jane Austen and Elizabeth Gaskell. Join Libby Tempest, Chair of the Gaskell Society, and Ellora Sutton, Creative Engagement Officer at Jane Austen’s House, to take a closer look at the comparisons between Lizzy and Margaret as they speak their minds to shape the world around them, and enjoy readings from two blockbuster novels of the nineteenth century.

North and South: A TV Classic

By Libby Tempest, Chair of the Gaskell Society

The BBC adaptation of Elizabeth Gaskell’s classic novel was a surprise instant hit with television audiences when it aired in 2004. A key part of its appeal was the performance of the two leads, Richard Armitage as smouldering mill owner John Thornton and Daniela Denby-Ashe as heroine Margaret Hale. Libby Tempest explores why we all love this adaptation and compares it with the original novel before asking the question, what effect did the success of everyone’s favourite adaptation have on Elizabeth Gaskell’s reputation?

Milton and Manchester: The backdrop to North and South

The romance of Elizabeth Gaskell’s famous novel ‘North and South’ is set against the harsh industrial backdrop of her own city of Manchester, thinly disguised as ‘Milton’ in her writing. Her description of industrial strife between millowner John Thornton and his workers, and heroine Margaret Hale’s sympathy for the working classes has led it to be described as a ‘condition of England’ novel. So, what was the real social and industrial backdrop to ‘North and South’? Was Thornton’s factory lockout based on real events? And how did Gaskell imagine class conflict could be resolved? Join Dr Michael Sanders from Manchester University to find out more.