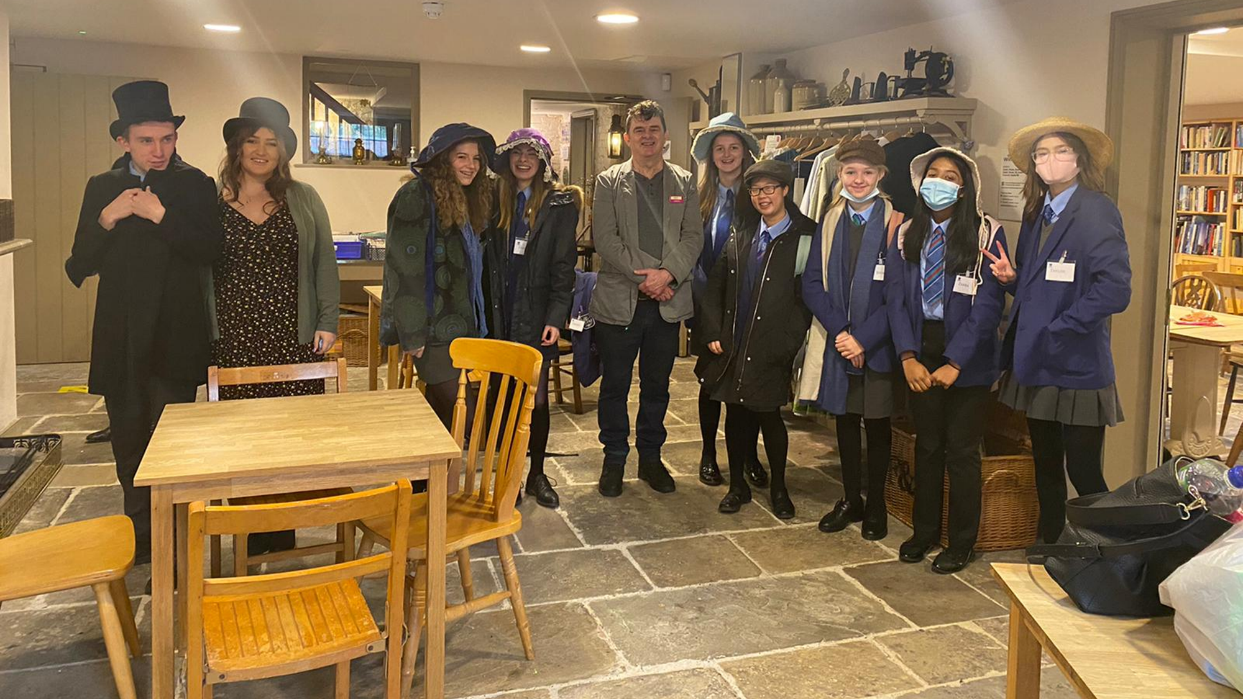 Stepping into the world of Elizabeth Gaskell

In November 2021, Elizabeth Gaskell’s House warmly opened their doors to pupils from St Thomas More School who had been eagerly awaiting the opportunity to step into the world of Elizabeth Gaskell. The purpose behind our visit was to allow a group of our pupils who had shown interest in creative writing to immerse themselves into the lifestyle of an iconic novelist such as Elizabeth Gaskell and to broaden their readership by studying a celebrated female writer, whose themes included social divisions, poverty, politics, and reform, which were rare and extremely progressive topics for a female author from the nineteenth century to discuss in her work. Our selection of Gaskell as our focus novelist was in hopes to embolden and inspire our young writers, and the team at Elizabeth Gaskell’s House certainly ensured this!

On arrival, our wonderful tour guide Philip instantly secured the attention of our pupils and was eager to adapt the tour to our purpose of inspiring young writers and to additionally support a selection of the pupils who wanted to write an article of their experience at the house for the school magazine. The tour itself was educational, inspiring, thought-provoking, humorous and emotive of Elizabeth and her whole family. Many of the pupils commented on the warmth and family-centred tone that the house offered. They especially enjoyed the feeling of comfort in that they could interact within the house, preferring this hands-on approach over that of a typical museum setting.

When we sat to reflect on our experience at the end of the tour some of the points of enjoyment from our pupils included discovering Elizabeth Gaskell’s playfulness and humour, especially in regards to her letter writing which pupils found comedic and witty, especially when delivered to perfection by our tour guide! We also discussed the surprise of some pupils when discovering that Charles Dickens sometimes disapproved of Elizabeth Gaskell when he acted as her editor. This led to our continuation of discussing the role of women, especially writers, in nineteenth century Britain, which had been a key theme throughout our tour. Pupils were encouraged to compare and contrast issues that were topical of Gaskell’s period and how relevant so many still are today. The pupils were horrified to hear that a novelist as successful as Elizabeth Gaskell had to ask her husband to take books out of certain libraries and clubs for her! Yet, this shock and deliverance of such an excellent tour has really inspired our pupils to make the most out of all the opportunities and education they can have which so many before them had to fight for and to continue the fight for those still restrained from, what pupils deemed, basic freedoms. Just to gain the knowledge from the tour that Elizabeth Gaskell’s first publication of ‘Mary Barton’ was anonymous and that her friend, visitor of the house and fellow writer, Charlotte Brontë had used a male pseudonym when initial published and for this amazing, advanced female writers to not be given the respect and credit they deserved was enough for our female pupils to turn red with anger – could the tour of this house empowered our young people anymore? What an impact!

Additionally, a key comment from our pupils was the sense that even with time this house was still very much a home. On discovery of the family being great art lovers, one of our pupils was encouraged to take out her sketchbook and to draw and be inspired by her surroundings, and our tour guide very kindly spent time talking about the art work with her and discussing her own drawings. Furthermore, our pupils were most impressed with the piano and were even given permission to play. To be able to sit in the period rooms on an actual furniture whilst listening to a young pupil fill the house with music as it once would have been was joyous, and so considerate of the team to enable this to happen. It was like the pupils saying of the day, ‘stepping into history’.

My main interest in bringing pupils to Elizabeth Gaskell’s House was for several reasons; firstly, because she has always been one of my favourite authors and I was keen to share my inspiration to our pupils, secondly, being based in the North- West, I think it important to pupil’s education but also ambition to share the history but also the successes of those right on the door-steps of our next generation of talent, I would encourage any school group, families or individuals willing to learn to go and experience the house. Finally, if anything, my key motive was to push our pupils and even school to experience more than what is just on the curriculum. As important as technique and studying for exams are, we should also try and experience more than what is just set on the curriculum and enable our young people to find the fun, inspiration and love of literature and history which they will not have to be tested on.

When asked about their perspectives before coming to the house and after the tour, the pupils were unanimous in admitting that as a group overall, none of them had known much about Elizabeth Gakell and her family, as they hadn’t studied her at school so hadn’t read the books. They knew she was a novelist but not about her activism and progressivism and had been inspired from what they had learnt that day. They all agreed that after visiting the house they would now read her books or watch the TV series as they were intrigued by her mind, her experience, and the themes discussed within the tour. The main success of the day for me personally was that every single one of our young writers were inspired to further their own writing in a style similar to Gaskell’s, to not try too hard, or to follow the market of what is popular, but to write what they know; the social problems they encounter, the lives of the local area they live amongst and to write who they are, to be a voice for their generation as Gaskell was for hers.

Our pupils could picture Gaskell; her world, her mind, her politics. They were empowered. On behalf of our pupils and school I can only say a massive thank you to the team at Elizabeth Gaskell’s House who went above and beyond to give our students the most memorable experience. Thank you!

Find out more about bringing your school group (primary or secondary) to Elizabeth Gaskell’s House.