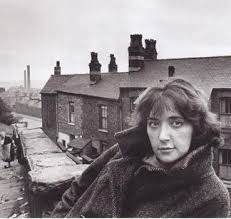 Sheila Mary Delaney was born on 25 November 1938 and was brought up in Salford, the proud granddaughter of Irish emigrants, which is perhaps one of the reasons why she changed the spelling of her first name to Shelagh in her teens, to reflect her Irish ancestry.

She wrote her most famous play, A Taste of Honey, when she was 19. There are a number of stories about what prompted her to write the play. One is that after seeing Terence Rattigans’s Variation on a Theme at the Opera House in Manchester, she felt she could write a much better play which portrayed homosexuality sensitively, which for her Rattigan had failed to do. Her daughter Charlotte Delaney tells a different story – ‘It was while watching a production of Waiting for Godot whilst working as an usherette, that gave her the push she needed to lock herself away with a borrowed typewriter and write A Taste of Honey.’ And there’s probably truth in both these versions of the play’s creation.

In April 1958, Shelagh Delaney sent A Taste of Honey to Joan Littlewood’s Theatre Workshop. Joan Littlewood needs a brief aside here – she was one of the most influential and radical directors of the twentieth century who explicitly set out to create bold and challenging theatrical experiences which resonated with and were accessible to everyone across all social classes. The play was accepted and Shelagh Delaney had found a company which was a good fit for her play.

A Taste of Honey had its first performance on 27 May 1959 at the Theatre Royal, Stratford East. Gerry Raffles, from the Theatre Workshop, said at the time ‘ Quite apart from it’s meaty content, we believe we have found a real dramatist.’ It is difficult to over estimate the importance of A Taste of Honey. Delaney was part of a new wave of writing – an Angry Young Woman in a band of so-called Angry Young Men – which was giving a voice to the lives and experiences of working people in all their complex humanity. Within this tradition, Delaney importantly gives a voice to working women who found it almost impossible to tell their stories and find an audience.

Delaney adapted the play into a film – memorably starring Rita Tushingham – which was released in 1961 , winning a BAFTA award for Best British Screenplay and a Writers Guild of Great Britain Award in 1962.

Her other notable achievements include writing the screenplay for the film Charlie Bubbles which was released in 1967. Directed by Albert Finney, he also starred in the film with Liza Minelli and Billie Whitelaw. She also wrote the screenplay for the 1985 film, Dance with a Stranger which tells the story of Ruth Ellis, the last woman in England to be hanged for murder.

While Shelagh Delaney is writing in a very different tradition from Elizabeth Gaskell , and from a very different perspective, I find a number of parallels in their work. One of the most important for me is their commitment to telling the stories of people we can often ignore, and asking us to reflect with generosity on the experiences which have led to their life choices. John Barton and Ruth have our sympathy as much as Jo and Helen do – a formidable achievement for both of them.

If you have enjoyed this blog, read the others in our Lockdown 2.0 series which focuses on Manchester women writers. We’ve enjoyed meeting Frances Hodgson Burnett and Dodie Smith.

« An invitation to Chapel…
An Exciting Online Adventure »