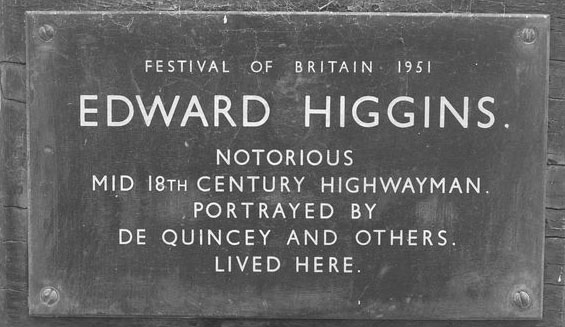 The Secret Life of Edward Higgins: The Squire’s Story

The Squire’s Story was published in the Extra Christmas Number of Dickens’ Household Words in December 1853. After looking at some interesting Welsh locations in The Well of Penmorfa and The Doom of the Griffiths Elizabeth returns to her childhood home in Knutsford for a tale of deception and highway robbery. The Squire’s Story is set in Barford which, despite having much in common with Knutsford, is for the purposes of the story transposed to Derbyshire and Highwayman Higgins’ house is positioned on the road to Derby.

In 1756 a notorious highwayman named Edward Higgins lived at Heath House in Knutsford. Elizabeth Gaskell was brought up by her aunt, Hannah Lumb, at Heathside in Knutsford and the two houses were only separated by a narrow strip of land making Elizabeth’s Aunt and Mrs Grey, who occupied the house at that time, neighbours. As Elizabeth was growing up in the early nineteenth century, she would have been aware of the stories surrounding Heath House and its infamous resident. It must have been very exciting for an imaginative child like Elizabeth to live so close to the source of a local legend, and she never missed the opportunity for a good story.

Heath House was slightly more expensive to rent than Hannah Lumb’s property which is situated opposite the MAR of Market on the map; in fact, it was two houses, number 19 and 20, on a road which was to become Gaskell Avenue.  Elizabeth may well have been inside as she gives a very detailed description of the property in The Squire’s Story; the squire being none other than the notorious highwayman Edward Higgins.

In her story, Elizabeth names the house “The White House, from its being covered with a greyish kind of stucco”, and this tradition has been maintained, perhaps to pander to the Knutsford tourists who come to walk in the steps of the town’s famous writer.

The fact that Heath House, from its numbering, appears to have been two cottages which had been joined would explain Elizabeth’s rather derogatory description of the living accommodation:

“It had a good garden to the back, and Mr. Clavering had built capital stables, with what were then considered the latest improvement…otherwise it had few recommendations. There were many bedrooms; some entered through others, even to the number of five, leading one beyond the other; several sitting-rooms of the small and poky kind, wainscoted round with wood, and then painted a heavy slate colour; one good dining-room, and a drawing-room over it, both looking into the garden, with pleasant bow-windows.”

Historically Edward Higgins, named Robinson by Elizabeth in her story, inveigled himself into the Knutsford society through his show of wealth and his ability give a good account of himself at the hunt.  Here Elizabeth can’t resist a gibe at the old rural aristocracy whose measure of personal worth is predicated mainly on horsemanship. Sir Harry’s

“approbation was withheld until he had seen a man on horseback; and if his seat there was square and easy, his hand light, and his courage good, Sir Harry hailed him as a brother.”

In addition, Higgins was very liberal with money, ensuring that only “well-selected wines, [… were] lavishly dispensed among his guests” and never dealing in credit. He was also a great entertainer, often heard singing comic songs and recounting humorous stories; a man of surface, not depths, and the town was taken in by him:

“he cares no more for money than for water; he spends like a prince… I don’t know who his family are, but he seals with a coat of arms, which may tell you if you want to know”

Very quickly Higgins, the new resident at the White House, becomes an integral part of the Barford hierarchy, mixing in their social milieu and audaciously stealing jewellery from Lady Egerton of Tatton while availing himself of their hospitality.  It is only the Barford “bird of ill-omen”, a Miss Prat, who is not taken in by Higgins.

But it is not just jewellery that he steals, the local squire’s daughter becomes his possession after a speedy journey to Gretna Green, ensuring Higgins can access his bride’s fortune– a clever move by the daring, or perhaps brazen highwayman of Elizabeth’s story.

The real Higgins did marry, but she was a local girl named Catherine and not the squire’s daughter. Her father was called William Bertles, and sadly, for those loving romance and adventure, the real Mr Higgins married in the local parish church in April 1756, not Gretna Green. His bride, Catherine Bertles was only just twenty. Neither does it appear that the historical Catherine was an heiress with £10,000 a year.

Moreover, the historical Higgins continued to make headlines after his execution by hanging in Camarthen in 1775. As his body had been sold to a London surgeon to raise money for his wife and sister, it was cut down before the prerequisite hour had passed. However, when the medical apprentice was about to begin work on the cadaver, Higgins allegedly came back to life and had to be executed for a second time. The reality is more ‘macabre’ than Elizabeth’s story; I wonder if she knew this, I expect not, as she would never have missed the opportunity to weave more drama into her tale.   The full story of Higgins’ imprisonment and execution can be read at Wales Online