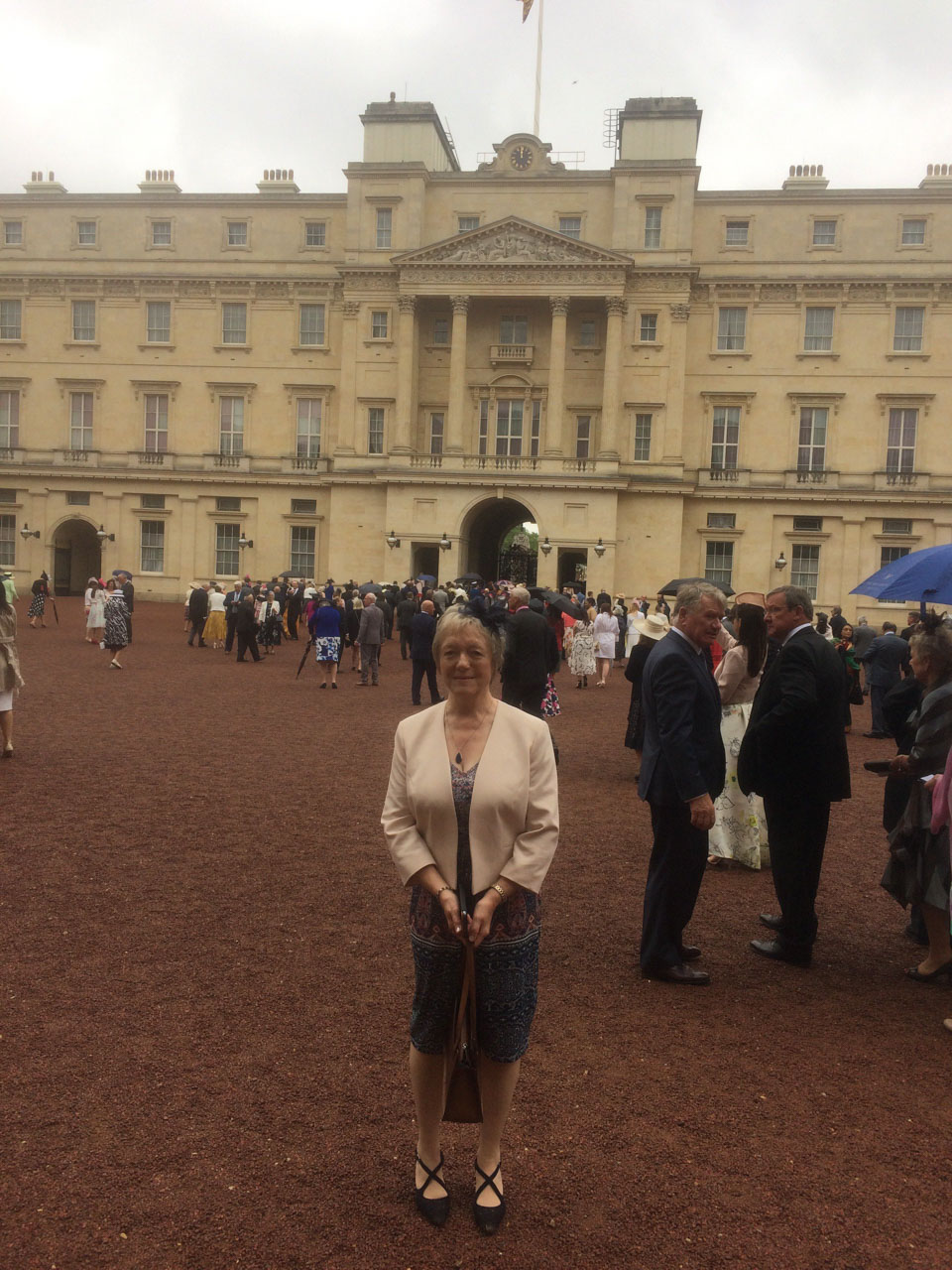 Very occasionally something comes along which you know instinctively might be a once in a lifetime opportunity. One of these has recently happened to me, thanks to Elizabeth Gaskell House.

A few weeks ago, “The House” was notified that the volunteer team was to be awarded a Queen’s Award for Voluntary Service. This is like an MBE for volunteer teams in organisations where more than half the people involved are volunteers. The award was not to be officially announced until June 2nd so had to remain “hush hush”, but in the interim, two representatives from the house were invited to attend a Queen’s Garden Party at Buckingham Palace. I was lucky enough to be the volunteer asked to attend the garden party with our House Manager, Sally.

Now I’m not really a dressing up sort of person. Almost my first question was “Will I have to wear a hat?” and the answer almost put me off. But I also quickly wondered to myself whether or not I was the right person to be chosen. This was after all,  an award for the team and it felt unfair that only one of us could go. Was I the best person?  Sally pointed out to me the range of activity I have been involved in since I started volunteering : I started in the garden before the house opened and have gradually taken on more activity in the house. I volunteer on most Thursdays, working in the tea room and as a room steward, I am leading the book documentation project and spend most Monday mornings cataloguing books. I also look after occasional group tours and write blogs and bookplates. The range of activity I undertake seemed to qualify me to be an all-round representative.

Once the decision to go had been taken I determined  to make the most of the occasion and threw myself into deciding an outfit, finding out what was likely to happen and most of all, looking forward to this unique occasion. The Queen holds 3 summer garden parties at Buckingham Palace and we went on the last date, May 29th.

The first fun we had was jumping in a taxi at Euston and saying “Buckingham Palace” to a less-than –impressed taxi driver. He only cheered up when he saw more smart suits and fascinators heading in the same direction and realised that a “big” event was happening.  He dropped us near one of the back entrances on Grosvenor Place where a line of smartly dressed people waited to be admitted. We had decided to go in by one of the rear gates as we thought the queue would be shorter, which it was, and that we would be able to see some of the garden. The one disappointment of the day was the poor weather we had, it was damp and chilly, so we didn’t really think we would want to wander round the garden;  we did see some of it as we headed up towards the palace and  I noticed lots of tall foxgloves among the shrubs and trees. 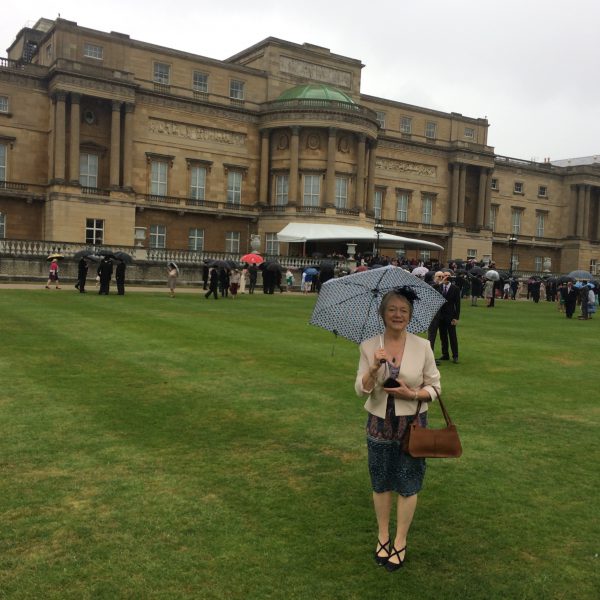 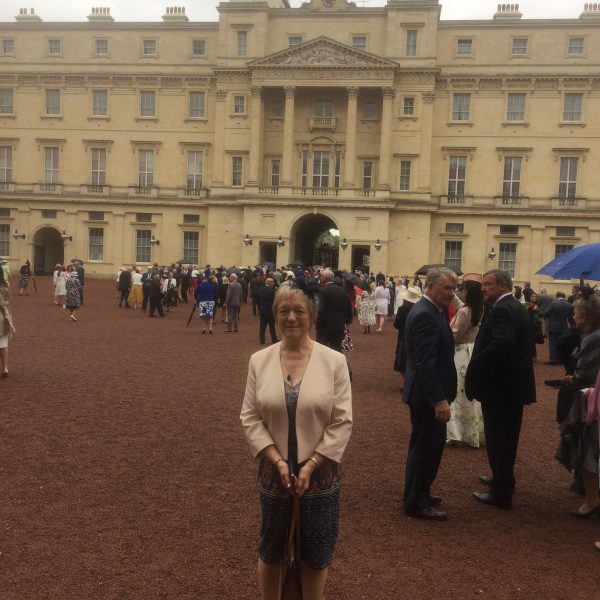 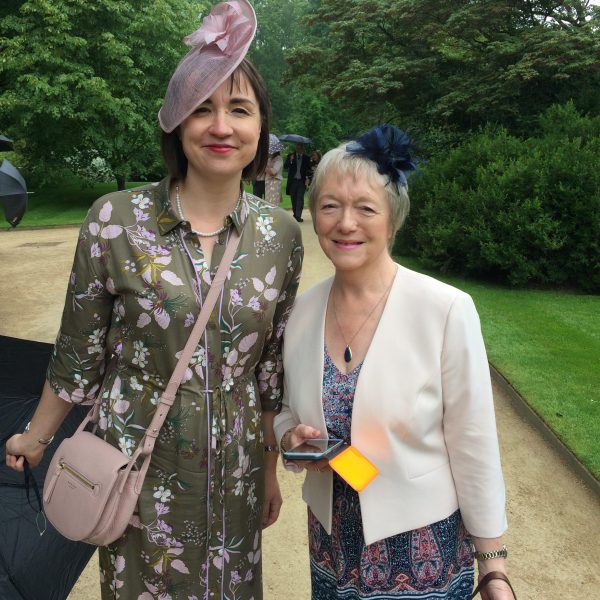 The garden party takes place in the back garden of Buckingham Palace where there is a large lawn leading on to a lake and landscaped garden. The lawn had been set with many chairs and tables, but unfortunately the weather wasn’t fit for people to take advantage of these.

Anxious not to miss the choice on offer, we headed straight for the tea tent where we found efficiently short queues.  We were served tea and appropriately dainty sandwiches, wraps, cakes and tartlets.

We knew the Royals emerged at 4pm so shortly beforehand everyone started milling about outside. We were marshalled into corridors, in the politest possible manner, by mature gentlemen in morning suits, carrying rolled umbrellas which they used to straighten us into rows. These corridors were created for the royal family members to walk down.

We found ourselves in the front row of a corridor which Prince Harry walked down and were close to where he stopped to talk to some pre-selected guests. We then really wanted to see the Queen, who was walking down another corridor behind us. Of course we were at the back of the line for this, so I had really no hope of seeing more than a flash of her pink coat. Luckily Sally is taller, so she was able to give me a commentary and managed to take some photos over other people’s heads. The general verdict was that The Queen was looking lovely in her coordinated pink hat and coat.

After that excitement it was a matter of keeping moving to keep warm, more tea and cakes and a quick photo opportunity with some “Beefeaters”. I never knew before that they left the Tower of London for other duties. They guarded the Royal Tea Tent here. We also ventured into the back of the palace where we were allowed to look as well as along the back terrace. At 5.30  a further corridor formed to watch the royal party leave  and we caught glimpses of Princesses Beatrice and Eugenie, as well as the Dukes of Kent and Gloucester.  I was struck in the queues I waited in, by how respectful the atmosphere was. People chatted to each other as they waited but the general tone was quite solemn and not as giddy as some large crowds can easily be. 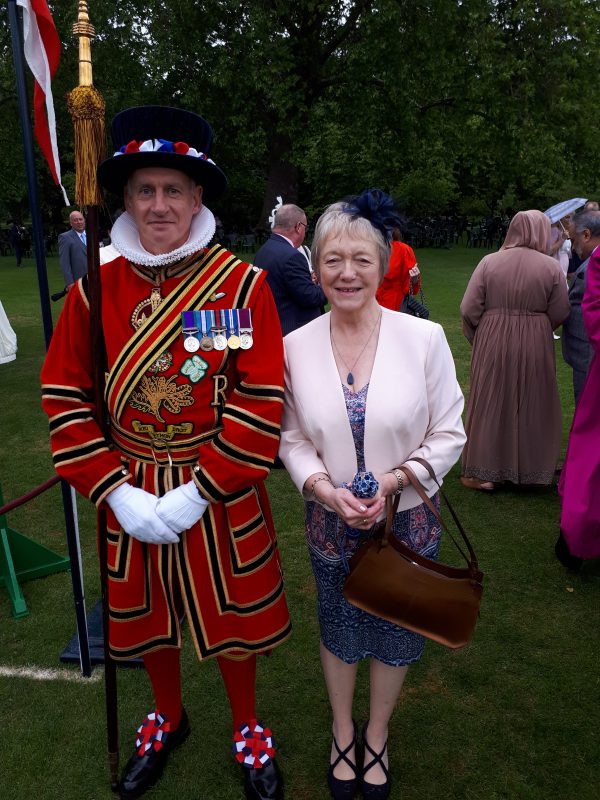 Perhaps the atmosphere would have been different on a warm sunny day? Bands were playing, ice creams were served, 8,000 guests were decoratively dressed. We had to imagine sitting relaxing in sunshine chatting to some of the other guests, but we tried to remain excited by the occasion. We did talk to some of the other guests who all seemed to represent public service. There were clergymen and military personnel, some people in national costume and I believe lots of sport stars. Papers the next day were full of the Queen talking to the England Cricket Team and quite by chance I took a snap of football pundit Ian Wright.

As we had entered by a back gate, we thought we would leave in style through the front entrance. This seemed more familiar as the inner courtyard is seen on many a state occasion on television. It  felt memorable  to be standing there among so many others busily taking photos of themselves and each other and we joined in with enthusiasm. As we emerged through the railings onto the Mall it was fun to hear passers by saying they wondered what had been going on. We knew and we’d been there!

This was a wonderful opportunity to do something completely unexpected and which I never dreamt I would be doing when I first started volunteering at Elizabeth Gaskell’s House. I am truly grateful to have been given this chance. I only wish we could have taken a minibus full of my fellow volunteers with us.