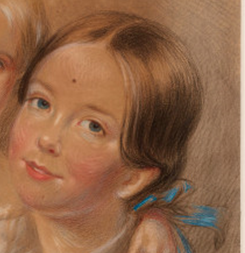 …such a sense of duty and she obeys her sense

Elizabeth Stevenson married Rev. William Gaskell at St John’s Church, Knutsford in 1832 and on 10th July 1833 she gave birth to a stillborn girl. Jenny Uglow writes in her biography “She saw the baby but did not give her a name.” This early death of a child had a huge impact on Elizabeth and in July 1836 she wrote a sonnet ‘On visiting the Grave of my Still Born Child’. This was the first death of three that Elizabeth was to experience during her childbearing years. Between 1833 and 1846 Elizabeth gave birth to four daughters who survived her.

Motherhood, however, was not denied Elizabeth for long. In September 1834 she gave birth to another daughter, this time a live child who she named Marianne, often shortened to Polly.  The death of her first child made Elizabeth very anxious to protect her daughter and she wrote about these anxieties in a private diary as a record to be passed onto her children. It was published in 1996 as Private Voices. It is clear from these entries that Marianne proved a worry:

“I am afraid from being an only child, she is a little too dependent on others…to be sure she is very weak in her limbs, scarcely attempting to walk with two hands though nearly 16 months”.

But ironically Marianne, the firstborn, was the last of Elizabeth’s children to die. She outlived her younger sister Margaret by seven years.

In 1838 William and Elizabeth reasoned against home-schooling and sent their daughter to infant school: “not to advance her in any branch of learning…but to perfect her habits of obedience, to give her an idea of conquering difficulties by perseverance”. She was, according to her mother, “a sweet little creature in general full of good feeling”, but one who, by the time she was seven, was causing more anxiety because of her dependence on others. Marianne required “a great deal of love and sympathy”.

In 1845, after the family’s move to Upper Rumford Street, Elizabeth employed a governess, Barbara Fergusson, often referred to as Daddy. While Miss Fergusson was liked by the family, she became unsuitable to manage the girls so after a period of home tutoring Marianne was sent to school. Elizabeth was careful in her choice of educational establishments and as Marianne was emotionally delicate, she was sent to Mary Ann Lalor’s school at Holly Hill in Hampstead. The school was small, only twelve pupils and 4 women servants, it was also Unitarian and as such pupils would be educated on Unitarian principles. Mary’s husband, John, and ex- barrister was also editor of the Unitarian Examiner.

While school life improved Marianne’s independence and sense of duty, making her able to influence the little ones by her example, Elizabeth writes that,

“it does not seem to have sharpened her intellect-: She looks at nothing from an intellectual point of view; and will never care for reading- teaching music, and domestic activity, especially about children will be her forte”.

However, while Elizabeth was disappointed by her eldest child’s lack of application to reading, she was proud of her daughter’s personality, she: “is patience, sweetness etc. personified with the little ones, docile and gentle to us, and altogether a treasure”. Marianne was also a very talented pianist and singer. Over the next ten years, she had piano lessons from Charles Hallé, the celebrated founder of the Hallé Orchestra.

Marianne was never going to be academically inclined, that role was left to her younger sister, but she did have talents that went beyond musical accomplishments, “she is one of the clearest people I know about practical things”, but arguments “never did seem to have much force for her in abstract things”. This became apparent in 1862 when she came home from Rome with the idea of becoming a Catholic, which horrified her parents, particularly William. As a result, she spent hours reading with her father. Marianne had never been a committed Unitarian, and even after her father’s best efforts she was still not convinced, but she did give up on the idea of becoming a Catholic. Eventually, after her marriage to her second cousin, Edward Thurstan Holland, in 1866, she became an Anglican.

Elizabeth never saw her eldest child married, the wedding took place at Cross Street Chapel the year after Elizabeth’s death, although the wedding had been planned for some time. Thurstan was the son of Edward and Sophia Holland of Dumbleton. He was two years younger than Marianne and struggling to make his own way as a young barrister and a lawyer. The marriage appears to have been a happy one. The couple had seven children although only three survived; two were deaf, hence the family’s interest in provision for the deaf.  It is from Marianne’s son, William Holland, that Elizabeth’s only descendants come. They are Sarah Prince and her brother Tim. Sarah has two girls and so the line continues.  Marianne is buried in the churchyard of St Mary Magdelene, Alfrick in Worcestershire.

You can see more about Elizabeth’s descendants and their Unitarian connections, as well as more about the principles of Unitarianism, in our new timeline and family tree which will be installed on the first floor once we re-open.

Part 2 of this series will be about Margaret Emily Gaskell (nicknamed Meta) Elizabeth’s second daughter.