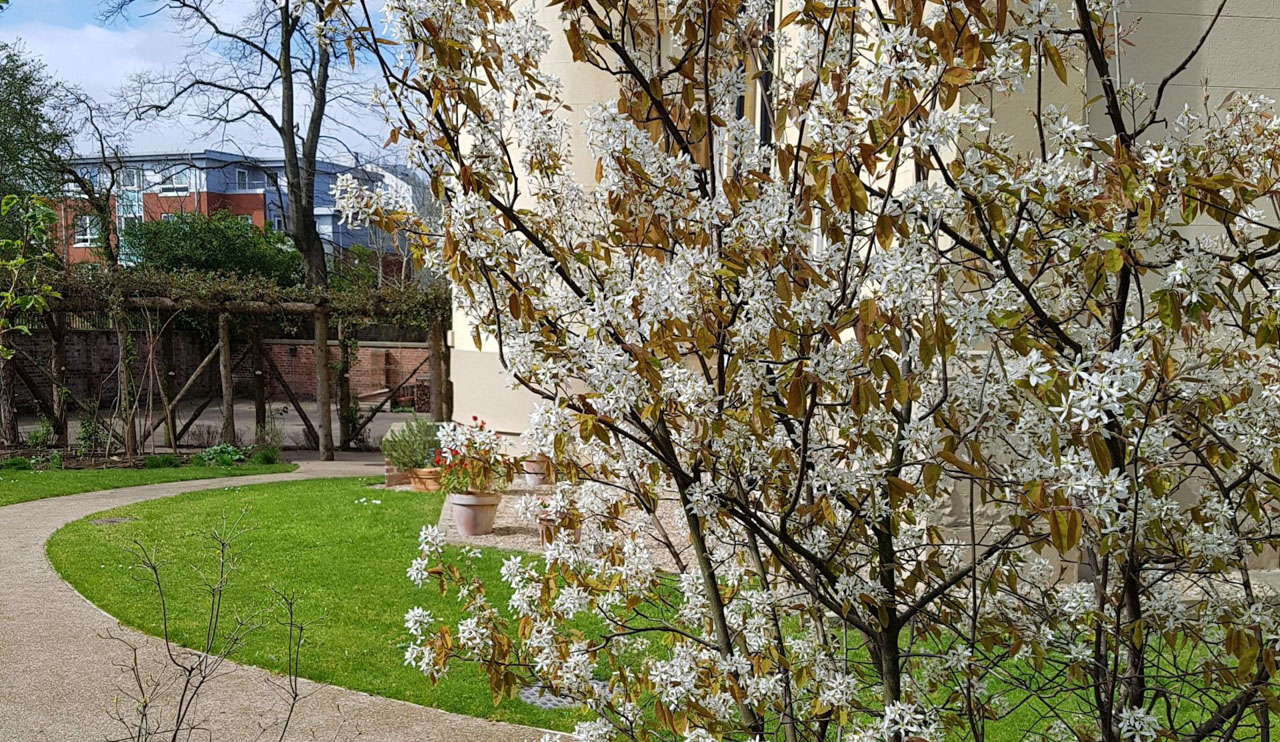 North and South in the Garden

The garden gates at Elizabeth Gaskell House are closed at the moment and the garden volunteers are unable to weed, plant, prune or mow. The plants carry on flowering, however. A volunteer whose daily permitted exercise makes possible the taking of photos of the garden has sent evidence that the yellow tulipa sylvestris, the primroses and the snakes-head fritillary are giving their annual show.

I am away from Manchester, though not as far away as Margaret Hale’s brother was in Cadiz, but I have been taking part in the on-line book-group discussion of North and South. Reading it again has reminded me of the influence that novel had in the choosing of plants in the garden. North and South is not alone in inspiring plant choice. Elizabeth Gaskell frequently described plants and gardens in her novels and short stories, and many plants have been chosen because of this or because of their links to people or places she knew or referred to . They are not labelled as such. There would be too many labels if we did.

One of the flower motifs that runs through North and South is the rose. It makes its first appearance in Chapter 3, “peeping (with the honeysuckle) round the corner” of the bow window. Later in that chapter the rose gathered by Mr Lennox for Margaret is given colour, “some velvety cramoisy roses that were above her reach”. Cramoisy was a new word to me. It means crimson. We were able to find a rose from the mid-ninteenth century called “cramoisi-superieur”. It is small and has never grown to such a height that it would be beyond reach; indeed it has never really flourished for us. But while we have it, we have our link to North and South. Here’s a photo of the flower.

The rose made Margaret “pleased and happy”, though she was not so happy at Henry Lennox’s later marriage proposal.

When she returns with Mr Bell to visit Helstone, a place of so much past happiness, the landlady of the inn they stay in provides a jug of water scented with musk roses for Margaret to wash her face (“there’s nothing so sweet as spring-water scented by a musk rose or two.”)

And then in the final scene of the novel, Mr Thornton, as part of his proposal, gives Margaret some dried roses he had picked at Helstone. I like to think they were cramoisy roses, that would round off the novel well, but Margaret recognises them by their deep indentations round the leaves, not their colour.

We have some fine roses in the garden, many whose names make links to Elizabeth Gaskell’s writings and life, so I’ll round off this blog with a photo of two of them and a primrose.