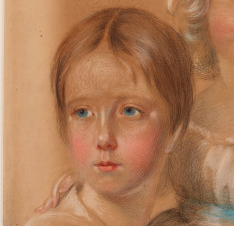 Untidy, dreamy, and absent; but so brim full of I don’t know what to call it…

Margaret Gaskell, known as Meta, was born two and a half years after Marianne. In her diary for December 1837, Elizabeth writes:

“Meta; 10 months old on the 5th of this month. She has a much more passionate temper than Marianne, perhaps much livelier. She is very bright and saucy when all goes right, and very affectionate.  The two dear little sisters are very fond of each other”.

Meta was much quicker than her sister and physically more robust. Out of all the daughters, it was Meta who had the intellectual capacity for study. Her interests were wide-ranging. She shared her father’s love of science and her mother’s love of literature as well as being a talented artist and musician. She was a child who seemed to succeed in whatever she attempted. When the Great Exhibition opened in 1851, Meta was 14 and enjoyed visiting with her father, an interest Elizabeth did not completely share: “I went 3 times, & should never care to go again; but then I‘m not scientific or mechanical. Meta and Wm went often, but not enough they say”.

That same year Meta was given a piece of music to learn, Mendelsohn’s, ‘The Rivulet’. She proceeded to transpose it into a minor key because: “I think the rivulet is wandering away and lost in the distance”. Elizabeth was most impressed! Meta was similarly successful with her artwork- some of her paintings are available to view at Elizabeth Gaskell’s House. The Victorian Art Critic, John Ruskin, advised her on her technique and she greatly admired his work; his Modern Painters formed part of her bedtime reading.  Even while on holiday Meta spent a great deal of time on her artwork and in 1860 she toyed with the idea of becoming a professional artist. In a long letter to her friend, Charles Eliot Norton, Elizabeth writes:

“When she was abroad, and drawing hard, she wished (for a time) to become a professional artist…I don’t know if she has fully given that up now; but I think she has. If she really and persistently wished it,…I think it right to yield, for I believe she has a great genius for it”.

However, Meta decided against a career in art, for despite her intellect and energy, she was devoted to her mother, who admits that to lose Meta to art would be “a silent trial to me”.

In a very intimate portrait of her daughter, Elizabeth reveals an engaging and flirtatious side to this studious second daughter which we seldom see. Meta had a love of dress and was constantly being chastised for her carelessness with clothing. In 1855, when Meta was 18, Elizabeth writes of her attraction to the military:

“We are deep in military affairs in one way or another, having a regular stationed here, who will know us, and will call… and ask us…to balls more than I like, as Miss Meta and one of the officers are a little too thick in the dancing line. 8 times in one evening being rather too strong and drawing down upon the young lady a parental rebuke”.

Perhaps his military standing was part of Meta’s attachment to Captain Hill of the Madras Engineers, a widower with two children, 20 years her senior, whom she met in 1857 on their voyage to Rome. The couple became engaged later that year and arrangements were in preparation for a wedding in Alexandria, Egypt. However, news reached Meta about the captains “untruthfulness to a small degree in regard to money”. He refused to reply to her letters with any assurances, piqued by his fiancé’s lack of trust. Ultimately, she broke off the engagement and remained single for the rest of her life. Elizabeth writes to Charles Eliot Norton in May 1858: “Meta is far from well, – more from deep disappointment in character, I think than from wounded affection; for she says ‘he is not in the least what she fancied he was’”.

During the cotton famine of the 1860s, Meta, along with her sister Marianne, devoted a great deal of time to helping the poor. Meta exhausted herself helping in the Manchester Sewing Schools for she had a deep sensitivity to people’s suffering. The effects of this time on her health were still present before her mother’s death in 1865.

After Elizabeth’s death, Meta acted as her literary executor as well as continuing her involvement in charitable works. Her support of education for all is reflected in the fact that she was one of the founders and a Governor of the Manchester High School for Girls; and a benefactor of the Manchester Social Club and the Sick Poor and Private Nursing Institution, along with several other institutions. In the early 20th century she presented a recreation ground, now Swinton Grove Park, to the city, and in 1909 founded a Nursing Home in Swinton Grove as a memorial to her sister Julia who had died the previous year.

Meta was also a keen supporter of the arts. She was a subscriber to the Royal Manchester College of Music, and the report of her funeral in the Manchester Guardian, lists Dr Brodsky (RMCM), Mr Albert Nicholson (Gentlemen’s Concert Society) and Mr Gustav Behrens (Hallé Concerts Society) as attendees. The Behrens family were also personal friends. In addition, Meta supported the newly created University of Manchester and gave pictures and objects of art to the Whitworth Gallery and Manchester Art Gallery. She was a true philanthropist! Henry James describes her as a “most pleasing, amiable and sympathetic woman”.

When she died in November 1913, the family home at 84 Plymouth Grove was sold and its contents were auctioned. Meta is buried with her mother, father and sister Julia at Brooke Street Chapel, Knutsford.