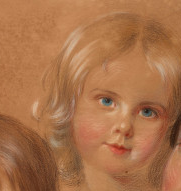 Florence has no talents under the sun; and is very nervous and anxious…

Florence, or Flossy as she was affectionately called, was born in October 1842,  just after the family’s move from 14 Dover Street to 121 Upper Rumford Street, a larger house further from the industrial centre of Manchester and nearer to the open the fields which the family could see from their windows.  Florence was, despite the comments made by her mother about a lack of talent, a sociable girl who excelled in household management.  Perhaps the lack of talent Elizabeth talks about is an academic or artistic talent for Flossy clearly had other very attractive and useful practical attributes.

By the time she was four, Flossy was becoming a popular and sociable child who loved company, often crying to stay with others when the time came to return home. In 1846 Elizabeth writes:

Similarly, it is Flossy who is involved in the kite flying activities with her father, a time when we are given a rare glimpse of William enjoying a relaxed moment as a family man:

“Papa has made her two kites. The first went up into some trees where it stuck but the last is still to be seen and flown when the wind bears. She and Papa are very happy together flying it sometimes.”

Flossy also enjoyed reading. She is delighted when she is sent a parcel of letters and books from Mrs Lalor in London. Elizabeth notes, however, that some of the pleasure arises from the fact that she was the only one to receive letters.

In 1859 Flossy was sent to school at Heathfield in Knutsford, now Heathfield Square. It was the home of Rev. Henry Green of Brook St. Chapel and the school for young women was run by Henry Green’s daughters. The school had opened in 1857 after Rev. Green had closed his school for boys on the same site. Elizabeth writes to Charles Eliot Norton: “Flossy is to go to school, at dear old Knutsford, with some Miss Greens, (the daughters of the Unitarian Minister there,) who are like sisters to our elder girls”. The sisters were Mary Ellen and Emily. As well as teaching Florence Gaskell, these two women tutored their youngest sister, Isabella Green, born in 1841 and of a similar age to Flossy. Subsequently, the two girls became firm friends until Florence’s death in 1881. Julia Gaskell followed her sister to school in Knutsford in 1860.

Florence grew up to become quite a beauty. After a visit to the Gaskell’s at Plymouth Grove in 1858 Fanny Wedgewood wrote to her sister Snow “…what a little beauty Flossy is.”

Florence was the first of Elizabeth’s daughters to marry. In the autumn of 1862, she went to stay with Judge Crompton in London; and the following spring she became engaged to the Judge’s eldest son Charles, ten years her senior. Elizabeth writes to Charles Eliot Norton: “…she engaged herself to him- (in passing through London to join me in Paris before going to Italy).”

Charley Crompton was a lawyer and it appears from Elizabeth’s letters that he had her seal of approval as a husband for Flossy:

“…we had just been introduced to him and knew the pleasant straightforward look on his face (some people call him handsome) …But his goodness is what gives me the fullest feeling of confidence in him.”

However, Elizabeth confesses “I have had to take a good while to reconcile myself to the parting from this dear child, who still seems so much a child.”

The couple were married by William Gaskell at Brooke Street Chapel, Knutsford in the first week of September 1863, with only the two families in attendance. After a honeymoon in Scotland, they took up residence in London. However, throughout her later letters, Elizabeth gives the impression that Flossy missed home and in consequence, Charles Crompton took advantage of employment on the Northern Circuit to bring his wife back to the family home in Plymouth Grove. In 1864 when Marianne visits her sister in London Elizabeth writes to Charles Eliot Norton:

“Dear little Flossy is curiously unchanged by marriage in many ways; takes her place as third daughter at home, runs errands &c. but is a little bit tyrannical over her sweet-tempered husband in her own house.”

It was Charles Crompton who was with Flossy, Meta, Julia and Elizabeth at the house she was buying Holybourne, Hampshire, when Elizabeth collapsed and died of heart failure on November 12, 1865. Charles was there in his professional capacity as a lawyer as well as in a personal capacity as Flossy’s husband.

The couple were married for 18 years until Florence died at the age of 39 from a dose of chloral hydrate, a sleeping draft. Records state that she had gone to bed with a headache-she never woke up. There was no evidence to suggest suicide, possibly an accidental overdose. An article by Alan Shelston in the Gaskell Society Newsletter tells us that the word ‘accidental’ appears on the death certificate and it was well known that chloral hydrate was both addictive and dangerous. Florence and Charles had no children and she was buried with her husband’s family in St Mary’s churchyard, Willesden.