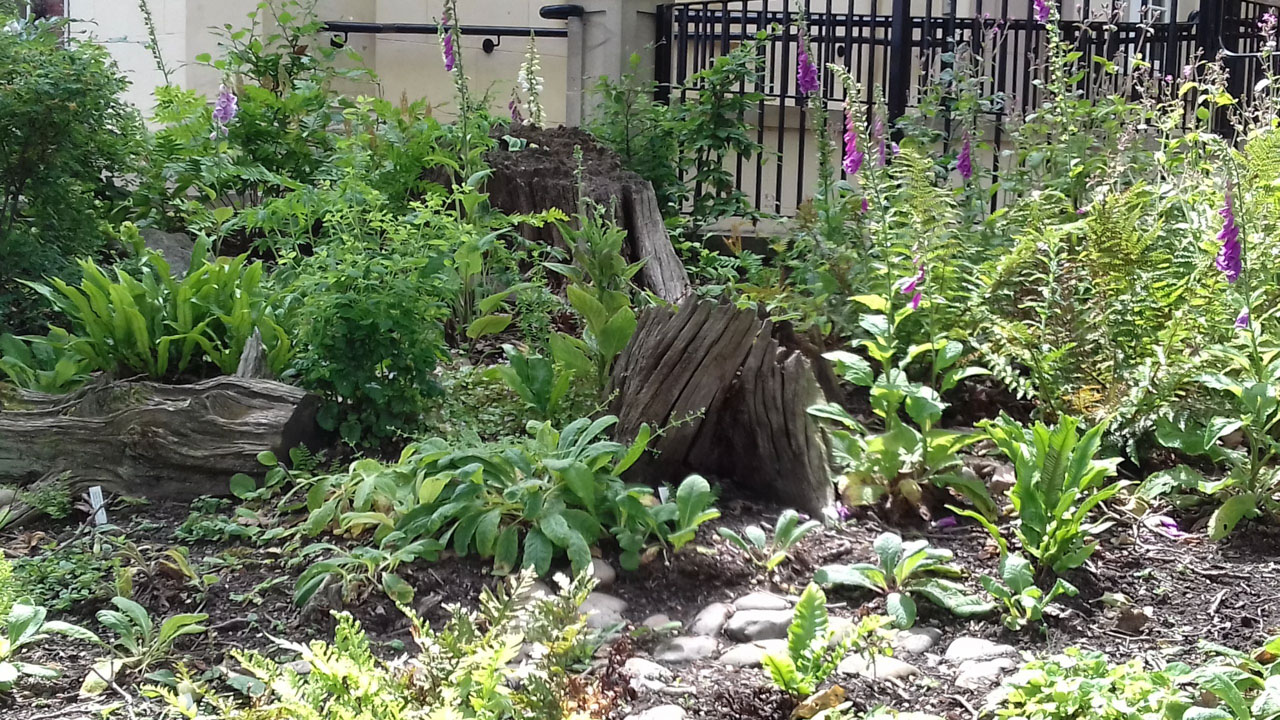 North and South and the Fern Bed

The garden gates remain locked, as they will be for some weeks yet, I suspect. But it does give time to explore another way in which North and South has influenced the planting in the garden. Last week I identified roses as a motif in the novel and I think ferns, or maybe more accurately, green, sunlit woodland, can also be seen as a thread of happiness and fond memories throughout the novel.

In Chapter 2 Margaret returns from London to Helstone , where “the fern below (the forest trees) caught all the slanting sunbeams”. She has fond memories of walking with her father over the ferns. The garden at Elizabeth Gaskell’s House is a city garden and we would be unhappy if our visitors trod over the ferns but we do now and again have a hint of sunlit woodland.

The photo above shows a fortuitous “slanting sunbeam” falling, as at Helstone, across the fern bed, and we have consciously tried, when planting that bed, to chose plants that have some link to Elizabeth Gaskell’s writings or life. For example we have planted Osmunda Regalis (Royal fern) because Leo Grindon, a contemporary of Mrs Gaskell and a lecturer on botany at Manchester School of Medicine, wrote that these were “abundant in Knutsford”. In the photo below it is seen in front of Scotch burnet rose (Rosa pimpinellifolia) as a reference to William Barton’s period of study in Glasgow but also because I recollect that it is fragrant and there are many references to Mrs Gaskell’s love of flower scent.

We also planted Polypodium australe cambricum “Richard Kayse” (The Welsh fern) as a reference to the honeymoon that Elizabeth and William Gaskell took in Wales in 1832. [Above right]

So the bed is planted with ferns that have links to happy memories. I like to see a link with Margaret’s fond memories of Helstone which she shares with Bessie,

“there are billowy ferns-whole stretches of fern; some in the green shadow; some with long streaks of golden sunlight lying on them.”

Margaret returns with Mr Bell to Helstone for what is a bitter sweet visit. The place is still full of fond memories but she comes to accept the need for change. And in a smaller way we have changed the planting in the fern bed, moving plants to positions where they will catch more rain and adding plants to give variety. For a while I allowed self-sown wild flowers to grow but had planned this year to restrict them more so the bed had a more coherent, tidy appearance. Moving, after consultation with my fellow gardeners, to a more planned approach, like Mr Thornton moving from his free-market individualism of the early chapters of North and South, to the more cooperative thinking in the last chapter but one.