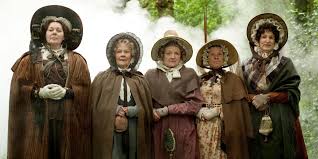 Over the last few months, a team of our lovely volunteers has been cataloguing all the books we have in the House, and particularly those in William’s study. Now this rather huge job is done, they have been identifying the gaps in our collection , and also what we should buy to fill them.

To identify the gaps, the first question they’ve asked is ‘What books do we think the Gaskells would have had on their shelves?’ The answer comes from a whole variety of sources including the auction list prepared when the contents of the house were sold after Meta’s death; the list of books William Gaskell borrowed from the Portico Library; the books Elizabeth Gaskell mentions in her letters; and the books she discusses and quotes from in her own novels.

In our Cranford year. I’m particularly interested in three books we’ve recently acquired and all of which are mentioned in Cranford. And how much are we looking forward to welcoming you back to the house in May when you’ll be able to see the books for yourself!

Let’s start with rather a mouthful of a title, Letters on the Improvement of the Mind addressed to a Young Lady by Mrs Chapone. This conduct manual, written by Hester Chapone, was published in 1773. It collects together a number of letters written to her niece Jane Mulso which explore how young women should educate themselves, recommending that they should be disciplined and methodical in their studies. Hester Chapone particularly encourages the study of history as most likely to entertain and improve at the same time…, to form and strengthen your judgement. It’s likely that the book seemed rather old fashioned when Elizabeth Gaskell was writing in the 1850s, though she evidently knew it well even as she pokes gentle fun at it as in Old Letters , chapter 5 of Cranford, where Miss Matty is reflecting on her sister’s letters : Deborah’s letters were so very superior! (…) It was a long time since she had read Mrs Chapone, but she knew she used to think that Deborah could have said the same things quite as well.

The book crops up again in My Lady Ludlow. This is from chapter 2: Very frequently one of us would be summoned to my lady to read aloud to her, as she sat in her withdrawing-room, some improving book. It was generally Mr Addison’s Spectator; but one year I remember, we had to read Sturm’s Reflections, translated from a German book Mrs Medlicott recommended. Mr Sturm told us what to think about for every day of the year; and very dull it was; but I believe Queen Charlotte had liked the book very much, and the thought of her royal approbation kept my lady awake during the reading. Mrs. Chapone’s Letters and Dr Gregory’s Advice to Young Ladies composed the rest of our library for week-day reading.

The book was very popular and by 1829 had been reprinted nearly thirty times. While its tone might now seem moralising: How lamentable it is that so few hearts should feel the pleasures of real piety and If you are good and seek friendship only among the good, I trust you will be happy, Mary Wollstonecraft singled it out as one of the few examples of the self improvement genre deserving of praise.

Let’s move forward now to Senor Brunoni, chapter 9 of Cranford, where the Senor spoke such pretty broken English, I could not help thinking of Thaddeus of Warsaw, and The Hungarian Brothers, and Santo Sebastiani.

The talented and prolific Porter sisters were among the most popular writers of the early nineteenth century. Jane Porter, born in 1776, wrote the beguiling historical romance that is Thaddeus of Warsaw, and her younger sister, Anna Maria, The Hungarian Brothers, a stirring romance set against the background of the French Revolution. Both of the books enjoyed considerable commercial success, going into several editions, but sadly the sisters derived little financial benefit as most of the profits from their sales were swallowed up by their brothers debts.

The family moved to Edinburgh when the sisters were young and had a house close to Walter Scott who often visited and told them stories. Anna Maria was only 52 when she died, but Jane lived to be 74. When she lived in London, she was very friendly with the writer. Anna Laetitia Barbauld who is also represented on our bookshelves.

Writing to James Crossley in February 1854, Elizabeth Gaskell unfavourably compares the work of a Mrs Granville to that of the Porter sisters, who she evidently admired: About 2 years ago when I was in Knutsford my attention was directed to an old lady in very reduced circumstances, bearing the name of Granville. (…) She had been a great friend of the Miss Porters ( Jane & Anna Maria) in girlhood; and it was perhaps owing to their example that she had taken up the business of writing novels (at 10 £ each) for the Minerva Press. I saw some of her tales, which were harmless enough, a weak dilution of Miss Porters in style and plot.

Do look out for these books when you next visit the House!

You may be interested in more stories about the books in the house:

Daily Devotions for the Closet https://elizabethgaskellhouse.co.uk/daily-devotions-for-the-closet/

Needle in a haystack? https://elizabethgaskellhouse.co.uk/needle-in-a-haystack/