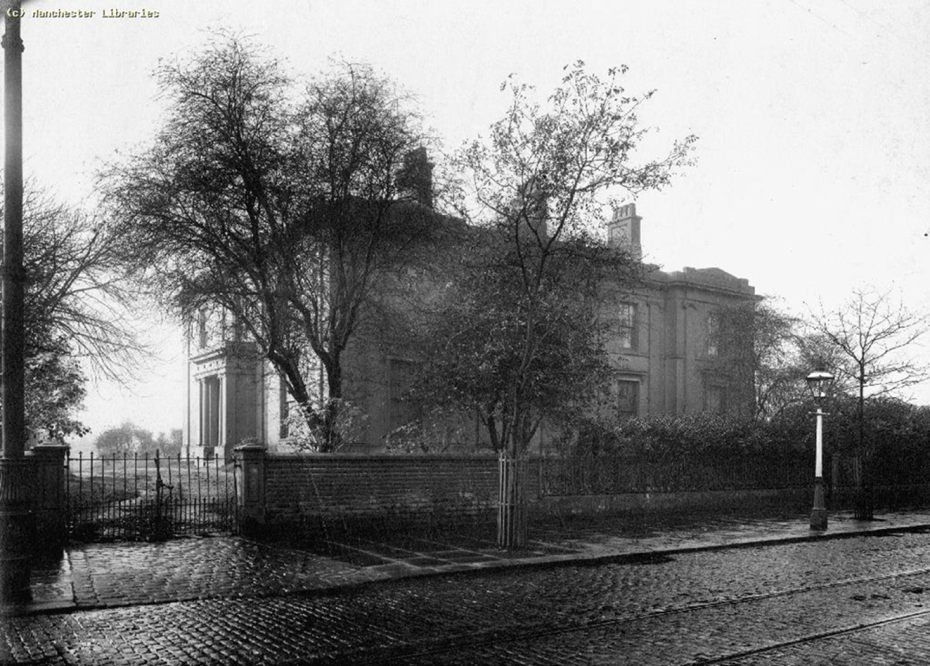 After moving into a new house, it is always useful to know your neighbours. I am sure Elizabeth would have already known many of her new neighbours in Plymouth Grove as they were mainly Manchester merchants, manufacturers and local dignitaries, some possibly even part of her husband’s congregation at Cross Street.  So let’s take a trip down Plymouth Grove in 1850 and see what stories Elizabeth’s neighbours have to tell.

Starting with figure 1 on the map which is not exactly a neighbour but  nonetheless interesting, is a site rented to Rev. Edward Birch of St. Saviour’s Church as a burial ground. There is no evidence of graves there now, the only remaining gravestones are displayed  on the site of the church which was demolished 1964, rebuilt and demolished again in 1974 to make way for a ring road that was never built. The position is now marked by a cross and a large number of surviving gravestones (fig. 1a).

The first large house of note after the burial ground was owned by Matthew Curtis (Fig. 2). Curtis moved from Grosvenor Street in 1841 and initially rented 20, later 26 Plymouth Grove,  from James Ackers. Curtis was a wire-card manufacturer and a machine-maker, later becoming an owner of Curtis, Parr and Walton and the machine makers Parr, Curtis and Madely. In 1850 he became a member of the Institution of Mechanical Engineers, leaving Plymouth Grove nine years later for Thornfield in Heaton Mersey. He kept the house in Plymouth Grove as a rental property.

Curtis was a Manchester council member for many years and served three terms as the city’s mayor in 1860/61, 1875/76 and 1886/87. In 1876, during his second term, he placed the copper ball on the tower of the newly constructed Town Hall in Albert Square. The building was opened the following year. Curtis died in 1887 while still in office.

Gray was another wealthy Manchester trader who owned his own property. Gray was a grocer with a business at 47 Market Street, perhaps Elizabeth shopped there.

Elizabeth’s nearest neighbours were Miss Ellen Carr and Lewis Williams living at 2 and 4 Swinton Grove. Ellen Carr’s house was directly behind Elizabeth’s dining room and was previously occupied by Alexander Butler Rowley (See previous blog). Ellen moved from Upper Brook Street around 1850 and during the 1860s she was joined by her elder brother Edward and sister Isabella who was thirty-two years her junior. Like the Gaskell’s, the Carrs were some of Plymouth Grove’s longest standing tenants; the house was still registered in Isabella’s name in 1892.

Lewis Williams, their neighbour, took up residence at 4, Swinton Grove on its completion in 1838. These houses were smaller than Elizabeth’s and attracted lower rents- between £90 and £100. Williams was a cotton spinner, owning Lewis Williams and Son, Tame Street Mill, Great Ancoats which had 80,000 spindles and Upton Street Mill, off London Road. His son, Edward Morgan Williams was living at 4 Swinton Grove in 1892.

Next came two properties on what is now Swinton Grove Park. The one nearest Elizabeth’s (48 Plymouth Grove) was rented by a merchant of German /Jewish extraction who became a Unitarian. In 1833 Ernest served on the jury that convicted three men, Meyer, Kemper and Bagdansky of robbing the house of Martin Schunck, a wealthy merchant and trustee of Cross Street Unitarian Chapel where William Gaskell was then junior minister. Bill Williams writes that what made an impact on the public was:

the great many foreign gentlemen who attended the court, and the six in particular who composed half the jury, all German merchants, at least one, Ernest Reuss of Jewish extraction (p. 75).

Kemper and Meyer were sentenced to two years hard labour and Bagdansky to one.

Manchester has long been a great cosmopolitan city. Over the years, Reuss, like his fellow Unitarians, was a great philanthropist:

He was Vice President of the Deaf and Dumb school as well as being Chairman of the house stewards at that establishment. He was also actively involved in many charitable institutions such as Manchester Royal Infirmary, Cheadle Royal Hospital and Asylum, the Rusholme Public Hall and Library, the Manchester and Salford Sanitary Association and the Ragged School. (Manchester Courier 4 Nov 1865)

Between 1852 and 1853 he left Plymouth Grove for Victoria Villa, in Victoria Park.

While Reuss is not mentioned in Elizabeth’s letters, Wainwright Bellhouse, his neighbour, is. Wainwright was the son of David Bellhouse, a builder and a founder member of the Portico Library where William served as Chair from 1848 until his death. David built Mynshull Mill on the River Medlock near London Road Station in 1806 and his sons James and Wainwright ran the business. The diverting of the River Medlock in 1857 caused the Bellhouse brothers to sue Manchester Corporation for damage to mills, goods in progress and property and they won £4, 500. Interestingly there was also a strike at the mill in 1854 just as Elizabeth was writing North and South but whether this was the model for the strike scene in her story is unclear.

Although the connection with North and South might be tenuous, there were other clear connections between the Gaskells and Bellhouses, one being that their three daughters were of a similar age to Elizabeth’s eldest girls. Another concerned Elizabeth’s farming interests. David Bellhouse had bought farmlands in Grappenhall, Cheshire, not far from where William’s brother Robert farmed in Latchford.  After David and his wife Mary died in 1851, Elizabeth writes to Anne Shaen: ‘The Bellhouses will sell us their cow things, milking stool, cans, &c, &c. &c’ (p. 170).

That same year Wainwright’s own wife, Sarah died and Elizabeth notes this event in a letter to Marianne dated 10 March 1851.  Mrs Bellhouse was the granddaughter of the Manchester actress Sarah Ward. Eight years later, after Wainwright had left Plymouth Grove, Elizabeth  is visiting the Behrens for the Cheshire Hunt, and writes: ‘not very many gentlemen, Sir Philip Egerton, Lord Grosvenor, Mr Wainwright Bellhouse, a Captain Starkey …’ (L. p. 545). Wainwright also enjoyed the cultural life of the city; he sang tenor at the Manchester Glee Club and was an active member of the Athenaeum.

Henry Moses Salomon lived at 54 Plymouth Grove, next door but one to Wainwright Bellhouse. Salomons had lived there since moving his cotton business from London in 1837. In Manchester he entered into a partnership with the young Jewish Italian, Giuseppe Robino di Moro, trading as Salomons and Moro. Salomons reinforced the Jewish cotton dynasty in Manchester by marrying Priscilla Lucas, sister to Anna Behrens and the cotton manufacturer Philip Lucas of Lucas and Micholls (see previous blog).

However, it is Henry’s son, Edward who made his mark on Manchester as an architect. He trained at the Manchester School of Art and Design and was a contemporary of other notable figures- Thomas Worthington and Alfred Waterhouse. Salomons helped found and also designed the Manchester Reform Synagogue (1857-58), the Manchester Jews School (1868-69), and the Spanish and Portuguese Synagogue (1873-74), now the Jewish Museum, on Cheetham Hill Road.

The Railton’s home was tucked away on a triangular plot just behind Henry Salomon and Richard Smith. Joseph was a commission agent and merchant with offices at 16, Blackfriars. In 1845 his household was involved in a strange, sad tale which, according to The Manchester Courier, ‘caused a good deal of excitement’.  Joseph found that Mary Thomas, one of his servants had given birth to a baby and hidden its body in a barrel in the cellar. The baby had died from a haemorrhage and there was a considerable wound to its throat, but because of the nature of the birth the jury was unable to conclude that the child had been ‘fully born’, therefore no charge of murder was brought.  What this story reveals is the difficulties faced by female servants. They were often not allowed to marry and if they had a child out of wedlock were usually dismissed. Two years later, Elizabeth’s cook, Anne, found herself in the same predicament, but she received help and support from her mistress, although she had to leave her position.

Joseph Railton died in March 1851 but Sarah continued to live at 56, Plymouth Grove until her death in 1864, the year before Elizabeth’s.

Richard Coates was a land agent and cotton dealer living at 93 Plymouth Grove, on the opposite side to Elizabeth. In April 1852 she writes: ‘Mr Coates is worrying us about our naughty poultry, which will go up and down where they have no business to’.

That same year an advert appeared in the Manchester papers offering William Occleshaw’s property portfolio for sale in five lots, Richard Coates is given as one of three people who could supply ‘more details’ on the sale which was ultimately unsuccessful. Coates’ name appears on many auction sales notices during this period, and as a land agent it is probably to him that Elizabeth applied in connection with the poor drains: ‘Mr Coates says that inside drains are the landlord’s affair; outside tenants which seems to be reversing the natural order of things’ (p. 941).

In 1850, the year Elizabeth moved into 42 Plymouth Grove, Richard Coates suffered a tragic loss. His son, Alfred, was engaged to John Morris’ daughter; Morris was an attorney with rooms in Princess Street, and a near neighbour of Coates in Plymouth Gove (fig. 10).  Morris, like Elizabeth, loved Silverdale, a picturesque village to the north of Lancaster and had a property there Know Hill Lodge. In 1850 Alfred had been invited to stay with the Morris family and during his visit he set out with nine others to cross Morecombe Bay to Grange. On their return trip, the party became separated and Alfred, along with four other men were caught up in the dangerous tides and drowned.  These accidents were not uncommon and three years earlier, Elizabeth had written of such an event in ‘The Sexton’s Hero’, published in Howitt’s Journal.

Ivie Mackie lived at Ivy House, 60 Plymouth Grove and served three terms as mayor of Manchester between 1857 and 1860; he was followed by Matthew Curtis. Mackie is listed in the 1850 directory as a wines and spirits merchant, but in 1860 he became a partner in Mackie, Davidson and Gladstone, a private country bank. The Gladstone was his wife’s brother –in-law who was related to W E Gladstone.

In 1858, William was invited to a prestigious dinner at Ivy House to meet William M. James QC, vice Chancellor of Lancashire. The guest list included William’s friend from university, Edward Potter and his son Rupert who was Beatrix Potter’s father. William often went on holidays to Scotland with the Potter family.

In 1870, Ivy House was opened as Hulme Hall and later in the 20th century it was a Church Army Welfare Shelter.

So ends this tour of Elizabeth’s neighbours, most of whom were wealthy and influential members of the Manchester community and all of whom have stories to tell.

If you liked this blog you might also like this blog;
And yes we’ve got a house

« And We’ve Got a House. Yes! We really have.’
To Buy or not to Buy that is the Question »