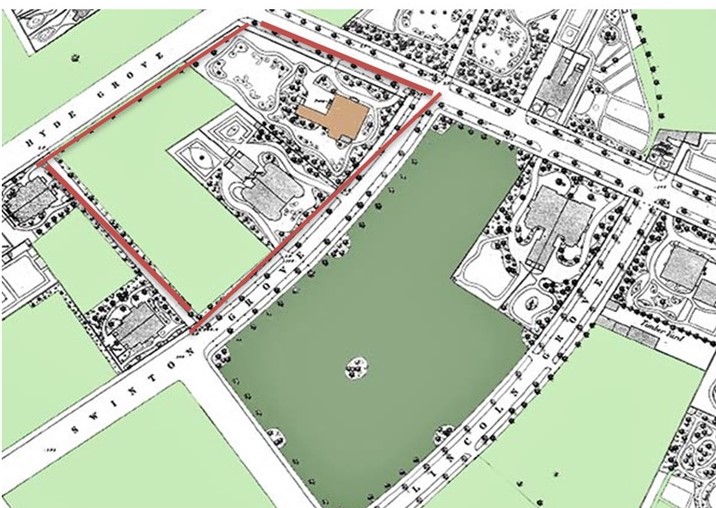 To Buy or not to Buy that is the Question

Volunteers at Elizabeth Gaskell’s House are often asked if Elizabeth ever bought 84 Plymouth Grove. The answer is definitely no, but her daughters, Meta and Julia, did purchase the property in 1900, many years after both their parents had died. So let us trace the history of the house and its sale at the end of the nineteenth century.

By 1850, William Occleshaw, the owner of a portfolio of houses on Plymouth Grove which included the Gaskell’s house, had died and the rents were therefore all paid to his executors. In May 1852 the executors placed an advertisement in the Manchester papers offering all the land and dwelling houses in Occleshaw’s possession for sale: ‘for the purpose of carrying into effect the family arrangements contemplated by his will’.  Richard Coates, one of Elizabeth’s neighbours, was the land agent for this sale for which the properties were organised into five lots.  The Gaskell’s house, along with the two houses on Swinton Grove and the spare land which we believe she rented to pursue her farming interests, comprised Lot 4.

The advertisement makes fascinating reading, informing prospective buyers of the superior quality of the properties : ‘the entertaining rooms are lofty and spacious, fitted up with marble chimneypieces and ornamental decorating’, one of the original marble chimney pieces has been carefully restored and can now be seen in the Drawing Room at Elizabeth Gaskell’s House.  In addition, these houses were fitted with ‘water closets, kitchens, sculleries and out-offices’, the use of plurals here suggests more than one WC and numerous rooms below stairs.

This advertisement also stresses the desirability of this area which is: ‘likely to preserve its rural and agreeable appearance for many years to come’.  It is easy to see why Elizabeth was attracted to this handsome villa in an area which had the rural quality she had come to love as a child in Knutsford. However,  the newspaper’s prediction that the area would maintain such an appearance for ‘many years to come’ was optimistic in the extreme, especially considering the development which was already taking place to the north of Plymouth Grove. By 1853 many of Elizabeth’s neighbours had begun to move further out of Manchester, relocating further out along Oxford Road or into Cheshire-Alderley Edge, then named Chorley, was a popular location. One prime example of this development is the villa opposite William’s study which by 1866 had been demolished and replaced by six terraced houses.  Whatever the reason, the 1852 sale was unsuccessful and rents were still paid to Occleshaw’s executors until 1899 when the same properties were re-advertised.

It was in the late November of 1899 that another advertisement for William Occleshaw’s portfolio of land and properties appeared in the Manchester papers, this time there were eight lots with the plot containing the Gaskell’s house comprising Lot 1. Moreover, the number of dwellings for sale in this lot had increased from three to seven as it now included the two houses further along Swinton Grove (see blue arrow) and the two on Swinton Avenue (see red arrow).

In the first instant, lots 1-8 were offered for sale as one item, to be separated later if no sale could be secured.  We know Meta and Julia Gaskell bought Lot 1, and in 1909 after her sister’s death, Meta turned numbers 6 and 8 Swinton Grove, marked with the blue arrow, into a Nursing Home in Julia’s memory. It is listed in the census for 1911 as the Memorial Nursing Home.  The census records six nurses and eleven patients, four were male and seven female, along with three servants. The matron lived at 341 Oxford Road.

While the mystery of the house sale has now been solved, there still remains some doubt as to the purchase of Swinton Grove Park, formerly known as the Gaskell Recreation Ground. Alice Chadwick, Elizabeth’s first biographer, maintained that Meta and Julia merely contributed towards the purchase of this land:

At the opposite corner of Swinton Grove is a plot of ground known as The Gaskell Recreation Ground, which was bought by the Manchester Corporation in 1900, Mrs Gaskell’s daughters contributing £500.

Others believed that the land was bought outright by Elizabeth’s two daughters, and what has added to this speculation is the fact that Alice Chadwick’s biography was known to be unreliable in places.  However, this mystery can be solved by again referring to the local newspapers.  A report in the Manchester Courier dated 03 May, 1900 states that the City Council Parks Committee were willing to pay £3,500 for the plot marked as Lot 7. Dr Lloyd Roberts had negotiated a £500 reduction in the original asking price of £4,500 but there was still a £500 shortfall:

… but the Misses Gaskell have built a golden bridge which unites both parties and places a ‘lung’ at the service of 40,000 people who dwell within half a mile of it. The offer of £500 to complete the purchase was made in such a gracious, kindly manner as enhances the value of the gift , and will add to the gratitude and pride with which Manchester regards a name so justly honoured in literary annals.

In the following day’s newspaper a letter to the editor by a correspondent appropriately named Cranford, suggests:

[T]hat the said open space be called ‘Gaskell Recreation Ground’ , in order to perpetuate the name of the lady who was an ornament to Manchester, and her daughters, through whose munificence and public spirit the city will be enabled to acquire a new lung.

From the above photograph it is clear that in 1900, when the land was purchased, the park area was just rough ground. The two houses in the background behind the high wall had been the homes of Ernest Reuss and Wainwright Bellhouse in the 1850s (see the previous blog). Why this land had remained unused throughout such an extensive period of development remains a mystery. Clearly it had always been considered as a building plot since the house numberings consistently reflected the potential for at least one more house between the Gaskell’s numbered 42, and Ernest Reuss’ numbered 46. By the 1901 census the numbering had become even more random; The Gaskell’s house was 84 with the two houses on what was to become Swinton Grove Park being numbered 120 and 122. I suggest that the reason for this lies in the call for more housing and the building of smaller terraced properties, thus more houses could be squeezed into any available space.  That is a story we all know very well!

It was another thirteen years before a Gaskell ceased to live at 84, Plymouth Grove, Meta died in November 1913 and the house was subsequently sold. We will consider what happened next in the concluding part of this series.

If you enjoyed this blog you might like;
Meet the Neighbours
And We’ve Got a House. Yes! We really have.’

« Meet the Neighbours
Needle in a Haystack? »