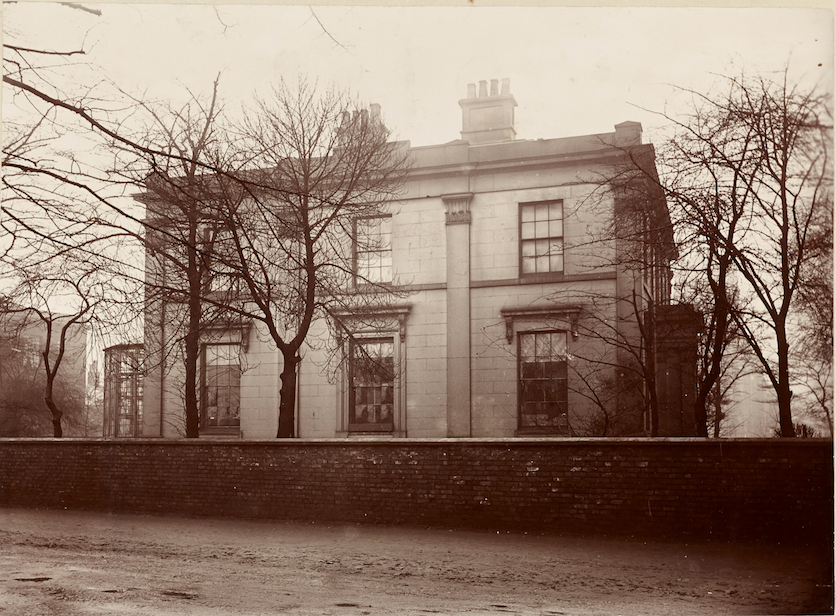 And We’ve Got a House. Yes! We really have.’

So writes Elizabeth in April 1850 about 42 Plymouth Grove, the house that was to become the Gaskell’s family home for the next 63 years.  Over the years, our visitors have shown a great deal of interest in this building and the development of the Manchester suburbs. Attempts have previously been made to date the building, with a consensus settling on a period between 1837 and 1840. However, using the Manchester Rate Books which give a year by year account of properties and their owner/occupiers, it is possible to make a more accurate calculation. Furthermore, these documents give a clear picture of the development of Manchester as an industrial city.

In the 19th century most people rented houses and a wealthy landlord might hold a large number of properties in his portfolio. Such was the case with William Occleshaw, a lead manufacturer with leasehold and freehold  manufacturing properties  in Lees-street, Whittle’s Croft, Junction-street, Mather-street, and Aqueduct-street, in Piccadilly, central Manchester. When Elizabeth Gaskell moved into 42, Plymouth Grove in 1850, Occleshaw’s estate ( he died in 1848) owned  25 properties in Plymouth Grove, including what was later to become the Elizabeth Gaskell’s House.  Plymouth Grove, named Plymouth Street in some early rate books, began its development as a suburban oasis away from the city smoke in the very early part of the 19th Century. The earliest rate book I can locate is 1822 when there were 24 houses in Plymouth Grove, all of which were occupied, thereby indicating an earlier build. Of these, William Occleshaw owned six.

As a volunteer at the Elizabeth Gaskell’s House, I became intrigued as to when this rather stately Victorian Villa which Elizabeth began renting in 1850 was actually built, who had previously lived there and who were her near neighbours.  Thus began my search. It took a while to trace the exact year when building commenced, fortunately for me many residents  remained in the same property for  years, thus giving me anchor points when studying evidence from Rate Books, Trade Directories and the census-sadly the 1851 census has been water damaged and is virtually illegible.  John Allen, who lived at the Lincoln Grove corner of what is now Swinton Grove Park (see Map), was a constant over many years as was Henry Solomons, Luke Gray , and later Lewis Williams. It was through them that I could eventually locate the building of the Elizabeth Gaskell’s House which was next door but one to John Allen and next to Luke Gray, until Chatsworth Terrace was finished in 1840. As you can see from figure 1, in 1838 the property which Elizabeth later rented was owned by William Occleshaw and attracted a rent of £150, the figure she paid on acceptance of the tenancy.

The previous year this entry has NEW written into the space between Joseph Pope/John Allen and Luke Gray, suggesting that during 1837 the House was being constructed but was not ready for a tenant. Two years later, in 1839, 42 Plymouth Grove was occupied by Frederick Caruthers, a Manchester distiller who stayed there until 1842/3 when Henry Micholls took the house.

There is a theory that Elizabeth’s house had been occupied previously by Alexander Butler Rowley, listed in the 1841 Trade Directory as an attorney and notary with an office on Princess Street. This is incorrect.  Rowley lived at 2, Swinton Grove, next door to Lewis Williams and, in 1840, next to Frederick Carruthers. Number 2, Swinton Grove was the end house nearest to Elizabeth and William’s dining room; it is now apartments (Cranford Court).  Even if the history of Elizabeth’s house had not been traced through its positioning in the rate books, it can be proved that Rowley never occupied 42 Plymouth Grove by tracing its occupants through the rate books.

In 1865 Elizabeth writes about a previous occupant, Henry Micholls, who complained about the drains when he was living at 42 Plymouth Grove. In fact, she suggests that the drains were instrumental in his decision to leave in 1849; she omits to mention that he had bought a house and land on Oxford Street (Oxford Road).  Micholls began his tenancy of 42 Plymouth Grove in 1843 following the departure of the previous tenant, Frederick Carruthers.  Rowley only had a short tenancy on his property and, as you can see from figure 2, he lived next door to Carruthers.  It is also worth noting that Rowley is listed on the 1841 census as living in Swinton Grove.

Micholls, however, is interesting in his own right. It is very likely that he knew Elizabeth and William socially as the Gaskells were friendly with the Behrens and Henry Micholls not only married Frederica Behrens, their eldest daughter, but he was also in business with Mrs Behrens’ brother, Philip Lucas – this was dynasty building at its best!  The Behrens had lived at Longsight Abbey on the corner of Plymouth Grove and what is now Plymouth Grove West since 1831 moving ten years later to Stanley Grove just off Oxford Street.

For those who are regular visitors to the Elizabeth Gaskell’s House might remember a trowel in the display case in the Morning Room. This was part of an object swap with Manchester Jewish Museum and had been used by Henry’s brother Horatio to lay the foundation stone for the first Jewish Reform Synagogue in Manchester, so connections proliferate.  This was a large and very ornate silver trowel. One of our visitors laughingly suggested it might be Mrs. Gaskell’s cake slice! It would certainly have held a remarkably large piece of cake which I am sure Elizabeth would have enjoyed!

« It’s Back! Join Our Reading Course Online
Meet the Neighbours »