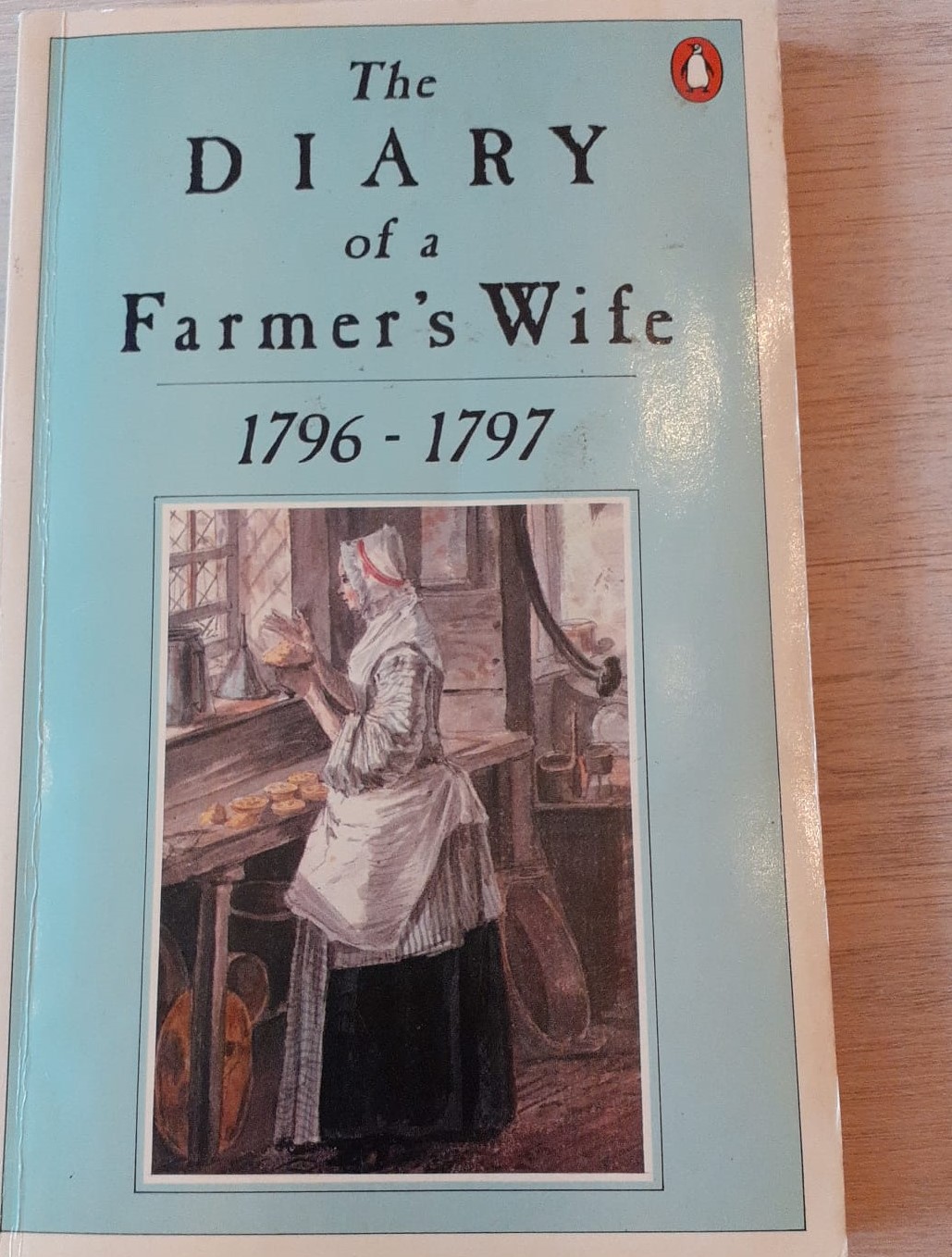 The selection of secondhand books we have at Elizabeth Gaskell’s House regularly turns up treasures – not news to those of you who are regular visitors to our monthly secondhand book sales, or who browse when you are visiting. Idly moving along the shelves recently I discovered a book called The Diary of a Farmer’s Wife 1796-1797. No author title. I was intrigued…

Elizabeth Holland, Elizabeth Gaskell’s mother was brought up on her parents’ family farm at Sandlebridge which was about three miles outside Knutsford. In 1797, she was married to William Stevenson, Gaskell’s father, from Sandlebridge. Elizabeth Gaskell herself, both as a child and as an adult, was a regular visitor to the farm – it remained in family ownership after her grandparents died. She writes to her sister-in-law Lizzie from Sandlebridge on 12 May 1836: I wish I could paint my present situation to you. Fancy me sitting in an old fashioned parlour, ‘doors & windows opened wide’, with casement window opening into a sunny court all filled with flowers which scent the air with their fragrance – in the very depth of the country – 5 miles from the least approach to a town – the song of the birds, the hum of insects the lowing of cattle the only sounds – and such pretty fields & woods all around…

Could the diary give me some idea of Elizabeth Holland’s life before she married William Stevenson, life on a farm at the very end of the eighteenth century? The book was mine!

And what a find – both the story the diary tells and also the serendipity of its preservation. The farmer’s wife is 24 year old Anne Hughes, living in a prosperous country farmhouse near Chepstow in Monmouthshire, as Elizabeth Holland who is 26, is living at Sandlebridge. For just over eighteen months, from February 1796 to August 1797 Anne kept a diary in wiche I write what I doe, when I hav thee tyme, and beginnen wyth this day Feb ye 6 1796. From the first entry, she leaps from the page with energy and humour:

March ye 6 – Yesterday we to the Lady Susan to drink tee. We did hav a verrie pleasant time, and we did sit in my ladies little parlour; me and Johns mother feeling verrie welcome there. The room was verrie fine, with grand chaires and littel tables. I did see some dust in the chair legs.

She seems to have written mainly in the evening when everyone was in bed, carving out some time for herself, and while Sarah her maid and her mother-in-law know she writes she does not disclose her diary keeping to her husband: I can rite no more in my book today, John bein in the house, I fere he nay see me.

However, she positions her diary as a public document which others might read and she writes in expectation of an audience: I do wonder where my little book will go , and who may read it. I shall always keep it, and perhaps if God do give me a son he will read it some day and so know what a fine man his father is.

The story of the diary’s survival is extraordinary. Anne Hughes did keep her boke, and passed it to her daughter Mary Anne Thomas (nee Hughes). When her daughter was in her eighties, she read extracts from the diary to her young neighbour, Jeanne Keyte. Jeanne also recorded the stories Mary Anne told her about her mother’s life because some day I’ll want to put them in a book. In the 1930s Jeanne was writing occasional articles for Farmers Weekly and responding to a request for a serial from her editor, she drew on Anne Hughes Boke which Mary Anne Thomas had given to her and crafted it for serial publication into the format we now have. The original of the diary is lost and it’s impossible to know what format it was first presented in. But Anne’s personality and her voice shine through the text which has survived.

While Sandlebridge was less isolated than Anne’s farm, her record of the unremitting hard work involved in farming for these men and women must describe the work Elizabeth Gaskell’s mother would have been used to and also points up the skills she took with her to support William Stevenson’s short lived attempt at making a living through farming in Scotland.

But what I am most struck by is the creative impulse which drove Anne to write her diary. Diaries are not verbatim records of a day’s activities. The writer must select what to record and polish what has been selected before committing it to the page. A diary tells an actively created and considered story of a life. Keeping the diary fulfilled a creative need for Anne Hughes: I being so bussie cannot write every day in my booke, but I shall do what I can, me liking it much.

I am reminded here of the creative impulse which drove Gaskell and which she analyses in the letter to Tottie Fox from February 1850: I am sure it is healthy for (women) to have the refuge of the hidden world of Art to shelter themselves when too much pressed upon by daily small Lilliputian arrows of peddling cares… Anne Hughes has more in common with Elizabeth Gaskell than I realized when I picked up the book – she has a habit of stories.

Check the date of our next secondhand book sale here

« Was Charles Dickens a Unitarian?
So why did you choose that plant? »