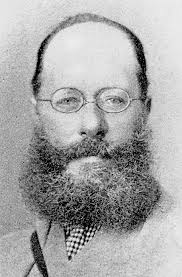 I’ve recently read a biography of Edward Lear who we now mostly remember for his nonsense verse and limericks – The Owl and The Pussycat anyone? One of my reasons for reading ‘Mr Lear. A Life of Art and Nonsense’ is that it’s also written by Jenny Uglow who has written the very wonderful biography of Elizabeth Gaskell, ‘ A Habit of Stories’ , and I was interested to see if Gaskell made any appearances in Lear’s story.

A contemporary of Gaskell’s, Edward Lear was born on May 12, 1812 in Holloway in London, and was the youngest of survive of his parents twenty one children. He was brought up by his sister Ann, twenty one years his senior and to whom he was very close all his life. He was a professional artist, travelling extensively across Europe and the Mediterranean, producing fine and detailed topographical studies which he marketed with great aplomb to friends and acquaintances. He was also a talented amateur musician who would play the piano to entertain guests at the many social gatherings he attended.

And he loved Elizabeth Gaskell’s novels, recording his praise in his diaries and letters! From a train in Vienna on 25 November 1857, he writes to his sister Ann: ‘…got my bag of books, & so became quite comfortable. I read away at the life of Charlotte Bronte – a most interesting biography – & I was so pleased with it.’

In his diary of 19 August 1875, he notes that ‘Sylvia’s Lovers is a wonderfully beautiful, but sad book‘ and later in the same year on 8 October he records ‘ I am reading just now a good deal of Miss Edgeworth’s books. Clever, undoubtedly – but not like Miss Austen or Mrs Gaskell’s – or C Bronte’s’. Again in his diary on 15 March 1860, he notes ‘ Dined alone. & read Adam Bede, the most singular book one has read since Mrs Gaskells, and C Bronte.’

And tantalizingly, we know from his diary that he dined with Elizabeth Gaskell and two of her daughters on Sunday 29 June 1862 while he – and presumably they – were staying with Stephen Lushington at Ockham Park in Surrey. Lear had a habit of noting the table plan and the names of fellow guests when he dined out and because of the wonderful transcripts of his diaries which are available at https://leardiaries.wordpress.com , we can see the plan he made and his diary entry for the day.

But his diary has no record of any conversation he had with Elizabeth Gaskell, and I can find no mention of him in any of her letters for this time. I’m intrigued – surely as such a fan of her work he would have wanted, at the least, to congratulate her? And wouldn’t she have wanted to record her impressions of him?

If anyone knows any more, please let me know!