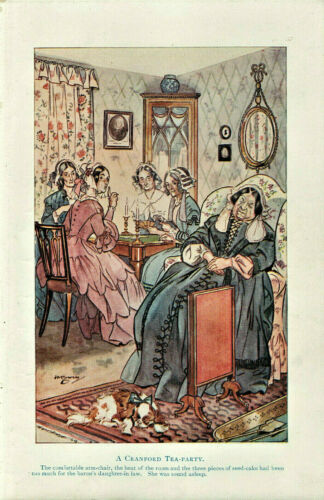 Following on from my last blog ‘Tea at Cranford’, I will now consider the dangers which may have been lurking in those dainty sandwiches, ‘cut to the imaginary pattern of excellence that existed in Miss Matty’s mind, as being the way which her mother had preferred’.

Bread for the ladies of Cranford was both part of their staple diet and a symbol of social standing. The Honourable Mrs Jamieson, sister-in-law to the late Earl of Glenmire, was most particular about the way food was presented to her guests. ‘Wafer bread-and-butter and sponge-biscuits’ were all that she would serve, partly because delicacy was tasteful and partly because it kept down the cost of entertaining. Elegant economy was the watchword for these Cranford ladies, and therefore when tea was served, it was served elegantly: ‘Very delicate was the china, very old the plate, very thin the bread and butter, and very small the lumps of sugar’. But tea was also the time to make new acquaintances and many friendships were ‘begun over bread and butter’ and ‘extended on to cards’.

Even Cranford’s doctor, Mr Hoggins, is defined by the food he consumes. Elizabeth sets him apart from these ‘ladies’ as there is no elegance or delicacy in the way he ‘sups on bread-and-cheese and beer every night’ and he is disparaged by the likes of Mrs Jamieson, Cranford’s arbiter of taste.  But even humble fare can reflect degrees of social standing; Mr. Hoggins is affluent enough to afford a daily diet of cheese to accompany his bread. In Mary Barton, we learn that workers such as John Barton who experience fluctuating fortunes only feast ‘(after the sale of some article), on an unusual meal of bread and cheese’.

Elizabeth Gaskell is known for her wealth of domestic detail and in Cranford she gives us some fascinating insights into uses of bread during the mid-ninetieth century. Mrs Forrester is famous in Cranford for her bread-jelly, a present of which ‘was the highest mark of favour dear Mrs Forrester could confer….[A] a mould of this admirable, digestible, unique bread-jelly was sent by Mrs Forrester to our poor sick conjuror’ Signor Brunoni. Bread jelly was made by boiling bread until it reached a point when it became a semi-clear jelly. It was then left to cool for a while before fruit was added for flavour. A brief method is included on the Foods of England Project website from a recipe dated 1954. Bread soaked in milk was also considered nutritious for invalids and often given to babies. Elizabeth writes about this in Mary Barton when Job Legh travels with the infant Margaret from London to Manchester, stopping in Birmingham where he tries to assuage her hunger with bread soaked in milk.

So bread was an important food, but was it safe?

After having established that the Victorians were subjected to adulterated tea, it would appear that flour was subjected to similar adulteration. In an article entitled Death in the Bread Basket published in Household Words on 28 December 1851, Charles Strange began by asserting that bakers sometimes added potatoes, alum, magnesia, and other substances to flour, to give it a white appearance, particularly in an inferior flour mix.

‘Ask a baker why he puts alum?  he tells you “it keeps water and raises well,” meaning, we suppose, that it improves the look of the bread, rendering it firmer and whiter.‘

In this way loaves were also made heavier, thus keeping manufacturing costs down and raising profits. While alum was not usually harmful to healthy individuals, it could be detrimental to those with weak constitutions. Moreover, it was not always just the baker who added alum, ‘sometimes it was the wholesale flour dealers who in large towns supply the bakers with the corn ready ground’. If flour was adulterated then any home baked products using white flour could also carry these additives, even the tea –bread and sponge cakes home baked in Cranford may not have been ‘safe’. A medical study in 1851 found alum in every loaf of bread tested from a random sample. What was even worse though, was the addition of plaster of Paris to the flour mix. The article continues by writing about :

‘a gentleman who, whenever he visited Newcastle-under-Lyne, Staffordshire, was invariably seized with severe pains in the stomach; he suspected it was caused by the bread he had eaten.‘

The investigation that followed found the baker innocent and issued the miller a substantial fine for malpractice.

This was a particular problem for those practising ‘elegant economy’ as it was cheap flour that needed to be whitened. Thus, it was often the working classes who suffered as bread was their main source of sustenance. Workers often spent a large percentage of their weekly wage on loaves of bread which cost about 1 shilling each out of a weekly wage of about 12 shillings [this is an old shilling now represented by 5p]. Therefore, it is little wonder that bread is mentioned over forty four times in Mary Barton. Here, as in Cranford, it is a symbol of hospitality, but in Cranford it represents more the art of conspicuous consumption than the selfless act of friendship displayed by the Bartons unstinting hospitality despite their limited resources. Mary is told by her mother: ‘you must get a pennyworth of milk and a loaf of bread—mind you get it fresh and new—and, and—that’s all, Mary’. Notice that it is bread and milk that are required and it is bread that keeps those in extreme poverty alive. When John Barton literally brings the bread of life to the starving Davenports:  ‘they clustered round Barton, and tore from him the food he had brought with him. It was a large hunch of bread, but it vanished in an instant’. Mrs Jamieson’s ‘wafer thin’ slices of bread and butter would be of little use here. Yet how far might this life giving food actually injure the lives of those it was purchased to save?

In The English Bread Book published in 1857, Elizabeth Acton calls bread ‘the first necessity of life to the great mass of the English people‘, explaining how:

‘The grievous wrong of gross adulteration and of short weight falls the most oppressively on the very poor – often on those who are surrounded by half-famished children, for whom their utmost efforts can scarcely procure the means of life.‘

Acton is also a great advocate of home baking which, though often cheaper and healthier, was not a favourite among many factory workers who after long gruelling days, were not inclined to begin the time consuming process of bread making. Perhaps the clap-bread of Cumberland and Westmoreland that old Alice is so proud to serve to her guest was, after all, a healthier option. Being made with oat meal, these wafer thin cakes did not rely on whiteness to enhance their desirability. If you attended the ‘Friends’ event on Humble Life at Elizabeth Gaskell’s House in 2019 you would have been able to sample some of this delicious clap-bread.

If you missed Diane’s blog about tea drinking, you can find it here.

Do visit our new exhibition about Cranford here at the House. We serve delicious tea and cake and can promise it is adulteration free! And buy one of our lovely mugs as a memory of your visit and for your home tea drinking!

« Tea at Cranford: Charlotte Bronte and the Great Victorian Tea Fraud
Save The Honresfeld Library »