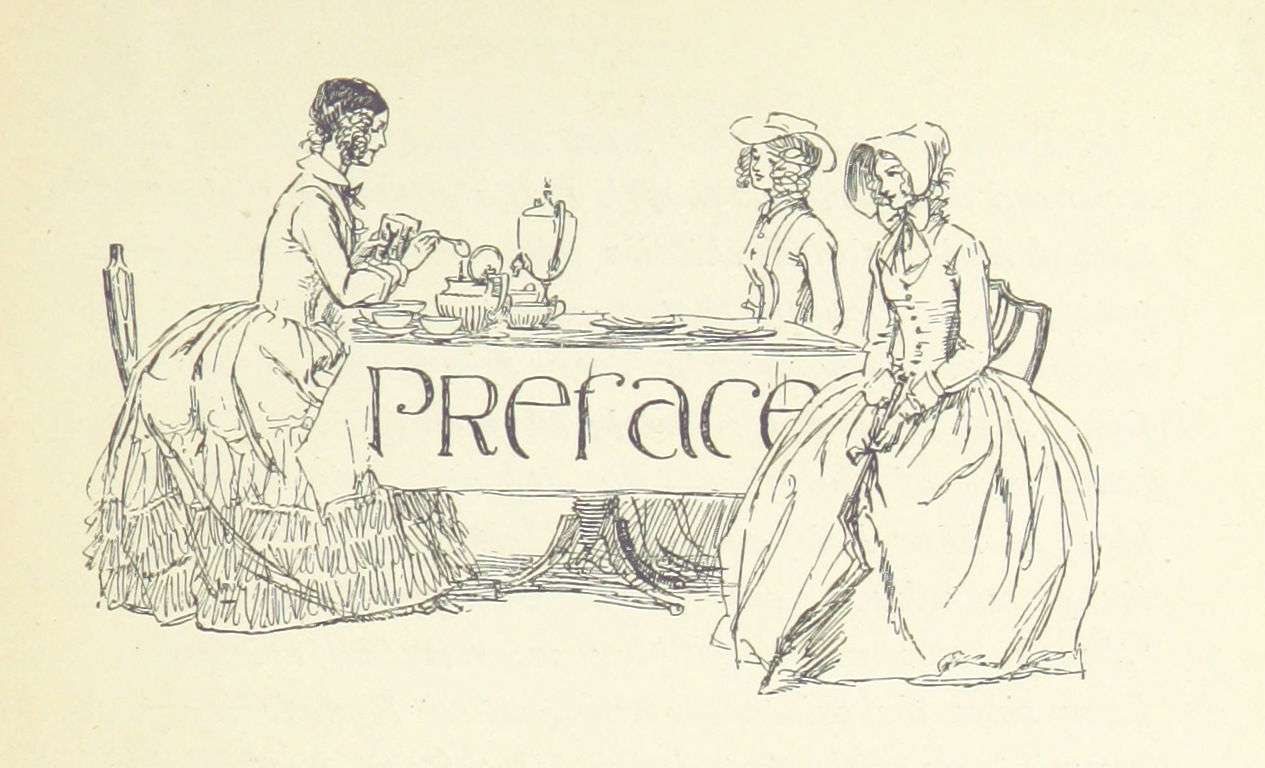 Tea plays an integral role in Elizabeth Gaskell’s novel Cranford. Grown in India, a British colony, and imported by the East India Company, tea became a national beverage which could be found in practically every household. But tea was more than just an infusion of dried leaves it was he beverage that was consistently turned to when spirits were in need of reviving. It is a word that prefixes so many others to indicate its numerous uses and association. Just skimming through Cranford we find tea- bread, tea-tray, tea chests, tea shop and teaspoons. Then of course there was tea- time and tea itself which was not just a beverage but an occasion to eat dainty sandwiches or cake with your tea. Tea drinking in amicable company either at home or in a tea shop became a symbol of civilised British society and hospitality. In Cranford it often broke the ice in awkward social situations ‘After tea we thawed down into common-life subjects’, but there was no escaping its representation of social status. It could be a sign of pride or embarrassment:

‘The tea-tray was abundantly loaded—I was pleased to see it, I was so hungry; but I was afraid the ladies present might think it vulgarly heaped up.  I know they would have done at their own houses; but somehow the heaps disappeared here.  I saw Mrs Jamieson eating seed-cake, slowly and considerately, as she did everything; and I was rather surprised, for I knew she had told us, on the occasion of her last party, that she never had it in her house, it reminded her so much of scented soap.  She always gave us Savoy biscuits.  However, Mrs Jamieson was kindly indulgent to Miss Barker’s want of knowledge of the customs of high life; and, to spare her feelings, ate three large pieces of seed-cake, with a placid, ruminating expression of countenance, not unlike a cow’s.’

Tea was the only product Miss Matty would consider selling after suffering financial losses with the collapse of the Town and County Bank.  In fact it even proves Mary, the narrator with the inspiration for her suggestion that Miss Matty could run a tea-shop:

‘…when the tea-urn was brought in a new thought came into my head.  Why should not Miss Matty sell tea—be an agent to the East India Tea Company which then existed?  I could see no objections to this plan, while the advantages were many—always supposing that Miss Matty could get over the degradation of condescending to anything like trade.  Tea was neither greasy nor sticky—grease and stickiness being two of the qualities which Miss Matty could not endure.  No shop-window would be required.  A small, genteel notification of her being licensed to sell tea would, it is true, be necessary, but I hoped that it could be placed where no one would see it.  Neither was tea a heavy article, so as to tax Miss Matty’s fragile strength.  The only thing against my plan was the buying and selling involved.‘

Buying and selling was, of course, ‘trade’ and therefore counter to Miss Matty’s status as a respectable ‘lady’.  However, it was redeemed as an enterprise because it was clean, light and  generally only sold to women:

‘she did not think men ever bought tea; and it was of men particularly she was afraid.  They had such sharp loud ways with them; and did up accounts, and counted their change so quickly! ‘

The writing of Cranford followed hard on the heels of Charlotte Bronte’s long awaited first visit to Elizabeth’s house in Plymouth Grove, Manchester on the 21 June 1851. It was during this visit that Alice Chadwick, Elizabeth’s first biographer, records an amusing anecdote about the respective qualities of green and black tea and Charlotte’s preferences. When Charlotte was asked if she asked if she preferred to drink tea or coffee:

‘Tea,’ was the reply ; ‘but please see that there is no green tea mixed with it, as I am never able to sleep after partaking of a cup of tea that contains the least particle of green leaf.’ Mrs. Gaskell praised green tea, saying that she thought a mixture of green and black blended well and made the beverage stimulating; but Miss Bronte objected. Mrs. Gaskell knew that the tea she used was a mixture of green and black. It was impossible to obtain any other at that time of the evening, as Plymouth Grove was some distance from any shops in those days, and so the tea was made as usual without the guest knowing that it contained green. The next morning Miss Bronte was asked how she had slept. ‘Splendidly’, was the reply, and a smile went round the breakfast table. (1910, p. 260)

This episode is later echoed in the pages of Cranford when Miss Matty states her preference for the less stimulating black tea.

‘If she was made aware that she had been drinking green tea at any time, she always thought it her duty to lie awake half through the night afterward (I have known her take it in ignorance many a time without such effects), and consequently green tea was prohibited the house‘

But while this subtle trickery raises a smile, there might be a reason why Charlotte was not affected by the green leaves she sampled in the drawing room at Plymouth Grove.

In December 1850, exactly six months before Charlotte’s visit to Manchester, Dickens published an article in Household Words entitled ‘Death in the Teapot’ which exposed manufacturers for adulterating tea and it all happened in Manchester.   A Manchester chemist became suspicious after being applied to for a large quantity of French Chalk; within a two month period he had sold upwards of a thousand pounds of the substance.  Suspecting some sort of trickery, he decided to set up his own experiments on samples of green tea, only to find  that ‘a great deal, if not all the common green tea used in this country is coloured artificially’. The test performed on these samples was quite simple:

A few spoonfuls of green tea at five shillings a pound, were placed on  a small sieve, and held under  gentle stream of cold water flowing from a tap for the space of four or five minutes. The tea quickly changed its colour from
green to a dull yellow, and upon drying with a very gentle heat gradually assumed the
appearance of ordinary black tea.

The substances found to be used as colourings were Prussian blue, turmeric and French chalk which, when mixed together:  ‘in very fine powder,… will give a green of any required shade. It is made to adhere to the tea-leaf by some adhesive matter, and then it is “faced” by the French chalk, to give it the pearly appearance so much liked.‘

This piece of investigative journalism is not likely to have completely curbed the flow of adulterated tea, thus it is quite likely that Charlotte was actually drinking coloured black tea which would explain why she was unaffected by the beverage and slept ‘Splendidly’.

Nothing is new it seems and Dickens’ work is a very early example of what we have come to see regularly on television and in social media, programmes such as Watchdog, Rogue Traders and fake Britain. Throughout history traders have tried to manage the fine balance between keeping down costs and maintaining public safety, some did not always achieve that balance as we will see in Dickens’ later articles on food adulteration which had fatal consequences- ‘Death in the Bread Basket’ and ‘Death in the Sugar Plum’.  Both of these have relevance to Elizabeth Gaskell’s writing.

Want to know more about Cranford?
Visit our new exhibition – A Love Affair with Cranford