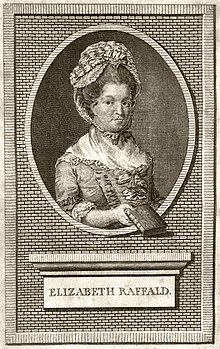 She’s credited with inventing the Eccles cake. She wrote one of the two best-selling cookery books of her times – the other was written by Hannah Glasse – and her recipes were much plagarized by Mrs Beeton. And in 1772, she published The Manchester Directory, a listing of 1505 traders and civic leaders from across the City, which was the first such trade listing available for Manchester: The want of a directory for the large and commercial town of Manchester having been frequently complained about I have taken on the arduous task of compiling a complete guide.

And for those of you still guessing, she’s Elizabeth Raffald.

Born Elizabeth Whittaker in Doncaster in 1733, she was in service as a kitchen maid by the time she was 15. At 27, she was working as the housekeeper for the Warburton baronets of Arley Hall in Cheshire, earning £16 a year – the equivalent of £2500 today. When she married John Raffald, the estate head gardener, she moved with him to Manchester where they lived in Fennel Street close to John’s family market garden on the banks of the river Irwell. John opened a florists near Fennel Street while Elizabeth gave birth the first of her nine children and opened a domestic agency, brokering introductions between domestic workers and potential employers. At the same time she was also running a cookery school and selling food from her premises supplying cold entertainments, hot French dishes, confectionaries etc.

The business on Fennel Street was very successful and she soon moved to larger premises on Exchange Alley selling jellies, creams, possets, flummery, lemon cheese cakes and all other decorations for cold entertainments also Yorkshire hams, tongues, brawn, Newcastle salmon, and sturgeon, pickles, and ketchups of all kinds, lemon pickles…

She published her famous cookery book in 1769. The Experienced English Housekeeper is dedicated to Lady Warburton, her former employer, and includes a recipe for Bride Cake which is agreed to be the first recognisable recipe for wedding cake! The cookery book was based on her own considerable practical experience – unlike that of Mrs Beeton! – and she wrote I can faithfully assure my friends that (the recipes) are wrote from my own experience and not borrowed from any other author. In the second edition of the book, her publisher asked her to change some of the Mancunian dialect she used. She refused to compromise and modify her authentic voice: What I have written I proposed to write at the time; it was written deliberately; and I cannot admit of any alteration.

With John, she ran two important post houses in Manchester and Salford before running into financial difficulties which were perhaps caused by and certainly exacerbated by John’s drinking. He certainly seems to have exasperated her – when he told her he was contemplating suicide she wrote I do think it might be the best step you could take, for then you would be relieved of all your troubles and anxieties and you really do harass me very much. He reconsidered and outlived her into his 80s!

She died suddenly in 1781 just after publishing the third edition of her Directory and still updating the eighth edition of her cookery book After her death, the book ran into 15 official editions and 23 pirated ones – a success indeed. We sell Eccles cakes in our tea room, of course we do! When you next visit us, celebrate an amazing Manchester cook and writer with tea and an Eccles cake!

Elizabeth Raffald’s nephew, George, built the Arden Arms in Millgate, Stockport which is still open and which celebrates her with a commemorative blue plaque: Elizabeth Raffald. 1733-1781. Author, entrepreneur, benefactor whose family built this pub in 1815 and who lies buried nearby in St. Mary’s churchyard. Wrote The Experienced English Housekeeper in 1769

« A Love Affair with Cranford
Tea at Cranford: Charlotte Bronte and the Great Victorian Tea Fraud »