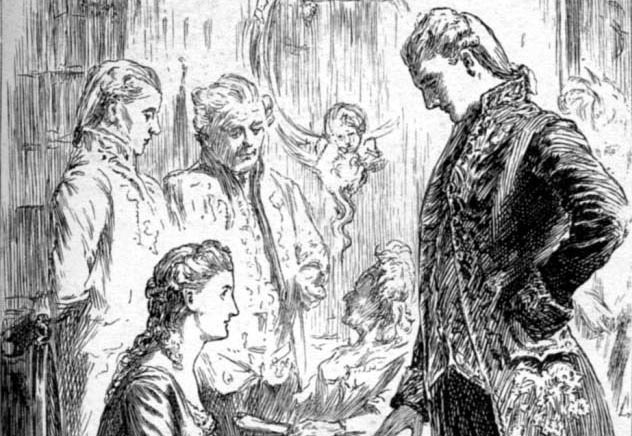 Posted
15th May 2020
in blog, Gaskell House Blogs, Literature, other

The Grey Woman is a short story by Elizabeth Gaskell in the Tales of Mystery and the Macabre collection. It was first published in January 1861 in volume IV of Charles Dickens’ All the Year Round. This is an edited version of a blog by Diane Duffy for the Gaskell Society’s This Month in Writing series and you can read the full version Here

Elizabeth Gaskell’s The Grey Woman is, out of all her short stories, one of my personal favourites and it is only just beginning to be given the critical attention it deserves. Renzo d’Agnillo describes it as ‘one of her finest and most powerful tales’ and I would not disagree!  For me, it is a complex and disturbing story that never disappoints no matter how often it is read.

All Elizabeth Gaskell’s stories exhibit characteristic features, one of which is the inclusion of a short travel sketch. In The Grey Woman the destination is Heidelberg, Germany. Elizabeth visited three times: once in 1841 with William, then in 1858 and 1860 with three of her daughters. The story opens in the tea gardens of a mill on the banks of the River Neckar where in “184_ a traveller ‘went to drink coffee…with some friends”. Elizabeth’s love of food is obvious here as elsewhere in her writing. This passage brings to mind a letter where she writes of her disappointment that no tea, coffee or cake had been available to purchase on her trip to Mannheim with Flossy in 1858. In fiction, you can rewrite history!

However, this opening does more than merely provide an opportunity for Elizabeth to share her experiences as a traveller; it creates a comfortable domestic environment and then shows the fragility of such a concept when a violent storm disrupts the peace of this scene. Storms are typical features of Gothic texts as they add atmosphere, but this storm is far more sinister, for it reveals the darkness and violence below the surface of social gloss: “We had nearly finished our coffee, and our “kucken,” and our cinnamon cake, when heavy splashes fell on our thick leafy covering; quicker and quicker they came, coming through the tender leaves as if they were tearing them asunder”.

Elizabeth Gaskell is masterful at presenting a surface image and then forcing her readers to look beneath where nothing is ever as it seems. Monsieur de la Tourelle, Anna’s prospective husband is superficially attractive but his attraction soon fades as Anna begins to become tired and then fearful of his lisping affectations, his social gloss: “Then he tried German, speaking it with a kind of soft lisp that I thought charming. But, before the end of the evening, I became a little tired of the affected softness and effeminacy of his manners, and the exaggerated compliments he paid me”. While Elizabeth’s presentation of de la Tourelle does break conventional gender boundaries, as many critics have pointed out, it is also an example of Elizabeth’s adept use of contrasts. De la Tourelle’s soft and feminine exterior is the exact opposite to his dark and cruel nature, similarly Anna’s maid/husband, Amante, has a masculine appearance but a soft and paternal nature. In turn, these two ‘husbands’ are also contrasted to allow readers to understand Elizabeth Gaskell’s criteria for a successful marriage.  As a Unitarian, Elizabeth saw the need for marriage to be an equal partnership not an abusive misuse of legal power-husbands had complete power in law over their wives until after the Married Woman’s Property Act was introduced (between 1870 and 1882).

We have talked of the Gothic influences in The Grey Woman, but it is difficult not to read this text and see similarities between Amante and the ‘magnificent’ Marion Halcome, in Wilkie Collins’ The Woman in White, published during the second half of 1859 and classified as sensation fiction. Marion too was an example of gender fluidity, a woman who had many male characteristics, not only facially with hair on her upper lip, but also in her forthright and fearless behaviour. Yet even Collins’ depiction of gender is less radical than Elizabeth Gaskell’s arrangement of a marriage between two women.

Another similarity between these stories is the inclusion of a pale heroine, a ghostly figure in Collins and a grey woman in Elizabeth Gaskell’s work. Ghosts, doubles, female incarceration, all these features are taken directly from Gothic fiction. Gothic motifs and narrative techniques haunt the text. For example, a hidden manuscript takes the central narrative position.  This manuscript is Anna’s story, and like the story of most women throughout history, is never publicly told, never published, and so becomes hidden from history. Some critics have suggested The Grey Woman is a reworking of Bluebeard and there are certain similarities – hints at a previous dead wife; de la Tourelle’s determined efforts to find and kill Anna and, of course, the circumstances of her escape. Gothic romance, sensation fiction or perhaps fairy tale-how do we read this text? Genre becomes yet another boundary that Elizabeth Gaskell breaks to produce a hybrid text that defies definition. No boundary seems to escape her adept pen; she even challenges the class divide by marrying the mistress of a chateau to a servant.

‘A Tale Founded on Fact’

The themes of fairy tale, fable, and Gothic romance separate this text from the novels of realism that were gaining popularity during the mid-19th century, a genre evident in Elizabeth’s ‘industrial novels.’  Elizabeth states that the story is ‘true’: “the story I am going to relate is true as to its (sic) main facts and as to the consequence of those facts from which this tale takes its title.” Two areas have a historical basis. One is Monsieur de la Tourelle’s band of ruffians, the Chauffeurs, brigands who were active around the time of the French revolution and used to force their victims to pay ransoms by holding their feet in fires. Elizabeth Gaskell’s de la Tourelle takes this torture even further; he is careless of other’s lives and has on many occasions resorted to murder. But an even more powerful connection to real events is Anna’s marriage to a handsome but deadly husband. Anna’s history as the wife of Monsieur de la Tourelle has close links to a narrative from French history which Elizabeth reproduced in French Life, that was published in parts for Fraser’s Magazine between April and June 1864.

This tale of the marriage and murder of the Marquise de Ganges by her husband and his brothers is well documented. Elizabeth was allegedly introduced to it during a journey through France in 1863, although it had previously appeared in Alexandre Dumas’ collection of Celebrated Crimes in 1843.  In part III of French Life Elizabeth comments on the way a woman is vulnerable even in her own home, but, consigns this position of vulnerability and disempowerment to history:

“It gives one an awful idea of the state of society in those days (reign of Charles II. in England), to think of this helpless young woman, possessed by a too well-founded dread, yet not knowing of any power to which she could appeal for protection, and obliged to leave the poor safety of a city to go to a lonely house, where those who wished her evil would be able to work their will.”

“On New Year’s Day 1856, Elizabeth makes it quite clear that the disempowerment of women was not just a thing of the past. In a letter to her friend Eliza Fox, she writes: A husband can coax, wheedle, beat or tyrannize his wife out of something and no law whatever will help this that I see.”

Whether there is any improvement in our modern world is for you to decide!