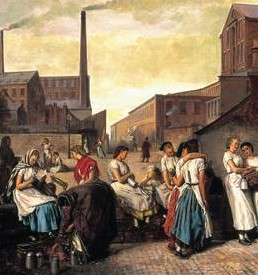 On 18 October, Mary Barton is published in two volumes to critical acclaim. Gaskell receives £100 for the copyright, which is about worth around £12,000 today, though she does receive an additional £100 on the publication of the second edition of the book.

1848 is an enormously important year for Elizabeth Gaskell. But what else is happening that year? This will be an occasional blog series exploring what political, historical and social events are taking place in the wider world while the Gaskell family is celebrating its important if personal milestones. The idea is shamelessly stolen from Jonathan Schofield who recently gave us volunteers a fascinating talk about becoming the best tour guides we can be, and it links with the new time line installed in our exhibition room which you can enjoy when you next visit the House!

So, it’s 1848, and Queen Victoria is on the throne. The Gaskell family is living in Upper Rumford Street – they won’t move to Plymouth Grove until 1850. And in a rash of September birthdays, in 1848 Elizabeth will be 38 on the 29th; Marianne, her eldest daughter 14 on the 12th; and Julia, her youngest will be 2 on the 2nd.

22 February and revolution breaks out in France. Charles Halle leaves Paris where he has been living, and by March is in Manchester running the Manchester Gentlemen’s Concert series. He will later give piano lessons to Marianne Gaskell and more importantly perhaps, set up the Halle Orchestra!

In May, a report reveals the scandal of the conditions at Huddersfield workhouse which it describes as wholly unfitted for residence for the many scores that are continually crowded into it, unless it be that desire to engender endemic and fatal disease.

The Great Potato Famine is raging in Ireland. In July, famine victims on outdoor relief peak at almost 840,000.

On 11 July, Waterloo station opens in London.1848 is a big year for railways. On 15 February, the final part of the Caledonian railway between Carlisle and Edinburgh opens – the West Coast Main Line now provides the first service of through carriages between Scotland and England. And on 12 August, George Stephenson, the railway pioneer and the Father of the Railways dies. He never sees the opening of the first bookstall at a railway station – WH Smith opens at Euston station on 1 November.

On 19 December, Emily Bronte dies at Haworth Parsonage. She is only thirty. It’s a year of tragedy for the Bronte family as Branwell has also died that year on 24 September.

« Exploring the well-being impact of online events
My life with Lily – Mrs Gaskell, Cheshire, Manchester and me »