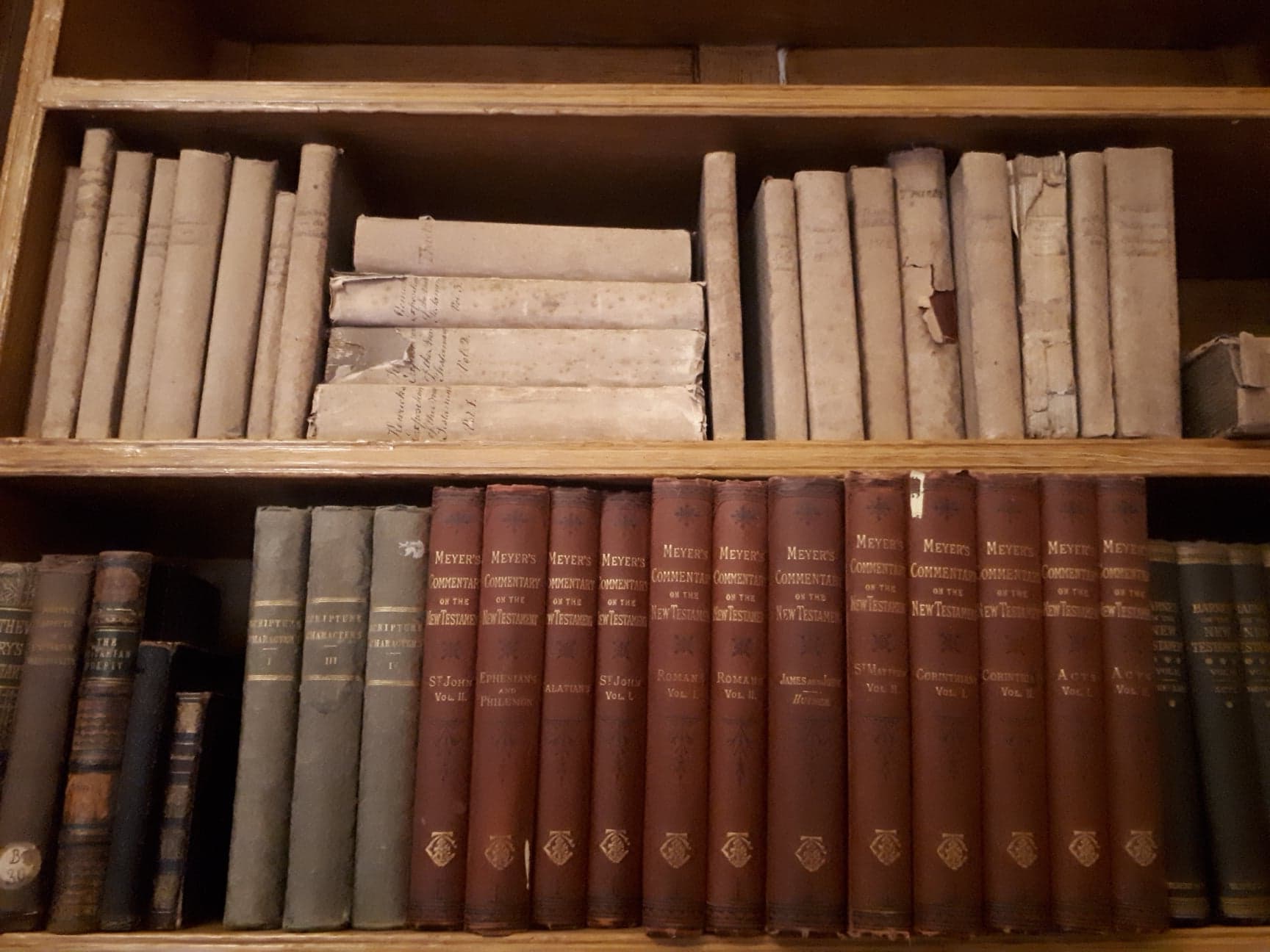 As you walk into William’s study, you can see on the right-hand side, three shelves from the top, a most uninspiring-looking collection of books, all wrapped in dull  brown paper. Yet on inspection these turn out to be, possibly, the titles most likely to have been in William’s personal library during his lifetime, apart from, of course, those titles by his wife Elizabeth.

This is a collection which has come to us from a Unitarian Chapel and which deal with the fundamentals of Unitarianism and aspects of Christianity. All 20 volumes have an inscription inside which reads Shaws Lane Chapel Vestry Library.  This  Chapel in the Altrincham area,  was a daughter church of Hale Chapel, founded 1814, which was replaced in 1872 by Dunham Road Unitarian Church,  which still exists.

William Gaskell was a Unitarian minister in Manchester from 1828-1884. From 1865, he served as President of the Assembly of Presbyterian and Unitarian Ministers of Lancashire and Cheshire, so it is highly probable that he would have visited the Unitarian Chapels of the area, including Shaws Lane Chapel or the later church at Dunham Road and possibly even handled these books.

So, what sort of books are in this collection?  While still old copies, most seem to be later editions of key works of early Unitarianism.  Many of the authors are probably unfamiliar to most of us today, but would have been important to William as a minister and one or two names do jump out.

Investigating more about William Gaskell, I learn that his personal theology was inspired by Joseph Priestley, an influential thinker, theologian, chemist and teacher. Probably best known as a scientist and  the discoverer of oxygen, Priestley was also deeply involved in politics and religion. He left England for America where he helped to advocate Unitarian ideas. He  believed in the free and open exchange of ideas, advocated toleration and equal rights for religious Dissenters, and influenced Unitarianism in England where the first Unitarian Church was established in 1774. In our collection we have 2 titles by Joseph Priestley: Familiar illustration of Certain Passages of Scripture  and The Institute of Natural and Revealed Religion 2 vols An Essay ( we have vol 2 only).

Another interesting author represented in the collection is W.J.Fox (1786- 1864).  We have A Course of Lectures in Genuine Christianity (3rd ed 1822). Early in 1810, William Johnson Fox took charge of a congregation at Fareham in Hampshire. Failing to make a small congregation there viable, he left within two years to become minister of the Unitarian chapel at Chichester. In 1817, Fox moved to London where he became involved with the important political radicals of the day, including Chartists and early feminists. He fell out of favour in the church  when he left his wife for one of his wards and became an advocate of freer divorce. This led to him being removed from Unitarian ministry, though he continued to preach rationalism.  As a supporter of the Anti-Corn-Law movement, Fox won fame as an impassioned orator and journalist, and from 1847 to 1862 he intermittently represented Oldham in Parliament as a Liberal.

The oldest book in the collection dates from 1798 (unsure of date of 1st edition) and is Of the Truth of the Christian Religion by David Hartley. David Hartley, 1705- 1757 (deceased before Unitarianism was founded in England) was an English philosopher and founder of the Associationist school of psychology (to do with the association of ideas and memories). He is also known to have been a friend of Joseph Priestley. Originally planning to be a clergyman, Hartley was deterred from taking orders by scruples against signing the Thirty-nine Articles (the doctrines of the Church of England), and took up the study of medicine.

Other little-known (to most of us) authors in the collection are surely of interest to those wishing to learn more about the history of Unitarianism. Born about 1672, Hopton Haynes entered the service of the Royal Mint as weigher and teller in 1696 or early in 1697, almost at the same time as Isaac Newton was appointed Warden. Haynes was close to Isaac Newton, the famous astronomer, mathematician, philosopher and author. We have Haynes’ book The Scripture Account of the Attributes and Worship of God 1815.

Hugh Farmer (1714 – 1787) was an English Dissenter and theologian who was educated at the Dissenting Academy and became pastor of a congregation at Walthamstow, Essex. In 1701 he became a preacher and one of the Tuesday lecturers at Salters’ Hall, London. He was a believer in miracles, but wrote against the existence of supernatural evil as he viewed the devil as allegorical. We have his Dissertation on Miracles (3rd ed.1810 1st published  1771). We also have the 5th edition (1822)  of his work An Inquiry into the Nature and Design of Christ’s Temptation in the Wilderness.

The most seminal work is probably Richard Wright’s Plain View of Unitarian Christian Doctrine (1815). In 1806 the Unitarian Fund was established in London, with Wright as the first travelling missionary. In 1810 he resigned his position at Wisbech, to devote himself entirely to itinerant work. His travels took him through most parts of England and Wales, and in Scotland as far as Aberdeen. He will surely have visited Manchester, as it is known that he visited Oldham in 1812.

This collection, which includes more authors and titles, represents the writings of some of the most important early Unitarians. As such, the books have been  physically well-cared for. They have all been carefully and permanently wrapped in now-old, brown paper. In some of them it is possible to see how the paper has been stuck down with sealing wax. I believe that a few have been rebound at some point in their lives. There is a collection of Tracts, which is actually a number of shorter sermons, bound together. While one or two are in poor condition internally and most show signs of having been kept in damp conditions at some point, several of them are very clean reading copies.

It is wonderful that the collection found its way to us when William Gaskell’s study was restored. I’m sure that William will have read these works during his lifetime and will undoubtedly have met several of the authors, either here at Plymouth Grove or at many of the Unitarian chapels in the area.

« From our House to yours
The Story of a Unitarian Chair »