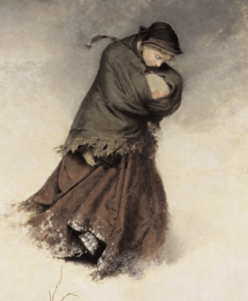 It’s a hugely busy year for Elizabeth Gaskell! On January 10, Ruth – perhaps Gaskell’s most controversial novel – is published. Frankly confronting Victorian attitudes to seduction and illegitimacy, it was never going to have an easy reception – it was a brave book for Gaskell to write. Published in three volumes on January 10 by Chapman and Hall, it cost £1/11/6 (£1.57.5p) and Gaskell received £500 for the copyright. Between January and May, five installments of Cranford appear in Household Words. She also prepares a stand alone piece, Cumberland Sheep Shearers, for the magazine which appears on January 22. Her output is truly prodigious – the first and second parts of Morton Hall and My French Master are in Household Words in November and December. Every issue of the magazine this year seems to include Gaskell!

Reading accounts of her 1853 travel and visiting schedule leaves me breathless! In the middle of May, she’s in Paris with William, then spending time in London from the end of the month until the middle of June. She’s away for the whole of July in Wales and then travelling in France. And this is the year that she and Charlotte Bronte cement their friendship. Charlotte Bronte has a week at Plymouth Grove from April 21 to 28. After this visit, Gaskell writes : I thoroughly loved her before she left, – and I was so sorry for her! She has had so little kindness & affection shown to her; she said that she was afraid of loving me as much as she could , because she had never been able to inspire the kind of love she felt. Gaskell returned this visit later in the year when she stayed with Charlotte Bronte at Haworth in September. After she leaves, Charlotte writes: After you left, the house felt very much as if the shutters had been suddenly closed and the blinds let down. One was sensible during the remainder of the day of a depressing silence, shadow, loss and want. However, if the going away was sad, the stay was pleasant and did permanent good.

So what’s happening in the rest of the world?

If you want to know more about some key years in Gaskell’s life check out others of our time line series here, here and here.