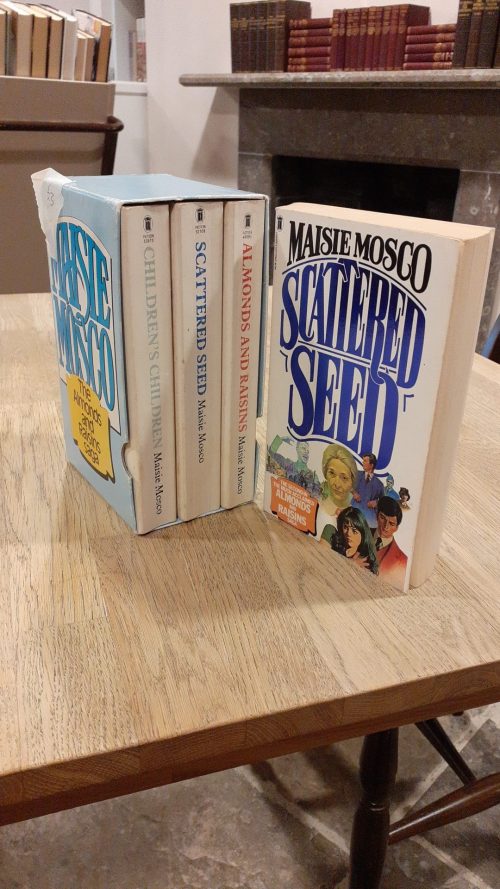 I’ve been wanting to celebrate Maisie Mosco as a Manchester woman writer for some time. I found a set of her popular Almonds and Raisins trilogy in our wonderful second hand book sale and read it with great pleasure, and I have read Louis Golding’s Magnolia Street in the past which tells a similar story. And our recent blog about the re-opening of the inspiring Manchester Jewish Museum has given me the push I needed!

The trilogy is made up of three novels: Almonds and Raisins published in 1979, Scattered Seed (1980) and Children’s Children (1981). These were followed by Out of the Ashes in 1990, and New Beginnings in 1992, which I haven’t yet read. The first three books follow the Sandbergs, a Jewish family arriving in Manchester from Russia in the early twentieth century to escape the Jewish pogroms, and trace their busy history and the history of Jewish people in Manchester until the 1960s. The books are a page turning read in the best tradition of the family saga!

Maisie Mosco drew on the history and experiences of her own family in creating the characters and the scenarios she explores in the books. She was born in Oldham on December 7, 1924 and was the eldest child in her family. Her mother and father were of Viennese and Latvian Jewish heritage, and had emigrated with their families to Manchester early in the 1900s. Her father Nat Gottlieb became a draper and by the early 1920s, a general dealer trading at 612 Manchester Road. He married Maisie’s mother, Fanny Margolis at the Manchester Great Synagogue in 1923. The family had moved to Prestwich before brother Cyril was born in 1927, followed later by her sister Thelma. Maisie Mosco wanted to study medicine but the illness of her mother meant that she had to leave school in 1938 when she was 14 to work in the family business. In 1942, she joined the ATS and after the Second World War, edited the Jewish Gazette, a Manchester Jewish weekly newspaper. She was married twice: to Aubrey Liston in 1948, and then to Gerald Mosco in 1957. As well as writing numerous radio plays for the BBC, between 1979 and 1998, she wrote 16 novels including the Almonds and Raisins series. She died in 2011, and in 2014 was commemorated when a new classroom block at the Oldham Blue Coat School was named for her. I hope she would have approved.

I’m sorry I’m not been able to find out any more about her, though the Manchester Jewish Museum tells plenty of stories which resonate with hers. She was obviously a talented writer and I wonder how she discovered this? I haven’t even been able to find a photograph of her. I’m hoping you might be able to send me some more information – our Manchester women’s writers deserve to be celebrated!

« 1810 is Elizabeth’s birth year – but what else is happening?
Halloween Half Term Family Fun »